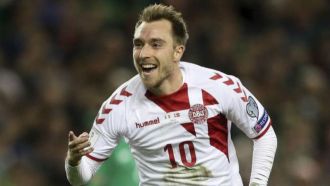 Eriksen is on Real Madrid's list to eventually replace Modric

The investment to bring Luka Modric to Real Madrid in 2013 was a smart one, it's no coincidence that since the Croatian arrived, the club's dominance of European football started, but given its age, Christian Eriksen is on Los Blancos' list to replace him in the future.

There are no indications that any such move will be on the agenda this summer, however those in power at the Estadio Santiago Bernabeu are aware that the veteran midfielder will not improve at 32 years old.

He's been so pivotal to Zinedine Zidane's team, the perfect illustration coming in Saturday's Champions League final, that it will be impossible to replace him perfectly.

Players like Modric don't come around too often, although it must be stressed that Real Madrid are in no rush to move on for him.

Consider this a requisite plan for the future, rather than an immediate goal, especially with the European champions having more pressing concerns in attack ahead of the summer transfer window.

The club may have been accused of showing disrespect by Cristiano Ronaldo, yet they're merely doing their duty to ensure there is a plan for every eventuality.

Eriksen is 26 years old himself, but still has many more years left at the top level than Modric, or at least that's what common sense would suggest.

His hat-trick against the Republic of Ireland in the World Cup play-off secured Denmark's place in the tournament and it highlighted all of his best attributes.

Florentino Perez is acutely aware of the profile of signing that Real Madrid supporters enjoy, this is why World Cups are often such a good opportunity for individuals to impress.

James Rodriguez arrived in the Spanish capital after starring in the 2014 tournament with Colombia, it is possible the former Ajax midfielder could do the very same thing.

Whilst the aforementioned alternate areas of focus are important for the Spanish club, it has been noted how Zidane hasn't really been able to rotate Toni Kroos and the Croatian international this term, at least not successfully.

Dani Ceballos hasn't performed as well as expected, whilst there is a notable drop in quality when Mateo Kovacic is thrust into the starting line-up, yet rarely lets Los Blancos down.

Eriksen is very much the complete midfielder, in the Mold of Modric, although not as effective in a deeper position.

It seems staggering at this point that no team has really tested Tottenham Hotspur's resolve over the playmaker, although this likely stems from the player's reported happiness in North London.

He wasn't looking to force an exit, but would be open to options that would allow him to further his career, something that Real Madrid would clearly represent.

A move from Spurs to the Spanish capital took the former Dinamo Zagreb midfielder from an excellent footballer to a truly great footballer, this is something Eriksen simply has to take note of.

Any transfer would be basically impossible this summer, especially given Daniel Levy's reputation for being a difficult negotiator.

Mauricio Pochettino has asked for much of the club's market work to be completed early this summer, and this may well include a Toby Alderweireld sale.

Should this occurrence, it's difficult to imagine the English club giving another sale the green light, and Los Blancos remembers vividly just how difficult it was to sign both Gareth Bale and Modric himself, however it's clear that the former Ajax star is considered as an option to improve the midfield.

Chelsea want Napoli's deposed coach Sarri as their new manager and have already agreed a provisional two-year deal worth £ 5.5million a season with the 59-year-old.

There will also be the option to extend the terms to a third year.

But even though Sarri has already been replaced as manager at Napoli by former Chelsea boss Carlo Ancelotti, the Italian club are holding out for £ 7m they are entitled to as compensation for him under the terms of his contract, which has two years left.

Chelsea are still in talks with Napoli over that clause, but De Laurentiis insisted last night: “I don't give anyone discounts and no-one has called me about the clause in Sarri's contract.

"This was a clause put in his contract when it was renewed and his salary increased - so now it is going to be paid.

“I have to defend our fans. The clause defends my choices.

“When I modify a contract, it is with agreement. I inserted the clause, and it has to be honoured. Now the clause is not valid? I don't like this one-sided idea. "

The deadline on the clause though runs out on Thursday, after which exercises will be open.

However, seeing as Sarri only earns £ 1.2ma year at Napoli Chelsea will be hoping to do a deal.

De Laurentiis, though, is intent on playing hard ball and could theoretically demand any price.

Chelsea, meanwhile, have not yet agreed terms with outgoing manager Antonio Conte, who will cost them £ 9m to dismiss, with one year of his deal left.

MANCHESTER UNITED transfer news is hotting up - and Jose Mourinho is closing in on Shakhtar Donetsk midfielder Fred.

The Brazil international has been tipped to head to Old Trafford this summer.

United have been battling with Manchester City for the midfielder, 25.

And according to the Manchester Evening News, the Red Devils are finalizing a deal for Fred.

The midfielder is currently in England for Brazil's friendly against Croatia at Anfield on Sunday.

MEN add that United could even sort Fred's unveiling away from their Carrington training ground to get the deal over the line.

The move isn't finished yet but the Red Devils don't foresee any complications over the deal.

MEN say United are hopeful of signing the Brazilian star for a fee lower than his £ 52.5m (€ 60m) release clause.

Fred has been vocal on his future in recent weeks, with the Shakhtar star revealing both United and City want him.

"If I am not mistaken, there was news on Thursday of a strong bid by United.

"It's an honor to be on the radar of great European coaches.

"I have a versatility on the pitch and I'm a multi-skilled player able to play in both midfield positions. I believe some coaches need that with their teams.

"I am focused solely on the World Cup. My agents are taking care of this."