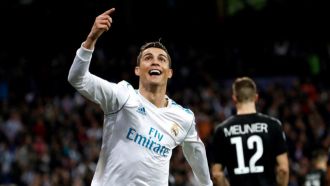 Cristiano Ronaldo: This is the Champions League and Real have the experience

Comethiano Ronaldo showed why he is that man for Real Madrid, paying tribute to his side's experience after beating Paris Saint-Germain 3-1.

Wednesday night's last-16 first leg started badly for Los Blancos but a brace from the winger, his 100th and 101st in the competition for Real, gave them a crucial advantage ahead of the return.

"This was an important victory," Ronaldo said. "We started the match well, but we let in a goal.

"But this is the Champions League and Madrid have the experience.

"Games last 90 minutes and, at home, we wanted to play a good game. We have a good advantage for the return thanks to those two late goals.

"We knew [PSG] were a very dangerous team with the forwards they have. We knew we had to press them to win the ball.

"In the second half we waited a little bit, we played better, and we had more opportunities."

Many have pointed out how the Estadio Santiago Bernabeu crowd was on top form throughout the 90 minutes and Ronaldo emphasized how he wants this level of support to be present at every Real home game.

"The fans have helped us a lot and we felt their warmth," he continued. "It has to be that way.

"Marcelo's goal was very important, he played a good match and he kept it.

"When goals are scored and your team wins, it's always special. Today it started and I scored two.

"The tie is not over yet. We have to go to Paris to win and to score goals, to be calm and to qualify for the next phase."

Zidane: There are still 90 minutes left and Real Madrid will have to suffer them

Taking a 3-1 scoreline to Parc des Princes on March 6 may have been the result of a great Real Madrid performance in Zinedine Zidane's eyes, but the coach believes Paris Saint-Germain will come back at his side in the French capital.

"This isn't over," he assured the assembled media. "There are 90 minutes left.

"We are happy because we played a great match with personality and with our fans, who have always been behind the team.

"We have to be happy today but in three weeks we will play another match. We know that we are going to suffer."

A surprise call was made by Zidane in naming his starting XI as Isco was preferred to Gareth Bale in a decision the Frenchman put down to tactical foresight.

"It was tough but we made a great match from start to finish," he added.

"I am happy. This was a victory for everyone.

"We played four in the middle against three of [PSG's]. Isco had a great game. He helped us in possession. That was the plan."

Opposite number Unai Emery cursed his luck with the match officials on Wednesday night but Zidane didn't be drawn into discussing Gianluca Rocchi's impact on the game.

"We have to be happy with what we did, against a very good opponent that can put us in trouble. We earned a good win today. We know that the return game will be very tough.

"We saw them win 3-0 last year. When you play away from home, anything can happen.

"But today we have to be happy. I am proud of everyone. The fans were key today. At 0-1, they always were. It was important."

The pressure had been mounting on Zidane throughout a poor campaign so far in Madrid, and yet he was certain that he could work without paying any attention to such speculation.

"I will continue working, for games like tonight," he said. "Maybe we can feel a bit of euphoria - we have to be happy with the work we have achieved.

"The return leg is missing, we will have to play well in a huge match, with great intensity.

"But we'll see. Many things will happen before that game."

A busy fixture period in LaLiga now greets Los Merengues before the trip to PSG, starting with Real Betis away from home on Sunday night.

Neymar: Nothing is decided with the second leg still to be played

After a poor showing by his standards, Neymar spoke briefly to the press on Wednesday night to outline how Paris Saint-Germain have not given up on their Champions League tie with Real Madrid.

Cristiano Ronaldo stole the headlines in a 3-1 win at the Estadio Santiago Bernabeu, although Neymar insisted that the return to Paris leaves the tie open.

"Nothing is decided, the second leg is still to be played," the Brazilian told speakers.

Neymar also rebuffed any suggestion that he is unhappy at PSG, amid rumors that Los Blancos are ready to sign him in the summer.

"I have a contract with PSG," he said.

"Right now I am focused on PSG, I am happy here."

Alves: Real Madrid will have to play very well in Paris to qualify

The Estadio Santiago Bernabeu witnessed a magnificent night for Real Madrid in the Champions League on Wednesday and Dani Alves is certain that Los Blancos will have to play even better in the second leg to reach the quarter-finals.

While acknowledging Paris Saint-Germain's consequences in the last-16 match-up, Alves remained cautiously optimistic that his team could come back from 3-1 down.

"We competed well, but we were too intermittent and at the Bernabeu that is very expensive," the Brazilian admitted to speakers.

"In this stadium, you can't rest on your laurels because, if you do, look at what happens.

"Now, if Real Madrid want to go through to the next round, they will have to play very well in Paris.

"The press is going to sell things. Talking about being favorites against Real Madrid at home is a bit difficult."

PSG must wait until March 6 for another go at Real, with domestic games against Strasbourg, Troyes and a double-header with Marseille on their agenda beforehand.

E-mail : [Email protected]
Previous: Gift is Cavani's change today, Liverpool is in the air | Next : Without problems
Views: 7627
- 16756 previous day