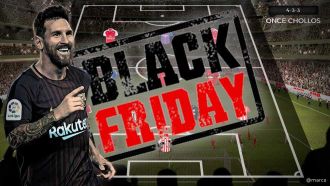 A Super XI made up of players at zero cost

For 'Black Friday,' Lionel Messi is available at zero cost; incredible but true.

Barcelona suggest that the player has signed a renewal with them, but the reality is that Messi's contract ends in June 2018.

That is to say: from January 1 he's free to negotiate with any club.

However, all that glitters is not gold.

Whoever wants Messi must offer, surely, the biggest contract ever known in football.

A figure close to the 30 million euros charged by Neymar with Paris Saint-Germain.

It's not every day there is an opportunity to sign one of the best players in history.

If the Argentinian has not formally signed the deal, the fight to procure him will be brutal.

There are 38 days left until New Year's Eve and we'll see if, on that night, something more than the entrance of a new year is celebrated.

It's not just Messi that's available, as so many stars about to be free to negotiate.

Whoever proposes to make a 'super team' without paying even a single euro could do it.

In goal we find two legends like Gigi Buffon and Ikea Casillas sharing contract termination with Kepa, a goalkeeper of the future.

Someone for all tastes and (almost) all pockets.

The defensive quartet could compete in any team.

Veterans Chiellini and Miranda would be in defense with Dutchman Daley Blind on the left and Juanfran Torres on the right.

In midfield, the jewel is the German, Leon Goretzka, whom Barcelona are taking a keen interest in.

The player seems to have decided not to renew for Schalke 04.

Ander Herrera, with a market value of 30 million euros, would accompany him, and Emre Can would complete a quality qualityeld.

The best of this hypothetical team comes in the attack.

Three world superstars that would be starters in any team in the world.

The talented German, Mesut Ozil, is the first component of this trio that would scare any opponent.

His teammate at Arsenal, Alexis Sanchez, would be in charge of competing to score the goals with the jewel in the crown: Messi.

Cantona: PSG are a small team but they have a lot of money

He had already taken Neymar to task before now, berating the Brazilian for swapping Barcelona for Paris.

"PSG, a small team (laughs) ... but they have a lot of money, so it's a great club," he said ironically to the FullTimeDEVILS channel on YouTube, comments that were also picked up by the French newspaper, L ' Equipe.

Cantona was asked which player he would like to see at United, where he is considered a legend among his followers.

"Pastore, I love Pastore," he continued.

"He's at PSG but he doesn't play; in fact they have two great players, Pastore and Ben Arfa, but neither play.

"Pastore is very special, and with every touch of the ball he surprises you, something that I hadn't seen before."

"Mourinho is going to win a lot with United, but I prefer a more creative game," he said.

"Which is why I loved playing for United.

"I love Mourinho, but I prefer a more offensive game. Because it's United.

"It's like Barcelona, ​​because if they played defensively, nobody would understand.

"At United, that philosophy is very strong and now it's a bit hard to understand."

Xabi Alonso: Barcelona can lose points in Valencia and at the Bernabeu

Atletico Madrid player, Koke, and Xabi Alonso were at a sponsor event on Thursday, and the latter told the crowd that he felt Barcelona were likely to lose points in Valencia and at the Estadio Santiago Bernabeu.

With his former side, Real Madrid, already 10 points behind the Catalans, it seems a tall order, but Alonso was pleased.

"There is a lot of the league left," he said.

"And in a short time everything can change.

"You have to keep trusting Real Madrid because they are a very good team and Barcelona can lose points against them and Valencia."

The former midfielder also defended Cristiano Ronaldo and said he sees Real as favorites in the Champions League again.

"Cristiano Ronaldo will be decisive in the big moments," he continued.

"I see him as always; with desire and enthusiasm to continue scoring goals and winning titles.

"Real Madrid were always the favorites because they've won the last two.

"Liverpool and Bayern are also there in the next round and I hope they do well."

Neymar: Your questions about Real Madrid are so tiresome

He may have played for Barcelona for four seasons, but Neymar has now been linked with a move from Paris Saint-Germain to Real Madrid for several weeks, although he won't be discussing the issue any time soon.

Asked about the possibility of a future transfer to the Estadio Santiago Bernabeu on Wednesday night, the Brazilian simply walked away.

"You're so tiresome when it comes to this subject [of Real Madrid]," he sighed as he departed.

As previously reported on MARCA, Los Blancos are considering a major bid for a star player in next summer's transfer marked.

Can PSG ever be stopped?

Head coach Unai Emery saw his Paris Saint-Germain side demolish Celtic 7-1 in their Champions League Group B match, a game which saw them go 18 games unbeaten and leading to the question whether there is a team capable of beating them.

The win means they have now surpassed the record for the number of Champions League goals scored in the group stages (24) and leaves them top of Group B, three points ahead of second-placed Bayern Munich.

Goals from Neymar, Edison Cavani, Kylian Mbappe, Dani Alves and Marco Verrati ensured the hosts got the points in a game that Emery believes pulled just the negative one.

"We played a complete game, the only negative point is the goal that we conceded, but we played some good football," he said.

"We were ambitious and that is what we have to do, we need to continue to grow more and more."

Borussia Dortmund had previously held the record for the number of goals in the group stage with 21, but Parisien's have beaten it with a game to spare.

They have won five on the bounce in Europe, an achievement only Pep Guardiola's Manchester City can match, and are unbeaten in 13 Ligue 1 games.

Their success is built upon the destructive partnership of their front three who have 41 goals between them.

Cavani is leading the scoring charts with 21 whilst Neymar has 10 in 14 appearances.

"They're two great players," Neymar said of his striker partners.

"We're getting to know each other.

"Cavani is an excellent footballer and Kylian (Mbappe) is tough."

The trio have provided 31 of PSG's 41 points and if anyone is to stop one of Europe's most damaging attacks, they are going to have to somehow keep not just one, but all three of them under lock and key.

As the knockout stages of the Champions League begin to loom, only then will we see if there is a team capable of going all the way.