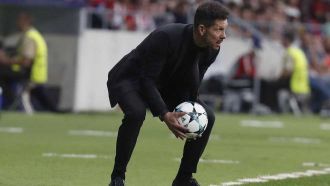 Simeone: Chelsea were better than us

It was a Champions League evening to forget for Diego Simeone and Atletico Madrid as they surrendered a lead in a losing effort against Chelsea, and the Argentine coach has admitted that the English side was better on the night and was always more comfortable than his team.

Antoine Griezmann's converted penalty put Los Rojiblancos ahead just before half-time, yet it was a goal that came against the run of play with visitors in the ascendency for much of the match to that point.

Alvaro Morata's movement bamboozled the Atleti defensive line and his powerful header could have broken the deadlock earlier, had it not been for a fine Jan Oblak save.

"Chelsea were better than us, they always seemed more comfortable," Simeone explained.

Eden Hazard stepped up his recovery from a broken ankle and performed exceptionally well, his work causing Juanfran significant problems on the left side.

When pressed on the performances of both the Belgian winger and Morata, the former River Plate coach simply complimented the Blues on their collective performance.

"Chelsea played a very good, complete match, they were competitive and strong and deserved their victory," he continued.

Following the 0-0 draw with Roma in the opening group match, Los Colchoneros head into their third match of the competition still searching for their first victory, a search which Simeone is confident won't last long.

"It is important to keep going, we will improve in every area and I am sure the victory will come," he said.

Physicality was one of the big differences between the two teams on Wednesday, the Blues were far superior in their strength and it quickly became evident just why Simeone had been so desperate to add Diego Costa to his squad.

Morata: I am happy with the victory and it has nothing to do with my past

The former Real Madrid striker, Alvaro Morata, who became the most expensive player in Chelsea's history this summer, marked his first return to Madrid since leaving with a goal as the Blues came from behind to win 2-1, ensuring that they currently sit atop their Champions League group, and although he enjoyed the win, it wasn't because of who his former employers were.

Morata believes that his side have secured a vital victory in their hopes of topping Group C.

"We secured a very important victory in what was a great test," Morata said in his post-match interview.

"We faced Atletico, a team that has reached the Champions League final in the past few years.

"We've scored the three points and we can now go home, rest and focus on the Premier League."

He came into the game after scoring a hat-trick in Chelsea's 4-0 away win at Stoke at the weekend, yet he states that his pleasure at scoring at the Estadio Wanda Metropolitano has nothing to do with his Los Blancos connection.

"It's always nice and special to score at a new stadium," he said.

"I am happy with the victory; it has nothing to do with my past."

The Spaniard has impressed a lot of people in England due to the speed in which he has adapted to the style of play.

"I am very happy to have started the season so well," Morata said.

"But I insist that the main thing today was to win the game and secure all three points."

Morata also wanted to give praise to his teammate Eden Hazard, with the Belgian having a terrific game for Antonio Conte's side.

"It's always easy to play next to someone like Eden," he said.

"He is one of the best players in the world, I am lucky to play with him.

Griezmann: I didn't play well and it wasn't a good day for me

Atletico Madrid forward Antoine Griezmann opened the scoring in their debut Champions League fixture at the Wanda Metropolitano, but Chelsea came back to win the game 2-1, scoring the winner in the 94th minute.

Despite the goal, the elusive forward did not have one of his better games and he criticized himself for his performance in his post-match interview.

"It was a difficult game," Griezmann said.

"Ultimately it isn't going to be, but we have a lot of games left and we need to win them all.

"We missed a better performance than me. Apart from the goal, I didn't play well; it wasn't a good day for me.

"We must keep working."

The 26-year-old was heavily linked with a move to Manchester United in the summer, meaning that he would have faced Chelsea on a more regular occurrence, and the Frenchman was full of praise for the London club.

"In the first half they were better than us and we responded well in the second," he said.

“We tried until the end, but it wasn’t going to be.

"They were better on the day and we recognized that."

Meanwhile, as Atletico dropped points, Roma beat Qarabag 2-1 away from home to move into second place in Group C.

"We have to win all of our remaining matches and then we'll see [if Atletico can qualify for the next stage of the competition]," he concluded.

Barcelona's burgeoning Champions League campaign continued with a victory away at Sporting, yet there was one negative point with Luis Suarez reacting angrily to being substituted, although Ernesto Valverde has since explained the reason for the change.

Sebastian Coates' own-goal handed the visitors the victory but it was far from a vintage performance from the Blaugrana.

"It was silly, the match was too close, there was no other reason for the change," Valverde explained in his post match press conference.

It was a far more challenging fixture for Los Cules than many were expecting, the Portuguese club making things exceedingly difficult with their own style.

Valverde pointed towards the strong atmosphere at the Estadio Jose Alvalade as one of the reasons why his team faced such a tough evening.

"We knew that to win here today we would have to suffer, the atmosphere was strong, we were determined throughout the match and we dominated the first half," he continued.

"Sporting then had 10-15 minutes of control, the Champions League is like this."

The 1-0 victory continued the Catalan giants' winning streak in the 2017/18 season yet the Spaniard refused to be drawn on the achievement, merely turning his focus to the next match.

"It's true that we are in a good moment but we can't afford to look back, we have another important match on Sunday," he said.

Many wondered just how Barcelona's style of play would change once the 53-year-old replaced Luis Enrique and when pressed on such a matter the coach suggested that there hasn't been too significant a departure from what had gone before.

"With the exception of Messi's position when he comes inside, I think the rest is significantly similar," he noted.

Real Madrid will return to training on Thursday, where they will learn more about the status of Gareth Bale after his injury scare at Signal Iduna Park.

The club were initially very worried (Bale sat down on the field before being substituted), but it was later revealed that he was only suffering from a cramp in his left hamstring.

However, the suffering will not be alleviated until they are able to see the Welshman on the practice field.

Wednesday saw no medical testing performed, as Bale was given the day to rest after a stellar performance against Dortmund.

With a goal and an assist, he helped Real lead to their first victory in seven at Dortmund.

With his play just beginning to take flight again, he and the club will be hoping that this cramp is nothing to worry about.