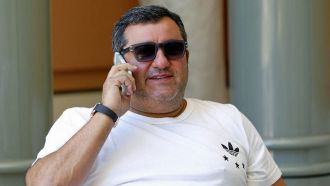 Raiola: Messi must leave to prove how great he is

Lionel Messi has been advised to leave Barcelona and try a new experience in order to demonstrate his quality by polarising agent Mino Raiola.

The Italian does not represent the Argentinian, whose Blaugrana contract runs out at the end of the season and who has yet to pen a renewal.

That didn’t stop Raiola offering the striker some advice however.

"A player like Messi must try another experience with a different club and prove how great he is," said the Italian following a meeting with the Paris Saint-Germain hierarchy.

"Barcelona must be reinvented again."

Raiola also gave his take on the ever increasing madness of the transfer market and believes that the Neymar transfer has set a dangerous precedent.

"The market, as such, no longer exists. Now it is countries that are signing players and that isn't football," he continued.

"But transfers of 200 million euros are going to be normal from now on, it won't be crazy to see that."

Dembele is Barcelona's most expensive buy

He has the privilege of being the first Barcelona player to cost over 100 million euros, and Ousmane Dembele has therefore become their most expensive signing in history.

At only 20 years of age, the youngster is going to be a big star.

He also becomes the second most expensive signing in the history of football after the 222m paid by PSG to sign Neymar.

With factored variables, the player could end up costing 150m euros (105m fixed plus 45m in variables).

A year ago, Dortmund paid just 15 million to Rennes for Dembele and so have multiplied its value by ten this summer.

1. Dembele (150 million) from Dortmund. He will sign for five seasons and will become the most expensive signing in Blaugrana history.

2. Neymar (97 million) from Santos. He signed for Barca for 57 million according to the club but his price kept growing and growing until it halted at just under 100m euros.

3. Luis Suarez (81 million) from Liverpool. A dream fulfilled for the Uruguayan striker, who came to form MSN.

4. Ibrahimovic (69 million) from Inter. He was a star signing but his stay was limited to a year because of his differences with Guardiola.

5. Villa (40 million) from Valencia. The Asturian is the most expensive signing of a Spanish footballer for Barcelona. Paulinho also cost the same price.

On Friday at noon, the signing of Ousmane Dembele by Barcelona will be a reality.

The Catalan club met with their German counterparts on Thursday in Monaco, where the draw for the Champions League was held, and a deal was closed for 105 million euros plus 45m in variables.

A five-year deal will be signed and the player's family have already been celebrating the move on social networks.

Real Madrid, meanwhile, has been informed at all times what happened, given the excellent relations between Borussia and Real Madrid.

The player will fly to Barcelona to put pen to paper at the appropriate time.

Ronaldo helped Real to a second consecutive Champions League title and finished as the tournament's top scorer with 12 goals last season. He has now won the award three times, one more than Messi.

The three-player shortlist was selected by a panel of 80 coaches of clubs that participated in the group stages of the 2016/17 Champions League and Europa League and 55 journalists selected by the European Sports Media (ESM) group, representing each of UEFA's member associations.

Zlatan Ibrahimovic, whose return to the Premier League club was confirmed on Thursday, says he's "back to finish what I started" at Old Trafford.

Zlatan Ibrahimovic has rejoined Manchester United on a one-year contract after the Swedish star's spell with the Premier League side was curtailed by a serious knee injury last season.

Ibrahimovic missed the final weeks of United's campaign after suffering ligament damage in a Europa League clash against Anderlecht in April.

But United manager José Mourinho remained in contact with the 35-year-old while underwent his rehabilitation and the former Barcelona and Paris Saint-Germain forward has now agreed to return to Old Trafford.

"I am back to finish what I started. It was always mine and the club's intention for me to stay, "Ibrahimovic told United's website.

"I can’t wait to get back out on that Old Trafford pitch, but I also know that I have to take my time to make sure that I am ready.

"I have been working hard and will continue to do so to make sure I am in the best possible condition for my return to the pitch. "

The Real Madrid striker has been left out of France squad again. It is an ongoing punishment for the player's alleged involvement in the Valbuena Case.

Karim Benzema has been left out of the French squad for the upcoming 2018 World Cup qualifiers against Holland and Luxembourg. The Real Madrid player has not been called up for international duty since the problematic Valbuena case at the end of 2015. Also missing from the list is Ousmane Dembélé who has been isolated by Borussia Dortmund for failing to turn up for training.

France host Holland at Stade de France in their seventh qualifier on 31 August - a key match for Didier Deschamps' team who sit second in Group A, level on points with leaders Sweden and just three points ahead of the Orange. Three days later France are back in action in Toulouse against Luxembourg.

Today, The Team published comments from several former France internationals, some of whom feel that Benzema should be recalled. When asked about the Madrid striker, Deschamps told reporters: "You all know my stance on Benzema, I have made it clear and it hasn't changed."

Cristiano Ronaldo was the victim of a violent punishment after receiving a recent five-game ban, so says Portugal coach Fernando Santos.

The Real Madrid man was red-carded for alleged simulation and a subsequent altercation with the referee in the Supercopa de Espana first leg against Barcelona.

Santos, who submitted his 24-man squad for Portugal's upcoming World Cup qualifiers, promised Ronaldo and does not think that is fair.

"Cristiano never worries me and I've never had a problem with him. He will always give his answer on the field and everyone knows how good both his ability and mentality is."

Portugal will face the Faroe Islands on August 31 before taking over Hungary on September 3.