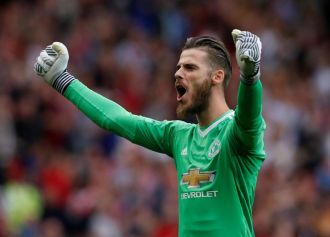 The Spanish and European champions' interest in De Gea has been reignited after coach Zinedine Zidane decided that his team does not need another outfield Galactico after failing to land Kylian Mbappe from Monaco.

The progress of attacking midfielder Marco Asensio, 21, has pleased Zidane to abandon plans to recruit another striker.

Instead, Real are looking at sealing their long term pursuit of the Spain international keeper with a bid of around £ 46million.

De Gea nearly signed for Real in 2015 before an administration error meant his paperwork missed the transfer deadline.

The Red Devils are also still keen on bringing in Inter Milan ace Ivan Perisic - as the transfer saga has continued to drag on this summer.

Despite their thrashing of the Hammers, Jose Mourinho is still determined to strengthen his side and is battling with Manchester City to sign Emmanuel Bonaventure Dennis.

Diego Costa latest: Chelsea could be forced into taking a £ 20m hit with Atletico only willing to pay £ 30m for the striker

Antonio Conte's men value the Spaniard at £ 50m but his old club Atletico Madrid are only willing to cough up £ 30m.

Maverick Costa still has a house in Madrid and is due to fly out there next week as he tries to force through a return.

The Spain international, 28, is currently AWOL at his family home in Brazil.

He said: “My destination is already set. I must return to Atletico Madrid next season. It turns out there is the impasse that Chelsea does not want to release me.

"But I believe this situation will be resolved on my return to Spain."

Costa is also threatening to involve lawyers after being slapped with fines by the Blues for failing to turn up for work.

Chelsea can fine their fiery rebel £ 300,000 every fortnight for each unauthorised absence.

EDEN HAZARD could be included on the bench in Sunday's crunch London derby against Tottenham.

And Tiemoue Bakayoko is also set to ease Antonio Conte's selection woes with a possible debut against Spurs.

Both players returned from injury to play in a secret match against a QPR Under-20s side at Cobham yesterday - with Hazard scoring.

While Bakayoko - a £ 30million signing from Monaco - returned from a knee injury to feature in Chelsea's behind-closed-doors game against QPR.

It was the first time Hazard, 26, had played since breaking his foot while on duty for Belgium in June.

Hazard featured for 45 minutes as part of a strong Chelsea outfit - led by Conte - in the 8-0 rout of the Rangers.

Now powerhouse ace Bakayoko, 23, could also figure in Sunday's Premier League clash at Wembley as the champions bid to bounce back from a shock 3-2 opening day defeat at home to Burnley.

ARSENAL could make a bid for Julian Draxler after Paris Saint-Germain told the winger he is free to leave.

The German international has been pushed further down the pecking order following the £ 198million arrival of Neymar from Barcelona.

And The Times reports that the Gunners could make another move for the 23-year-old having been knocked back several times in the past.

He could be available for around £ 32m.

The German World Cup winner arrived in the French capital in January for £ 35.5m from Wolfsburg.

But already he is said to have fallen out of favor with boss Unai Emery - and that could alert Premier League giants Arsenal and Liverpool.

Both are known to have an interest in the former Wolfsburg star, who at just 23 still represents an attractive purchase.

Red Devils boss Jose Mourinho is desperate to add a wide man to his side, and is still keen on bringing the 28-year-old to Old Trafford.

The Serie A side have already issued a hands off warning to clubs interested in the Croatian international's services.

And Inter boss Luciano Spalletti recently revealed that the former Borussia Dortmund ace is "determined to stay" at the San Siro.

It was believed that the Portuguese man had given up on his quest to lure away the winger to the Theater of Dreams.

However, according to the Daily Mail, the Europa League winners are still interested in Perisic, as they seek more pace on the flanks.

They report that the ex-Chelsea manager is concerned that his men do not shift the ball quickly enough when on the attack.

United have already had a £ 35million bid rejected by the Italian side earlier on in the window, as they hold out for an offer of £ 50m.

Inter are keen to tie Perisic down to a new deal as they look to put an end to speculation surrounding his future.

Barcelona emerged as a shock destination last week, but they look set to complete deals for Philippe Coutinho and Ousmane Dembele instead.

While Chelsea are also keeping tabs on the ex-Wolfsburg fan favorites after they suffered a 3-2 loss at the hands of Burnley last Saturday.

If a move for Perisic fails to materialize, United will join Arsenal in the race to nab Monaco youngster Thomas Lemar.

SunSport reported earlier today that the EFL Cup champions are weighing up a potential £ 55m offer for the 21-year-old.

Mourinho's side face Swansea at the Liberty Stadium on the weekend.

The game starts again with a French "classic"!

Η French Ligue 1 continues with a big derby, lime hatred, between her PSG and Marseille.

Paris started with a defeat in Lens, a result that is due to its many and important absences while Marseille passed victoriously from Brest in the premiere, scoring three goals (3-2). The German Thomas Tuchel will face the Portuguese Andre Villas-Boas in the interesting duel of the two benches that attracts the eyes of the French football fans!

The tradition at Ligue 1 level mentions 81 matches between the two teams. The victories of the two opponents are shared, with 31 each while there are also 19 draws. In total, they have faced 97 times, with 43 victories of the Parisians, 32 of the Marseilles while 22 draws have been recorded.

The French "classic" Paris Saint-Germain - Marseille plays with 0% rake * and Bet Builder ** in the updated Pamestoixima.gr!