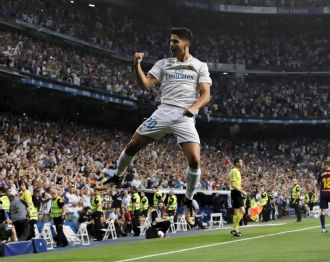 Marco Asensio's stunning opener for Real Madrid ensured that the club's astonishing scoring run continued, making it 68 games in a row in which they have found the net, closing in on the record of 74.

The current record was set by Santos, during footballing legend Pele's time at the Brazilian side, during which they picked up 51 victories, 14 draws and just nine defeats.

In six fewer matches, Real have already matched Santos' tally of wins during their record-breaking streak, with 12 draws and five defeats making up the 68.

The main difference between the two records is that while Madrid have scored an impressive 186 goals, the side led by Pele notched up an astonishing 245.

Real Madrid broke the European record last season when they reached 62 consecutive matches, but now have their sights set on the world record as well.

Asensio: My goal at the Camp Nou was more difficult

After completing the scoring in the first leg at the Camp Nou with an excellent goal, Marco Asensio opened the scoring at the Estadio Santiago Bernabeu with another incredible effort but he says the first of the two was the most difficult to execute.

Barcelona were a goal down before they ever got going in the second leg, as a result of Asensio's audacious 30-yard shot that dipped and deceived Marc-Andre Ter Stegen before flying into the top corner.

"Both of the goals were important in the tie," the Spaniard said.

"The first goal was nice, as was tonight's but the one at Camp Nou was more complicated and was very important."

With Cristiano Ronaldo's suspension, Asensio will likely see an increase in playing time, which he intends to take full advantage of.

"I work hard to have as many minutes as I possibly can," he added.

"I want to play from the beginning like I did today but I am happy with how things are going."

By clinching the Supercopa de Espana in a 5-1 aggregate win over Barcelona, ​​Zinedine Zidane took his tally of trophies as Real Madrid coach to seven, with two Champions Leagues, two UEFA Super Cups, one Club World Cup and one LaLiga title already under his belt.

Not even two years into his coaching career, Zidane will surely continue to add more trophies to his collection and with four more on offer this season he could be closing in on the position of Real Madrid's most successful coach of all time.

The next chance at silverware will come in December as Real Madrid competes in the Club World Cup, where Zidane will be looking to climb to second in the table of the club's most decorated coaches.

Asensio, the best of the super champions

He opened the scoring in the fourth minute with a goal from outside the area.

Benzema's goal was another of the highlights.

Vote below for the best performing Real Madrid players.

Luis Suarez finishes the Clasico with a knee injury

It was a night to forget for Barcelona with the team outclassed on the pitch by Real Madrid and things are going to get worse before they get better with Luis Suarez finishing the Clasico with a clear injury to his right knee.

The Uruguayan appeared to pull up just five minutes from the end of the contest and with Los Cules having used all three substitutions; he had no option but to remain on the pitch.

Whilst it is far too early for any medical assessment there are significant concerns over how limited the former Liverpool forward's movement was after the initial incident.

Further tests will take place on Thursday and it remains to be seen whether or not Ernesto Valverde will have him available for the LaLiga opener against Real Betis.

A trip to the Estadio Santiago Bernabeu ended in a 2-0 defeat with Barcelona's left-back Jordi Alba making clear that the team suffered throughout the evening.

Real Madrid took full advantage of a Barcelona team in disarray with Ernesto Valverde's charges failing to settle to a three at the back system.

Speaking in his post-match interview, Alba admitted that Los Blancos were much the better team and it made for an uncomfortable night for his side.

"It is true that we have suffered tonight but it is a long season and we have things to work on, we are sure to improve and have a good year," he explained.

What was abundantly clear in the first half was how easily the hosts kept possession and put their opponents under pressure, the famed Barcelona pressing game not in existence.

"We struggled to get the ball, they were very intense in their pressure, we improved in the second half but I think Madrid have been better over both matches."

Concerns surrounding the strength of Barcelona's squad remain and with just over a fortnight left in the transfer window it is clear reinforcements are needed before September.

Despite this the 28-year-old intimated that Barcelona are very strong in a number of areas and that they are responding well to the new coach's methods.

"I think the coach's approach has been very good, the result is a shame but we are going to turn our focus to the weekend and winning that game."

Arsenal risk losing striker Alexis Sanchez for free next season, according to manager Arsene Wenger, who confirmed the club have made no progress on a new contract for the Chilean striker.

Sanchez, 28, is currently in the final year of his contract. He has been linked with a move to Paris St Germain in the current transfer window.

"We have not progressed on that front," Wenger said in a news conference before Arsenal head to Stoke City on Saturday.

"At the moment, he is a player who goes into the final year of his contract and prepares for the season. We have not made any progress on the other front.

"It's not an ideal situation on the financial side and it requires some sacrifice ... but it doesn't mean the players who are in the final year of their contract will not extend their contract. We will work on that as well."

Wenger said Sanchez is still recovering from an abdominal strain but is expected to regain full fitness before the club's match in Liverpool on Aug. 27.

"For Sanchez, it (Stoke) looks a little early, but he works hard in training," Wenger added. "He should be available for the next game against Liverpool.

"His recovery is going very well, he is working very hard. But you have to be very cautious. It was a muscle strain and (you have to be wary) not to have any setback on it."

The confirmed executive managers Jack Wilshere and Alex Oxlade-Chamberlain, who are also in the final year of their contracts, are firmly in his plans for the current season.

Wilshere returned to action from a broken leg during Arsenal Under-23's 3-2 win over Derby County earlier this week.

"It's good that he is back and available," Wenger said. "I think he needs games now. He might play again on Monday night. He is not far away now."

Arsenal started their campaign with a 4-3 home victory over Leicester City last weekend.

Villarreal have officially announced the signing of Carlos Bacca, having brought the player on loan from AC Milan.

He arrives to restock the striking department following Roberto Soldado's departure for Fenerbahce.

oining for an initial fee of 2.5 million euros, there is a non-negotiable purchase clause which must be activated at the end of his loan contract, for which the Italian club will receive a further 15.5m euros.