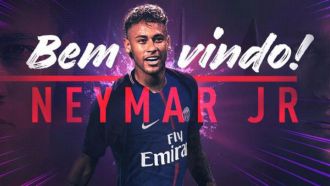 Hundreds of Paris fans went outside the hotel where Neymar ended up and celebrated the transfer of the Brazilian star.

Neymar arrived in Paris late last night and will be presented by Paris today after his transfer from Barcelona, ​​which cost 222 million euros.

The Brazilian star, who will sign for five years, ended up at the Royal Monceau Hotel, which was quickly flooded with hundreds of fans of the French team celebrating the great addition of their team with slogans and smoke.

With a long Instagram post, Neymar says goodbye to Barcelona and leaves for Paris. "I wanted a new challenge," he said, referring to Lionel Messi.

Neymar said goodbye to Barcelona for a new challenge in his career, as he wrote in his farewell message via Instagram. The Brazilian star praised Lionel Messi and referred to the reason he decided to leave for Paris.

His message in detail:

"An athlete's life has challenges. For me, Barcelona was more than a challenge. I was playing with these stars in video games. I came to Catalonia at the age of 21. I remember my first day at the club, sharing the locker rooms with idols like Messi, Valdes, Xavi, Iniesta, Puyol, Pique, Busquets and playing for a club that is more than a club. Barcelona is a nation that represents the whole of Catalonia.

I had the honor of playing alongside the top athlete I've ever seen and I'm sure I won't see better, Lionel Messi, who became my teammate and friend on and off the field. I'm proud to have played with him. I formed with him and Suarez a triplet that went down in history. We conquered everything we could conquer. I lived incredible moments in a city that for me was more than a city, it was a second home. I love Barcelona and Catalonia.

But an athlete wants new challenges. And for the second time in my life, I will follow a different path from what my father told me. Dad, I understand and respect your opinion, but my decision is accepted and I ask for your support, as always. Barcelona and Catalonia will always be in my heart, but I want new challenges.

I accepted Paris' offer to pursue new achievements and help the team win the titles its fans want. They presented me with a plan and I am ready to challenge.

I thank the friends of Barcelona for their love and my teammates for what I learned next to them. I feel like it's time to leave. Paris will be my new home for years to come and I will work hard to justify their trust. I look forward to the support of all of you, fans, friends, teammates, family and all those who have suffered lately and deserve some peace of mind.

It is a difficult decision, but I made it with the maturity of my 25 years.

Barcelona, ​​thank you for everything.
Paris, I'm coming to you.
May God bless and protect us. "

Roma's Juan Cuadrado has been in the eye of the beholder, who is looking for a player to fill the position of extreme midfielder.

Roma are interested in acquiring Juan Cuadrado of Juventus, whose management has given priority to acquiring a right winger.

So, according to "Leggo", the "bianconeri" are positive in selling the Colombian star, setting its value at 30 million euros.

Perhaps the player himself wants to leave, as his participation time after the arrivals of Douglas Costa and Federico Bernandeschi is expected to decrease significantly.

It should be noted that the "Jialorosi" turned their attention to the 29-year-old international after the failed negotiations with Leicester for the concession of Riyad Mahrez.

"Ready for the Super Cup!"

Keilor Navas wanted to express his optimism, in view of the match with Manchester United for the European Super Cup.

Keilor Navas has expressed his belief that Real will be crowned "queen", as it will prevail over Manchester United in the European Super Cup.

The Costa Rican goalkeeper initially stated that the team still has a lot of room for improvement. However, he added that they worked hard during the preparation and that they will definitely make good appearances next season.

Regarding his own performance, he said: "I'm very happy with myself, as I managed to train properly, something I couldn't do last year."

At the same time, when asked about the upcoming transfer of Neymar to Paris Saint-Germain, he said: "The fact that he is a player of exceptional quality, certainly does not fit" doubt. I would not like to comment. I live in the fact that he is a very good footballer ".

Tthe money offered to him was not enough.


Roma sporting director Monchi has made it clear that the club does not depend solely on the presence of Riyad Mahrez.

Monchi clarified that Roma are a quality team and that their appearances do not depend on the contribution of Riyad Mahrez.

The two proposals for the acquisition of the 26-year-old Leicester midfielder were submitted by the leaders of the "Gialorosi", however, the English club decided that the money offered to him was not enough.

Regarding this fact, the sports director of the Romans stated: "Our team has players with excellent technical training, such as Pelegrini, Naiggolan, Dzeko and Kolarov. Therefore, our course will not depend solely on the presence of a right winger».

He went on to say:Whether Mahrez comes or not, the management will buy a quality player who will "take off" our team.».