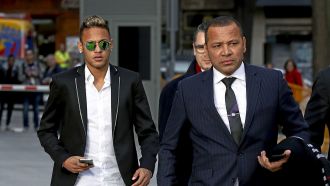 At first it was brushed aside and treated like a nonsense rumor, but now Barcelona are coming to terms with the potential reality of Neymar leaving the club.

From the '200 percent' certainty that the winger won't leave to hopeful reassurances that Paris Saint-Germain's 222 million euro deal would be out of Financial Fair Play limits, the tune around the Camp Nou has certainly changed.

In the dressing room, Neymar's exit has long been considered a real possibility and there are those who believe that the Brazilian has 'always been a bit on his own'.

While relationships with his teammates have certainly been positive, Barcelona squad is one of cliques and Neymar is something of an orphan having seen allies such as Dani Alves leave the club.

Therefore it is in purely footballing terms that the winger's potential departure would be felt the most, with off the field matters perhaps driving the move as much as the enormous wage on offer at PSG.

Barcelona are thinking to be desperately trying to convince Neymar to rebuff any further approaches from Paris Saint-Germain as the deal to take him to the French capital progresses rapidly, according to reports.

After MARCA claimed that the Ligue 1 side are happy to pay the forward's 222 million euro release clause, Neymar is understood to be open to the move in an attempt to escape Lionel Messi's shadow and bulk up his salary.

Now Rac1 have reported on the deal being at a 'very advanced' stage with PSG offering the Brazilian a five-year contract worth 30m euros net per season, making him Europe's best-paid footballer.

Neymar's father may already have an agreement with PSG

It has been the talking point across the world of football in the last few days, and now the gossip surrounding Neymar's move to Paris Saint-Germain is becoming more serious.

Neymar Santos Snr., The father and agent of the Barcelona star, may have already signed an agreement with the Parisian club.

During Radio Catalunya's Club de la Mitjanit show, speakers mentioned that the Brazilian's father could receive a premium 'much higher' than the 40 million euros Barcelona paid him as a commission for the transfer from Santos.

It all started as a long shot and a mere rumor, but this potentially historic transfer could be gathering pace, as the Barcelona-based radio station claim there is a 95 percent chance of deal happening.

Zidane: It's going to be a demanding season

After steering Real Madrid to both Champions League and LaLiga success last season, Zinedine Zidane believes next season will be a tougher campaign for his Galacticos.

With all transactions considered, the club from the capital city have the opportunity to secure six titles this coming campaign.

"We like everything we have for this year ahead," he told Real Madrid TV.

"It's going to be a demanding season and we have to prepare for it."

Los Blancos are training at UCLA's facilities in Los Angeles, and Zidane is content with the start to training his players have made.

"The first week has gone well, we can't complain," he added.

"We are here to work and we are doing very well, pre-season is very important, there are new players and we have to introduce new aspects."

As for the players, the 45-year-old believes that there is a real desire for them to continue to be successful at the Estadio Santiago Bernabeu, whilst acknowledging his own gratitude for the team.

"As I have always said, I appreciate every minute that I am here, I am lucky to be at this great club."

The Spain international traveled to England with his wife, Alice Campello, and his agent, Juanma Lopez, to officially put pen to paper on his new five-year contract.

The Blues have already agreed terms with Los Blancos, and the player's transfer is set to reach 80 million euros plus 5m euros in add-ons.

Having failed to snatch the services of Romelu Lukaku, who instead decided on a Manchester United move, Antonio Conte is to acquire the 24-year-old striker to replace Diego Costa as his squad's main poacher.

Morata bid an emotional farewell to his former teammates and coaching staff after his last training session with Real, while several of his colleagues wished him well in his new adventure through their social media accounts.

After Dani Alves' departure to Paris Saint-Germain, Juventus have announced the acquisition of Mattia De Sciglio to fill the Brazil international's boots.

Earlier this week, the Turin team reached an agreement for the 24-year-old right-back's signature with AC Milan for 12 million euros.

Having already played for six seasons in Serie A, Italy international put pen to paper for a five-year contract until 2022.

West Ham United's striking woes could be at an end after the London club confirmed their agreement with Bayer Leverkusen for the transfer of Javier Hernandez.

Costing 12 million euros and on a 120,000-euro-per-week contract, the Mexican's first Premier League game for his new side promises to be against old club Manchester United at Old Trafford.

That is to come after he flies into England in the coming days to complete a medical and finalize personal terms.

Barely a month has passed since Atletico Madrid announced that Kevin Gameiro will undergo surgery on his groin, yet the Frenchman is already making considerable progress in his return to full training.

Just three weeks after his operation, the striker who had previously been linked with a move away, is now closing in on the possibility of joining his teammates in pre-season.

However, the 30-year-old is still set to miss the start of the campaign following the injury, which has been ongoing for several months.

However, after sufficient rest and successful treatment, the forward is working towards making himself available to Diego Simeone, beginning with some light training with the ball.

Los Rojiblancos will not be able to register new players until January, which means France international could be key to El Cholo leading up to the winter.

Formerly of Sevilla and Paris Saint-Germain, the frontman tallied 16 goals last season and will be keen to impress at the Estadio Wanda Metropolitano.