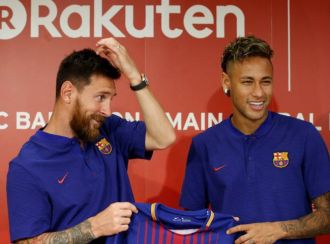 The Brazilian winger's father will travel to Paris this week to discuss a move with Nasser Al-Khelaïfi, taking advantage of Barça's interest in Verratti.

Neymar's father will travel to Paris this week to meet Nasser Al-Khelaïfi, the President of PSG, to discuss a transfer for the Brazilian winger. The French club have already attempted to sign Neymar on at least three occasions.

Barcelona's strong interest in Marco Verratti, PSG's Italian midfielder, has facilitated the contact between Neymar's representatives and Paris Saint Germain. The Brazilian's release clause started at € 200m, is currently € 222m, and will rise further to € 250m next season. As such, Neymar's current price is € 222m, while Verratti would be available for around € 100m. On an economic level, a deal involving Neymar moving to Paris and Verratti to Barcelona would be extremely beneficial for the Blaugrana.

Yet for the player, the move is not entirely motivated by money. Neymar wants to be the cornerstone of a large project, without being in the shadow of his team-mates. He believes that he has learned as much as he can from Lionel Messi, and that now is the time to embark on a parallel bid to become the best player in the world, a difficult task with Messi in the same dressing room.

While on holiday this summer, Neymar was cryptic when asked about his future, replying that "Who knows about the future".

From Barça, however, there remains a belief that Neymar will continue to line up alongside Lionel Messi and Luis Suárez next season. Robert Fernández, the technical secretary at Camp Nou, assured in a press conference that "I don't believe anyone will pay Neymar's release clause."

Milan director doesn't hide Morata interest: "It could heat up"

AC Milan are making no secret of their intention to sign valvaro Morata from Real Madrid. Earlier today, La Gazzetta dello Sport stated that Morata is 'on the verge of signing' for the Rossoneri, a move that would add further gloss to the club's outstanding transfer window.

Mirabelli: Morata situation could 'heat up'

Morata had told us of his availability, but the situation was complicated a little by the Champions League final [Morata stated that he didn't see himself playing for another Italian club after his time at Juventus], and a little by interest from other clubs. It's an operation that could heat up, but on our terms. "

Mirabelli also discussed Andrea Belotti, with the Torino striker another target for Milan.

“We are looking for a forward, Torino know that we are interested in Belotti. We always let the club know before we talk to a player, so they have no reason to be angry. However, we could also be interested in players that have not yet appeared in the newspapers.

Valverde: "Having Messi by my side is a relief"

Barcelona coach Ernesto Valverde held his first press conference after several days of pre-season work with his team. He discussed transfers, working with Lionel Messi, and the young players from Barça B.

First impressions: “I'm very happy with how things are and how things are going. The team are happy, and it's all about increasing the work load and getting in good shape physically. We need to keep polishing things. I'm delighted. "

Reinforcements: “I don't think this is the place to discuss players that aren't ours. We have to be alert to everything, but we have a great squad. I'm happy with the squad I have. "

Valverde relieved to have Messi

Style of play: “We haven't been here long, but there are questions that come decided. We're obliged to have the ball, play attacking football and Barça's trademark style will continue to be seen. "

Messi: “Leo is a unique player and he will have the same role that he had had in the past. He can do everything well… Having Messi by my side is a relief. ”

Deulofeu: “He has a muscular issue and is recovering. He's one of our players and we believe that he can help us during the season. "

Verratti? 'I'll work with what I have'

Verratti: “I don't think about whether we can bring in a player. My idea is to work with what I have here. ”

Young players: “They look good, and excited. They are helping us with the sessions. That jump, form Segunda B to being with us, isn't felt that much. This year is important for them. They will be in the Segunda, a division in which it is tough to win matches. Everyone has the best intentions, but we'll see what happens. "

Jardim is counting on Kylian Mbappé for Monaco future

The Parisian footballer played 60 minutes in the preseason friendly against PSV and his manager is expecting him to stay with the club into the 2017/18 campaign.

Monaco coach Leonardo Jardim spoke to AS following his fight pre-season friendly against PSV, a game that saw Kylian Mbappé in the starting line-up. He made it clear that he is expecting to have the forward in his squad for the coming season in a spite of intense speculation about a world-record transfer.

Counting on Mbappé to stay

With interest coming from Real Madrid, Manchester City and PSG - and previously from Arsenal and Liverpool - Jardin said he was relaxed about the situation:

"He [Mbappé] seems very calm, he is young and has great potential. He has only just joined up with the squad and so he needs to find his rhythm again, but I see him doing well.

"I am counting on Mbappé as I am all of the players I have; I expect to have him here."

It is just two weeks till Monaco face PSG in their first competitive game of the new season, in the French Super Cup. Ligue 1 then begins on 19 August with a game against Toulouse for Jardim and the plan is to have his star man firing on all cylinders for those matches. And he believes the principality is the best place for the young man from Paris to develop.

"Our philsophy is to take and develop young footballers who have talent and create a competitive team."

ina poll conducted by AS, Most Real Madrid fans are losing faith in landing Mbappé while Manchester City, PSG and the rest of Europe's elite remain alert.

A survey conducted by AS revealed how Real Madrid fans feel about the possibility of signing Kylian Mbappé: 62% (15,772) of participants (a total of 25,534) responded in the negative when asked if they believe Kylian Mbappé will sign for los Blancos this summer. Only 38% of fans believe that the French striker will wear white next season.

Mbappé is the name of the summer. Following an excellent year, Mbappé has all of the biggest European clubs on alert including Manchester City, Real Madrid and PSG. Unai Emery has gotten involved in PSG's recommendations for the player and Pep Guardiola is keeping close tabs also while Monaco's owner Dmitri Rybolovlev has offered the 19-year-old a new contract worth € 8 million net per year.

Real Madrid and Zinedine Zidane remains enamored by the player and they have been chasing him since he was a youngster. Perhaps, however, there is no room for Mbappé in the early XI with the front three places occupied by the BBC. The Liga champions offered him € 6 million but PSG are capable of doubling that.