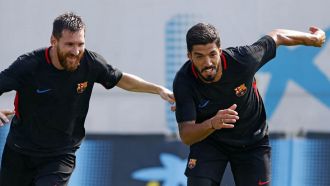 Valverde will have everyone available for the Super Cup

Although transatlantic tours are not the best method to prepare for an upcoming campaign, Ernesto Valverde has all but three of his Barcelona squad already available at this point and, unlike in seasons past, he will have everyone ready for the Super Cup clashes against Real Madrid. .

At present, 29 players are training of which two, Rafinha and Gerard Deulofeu, are injured.

The Brazilian is still recovering from the knee ailment he suffered a few months ago and everything indicates that he will not go on tour, while the Catalan has been exercising on his own to solve pubic problems.

The Catalans are still waiting for Nelson Semedo, Andre Gomes and Marc-Andre ter Stegen, but it can already be concluded that the Txingurri will have his chosen first XI at his disposal as needed.

Morata insists on leaving ... and Milan could be his destination

The new look Milan have set their sights on Alvaro Morata with interest fading from Manchester United who are not ready to meet Real Madrid's financial demands.

Milan with their Chinese owners appear to have money to burn and they are ready to negotiate with Madrid over the 90 million euro asking price.

Morata finished the season with a hat-full of trophies but was adamant about leaving the Madrid side to have more playing time and the failure to reach an agreement with Manchester United was a disappointment for him.

In Italy it has been reported that his former Juventus teammate Bonucci is trying to entice him to Milan and at the moment it appears to be Morata's most likely destination.

What must be going through Morata's mind?

As if the collapse of his dream move to Manchester United not cruel enough on Alvaro Morata, the Spanish striker is currently training with Real Madrid in Los Angeles just 200 meters away from his would-have-been teammates.

Both clubs are touring the Unites States this pre-season and fate seems to be toying with Morata by placing Romelu Lukaku, the man who took the roles which seemed set to be his, just a couple of football pitches away.

It must be hard for the 24-year-old to refocus and it will surely be until the end of the transfer market when his future will eventually be clear and decided.

Although the Old Trafford option has now been ruled out, Antonio Conte wants him for Chelsea and then he reportedly received a phone call from Leonardo Bonucci to join him at AC Milan.

Should Kylian Mbappe sign for Los Blancos then the club would look to offload a striker and Morata would hope his name is at the top of the list, so there is a long way to go before he knows for sure where he'll be playing this season.

For the time being, he must try to focus on Real Madrid's pre-season and he is currently training hard, although he hasn't participated much in the on-the-pitch jokes.

For the Spain international, football is all that matters right now when he crosses those white lines.

From Zinedine Zidane's point of view, he is happy with the player and wanted him to stay as hard as it is to find 20-goal-a-season strikers.

Whether or not the Frenchman has Morata at his disposal on September 1 does not remain to be seen.

At Real Madrid, the doubts of Cristiano Ronaldo's departure have long been forgotten and those at the club, both the directors and the rest of Zinedine Zidane's squad, believe he'll be back for the 2017/18 season.

He won't, however, be there from the very beginning, due to the fact that his summer holidays started late as a result of the Confederations Cup.

Zidane wants him to take a full month to rest and that's exactly what he'll do, which means he is likely to make his next Real Madrid appearance in the Supercopa de Espana at the home of Barcelona, ​​the Camp Nou.

Long before that, he will check in for a medical in Madrid next week.

This is nothing for fans of Los Blancos to worry about, as he is not suffering from any specific injury, but this is simply a routine check-up to monitor his physical state, especially those of his knees, which kept him sidelined until the third week of the season this time last year.

After those three or four days in the Spanish capital, he'll go back on holiday and will spend some time with his family, as well as attending events with his sponsors, one of which will be in Japan.

Then, at the end of July, he will return to work, while he also has his first tax-related court date on July 31.

When the rest of the squad returns from the United States tour, they'll link up with Ronaldo at Real's Valdebebas training complex.

The 32-year-old will not be taking any part in the pre-season friendslies on the other side of the Atlantic, which means he'll miss the Clasico friendly in Miami on July 30.

He'll also likely be missing when the Champions League winners take on the Europa League champions - and Ronaldo's former team - Manchester United in Skopje in the UEFA Super Cup on August 8.

That's because Zidane wants him to train for a minimum of 10 days before taking part in a competitive match and he is unlikely to risk changing that rule for such an important game, one which could end Real's sextuple quest before it even has a chance to get going.

As a result, the first leg of the Supercopa de Espana at the Camp Nou on August 13 - although that date is yet to be 100 percent confirmed by the Spanish FA - will be the fixture in which the Portuguese player wears white once again.

He would also then be able to feature in the return leg three days later and then be in peak condition by the time the league season season starts on August 19 or 20.

Mourinho: Signing Cristiano Ronaldo was impossible and it's very difficult with Morata

Currently on tour in the United States with his Manchester United side, Jose Mourinho fielded questions from reporters regarding the potential signings of Real Madrid pair, Cristiano Ronaldo and Alvaro Morata, both of which would appear to be non-starters.

"We didn't think about signing Cristiano at any time," he said.

"He is too important a player in a club with great economic power and there was no reason to think that he wanted to leave.

"I am not an advocate for a club to waste time with impossible missions and that's why we never considered him."

It appeared that Manchester would be the striker's destination after Mourinho himself had stated that Morata would be "very important here."

However, the sticking point remains the fee that Los Blancos wish to recoup.

"Whether Morata can end up at United is a question for Florentino [Perez] and Jose Angel Sanchez," the Portuguese continued.

"Madrid are the ones who have set the price and, as I said, we have not reached an agreement.

"He debuted with me and I have enjoyed his evolution a lot, but the way I see it, it will be very difficult that he can sign for us."