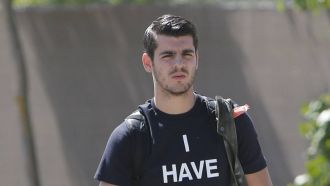 Wednesday, 12 July 2017
The interest shown by the Premier League champions could now be the Madrid player's only exit route from LaLiga.

Chelsea are preparing an offer of around 80 million euros for Real Madrid striker valvaro Morata. This potential move to the Premier League champions now looks like the most likely exit strategy for the player after Manchester United splashed out on Everton frontman Romelu Lukaku.

All strange so different just a week or so ago with all conversations pointing at a move to Old Trafford for the young Spaniard - and this has not yet been ruled out as José Mourinho has let one of the club's most prolific goalscorers leave and last season's top marksman Zlatan Ibrahimovic is also on his way to yet another new chapter. United are still keen on doing business with Madrid and have a college of Morata's in mind.

Chelsea and Madrid working together

According to AS sources involved in the Morata operation the London club will submit a bid of close to 80 million euros, including all variables, to Real Madrid in the next few days. The Spanish and European champions, however, are still hoping to be compensated with 90 million euros for the services of the young man that only returned to the Spanish capital a year ago after impressing at Juventus. The Italian in charge at Stamford Bridge, Antonio Conte, has not hidden his admiration over Morata and although the asking price is no different than that made clear to United, the working relationships between the two clubs is much more fluid.

Morata to accelerate the transfer process

Personal terms between the player and the London club do not appear to show any signs of suffering difficulties with a deal expected of four or five years and a remuneration greater than the six million euros net that Morata was on in Spain. Sources at AS have reported that the player, for his part, is currently in Valdebabas, Madrid, and will not travel with the squad to the USA as he looks to accelerate the conversations in the early part of this week and get clarity on his

James Rodriguez to Bayern Munich on a two-year loan deal

The Colombian will play for the German side for the next two years on loan with Bayern paying his wages reportedly.

James Rodriguez to Bayern Munich is official. The Colombian will play for the German champions under Carlo Ancelotti for the next two years on loan from Real Madrid with Dani Ceballos 'recent signing of a contract with the club cementing James' future.

Real Madrid wanted € 75 million for the player while Bayern were holding the firm for € 60 million. A loan deal, which was mentioned as a possibility with Bayern paying his wages and a fee to the governing LaLiga and Champions League winners, has come to pass. Real Madrid will report € 5 million a year for two years and have the option to buy the player for € 35 million after the two year spell.

"James is a very versatile player. He's a goalscorer himself, he sets up a lot of goals and on top of that he's great from set-pieces. There's no question that this transfer further increases the quality in our team. "

Talks over Bayern and James went into overdrive

Talks over a potential move had moved into sixth gear on Monday night as Bayern's directors and Jorge Mendes, the player's agent, negotiated into the early hours and reconvened on Tuesday morning to hammer home the finer details.

James had asked Mendes to speed up the deal as he was not keen to travel to the USA with Real Madrid if he was not going to be playing at the Santiago Bernabeu next season. As it turns out, he won't be, and will head to Bayern despite undergoing all of Real Madrid's physical screening and medical tests on Monday ahead of the new season.

It brings to an end three years at the club for the Colombian where he played in 111 games, scored 6 goals and had a helping hand in 41 more and he also won two Champions League and a LaLiga title.

Dani Alves has PSG medical, deal set to be confirmed

Brazilian full-back Dani Alves, who was released by Juventus last month, is poised to complete a free transfer to Ligue 1 side Paris Saint-Germain.

Dani Alves is set to sign for Paris Saint-Germain on a free transfer, with reports in France saying a deal for the right-back could be confirmed later on Tuesday.

Alves snapped in Paris ahead of PSG switch

Photographers have emerged of the 34-year-old Brazil international in the French capital for a medical with PSG, which he is now understood to have completed.

Alves parted company with Juventus in June after a single season with the Serie A champions, having moved to Turin in June 2016 following eight years at Barcelona.

To sign a two-year deal at the Parc des Princes

The defender, who had been strongly tipped for a reunion with former Barça boss Pep Guardiola at Manchester City, is expected to join PSG on a two-year contract.

18-year-old Gianluigi Donnarumma, who in June had announced his decision not to sign a new Milan deal, has committed to the Rossoneri until 2021.

AC Milan goalkeeper Gianluigi Donnarumma has agreed a contract extension that will keep him at the San Siro until 2021, the club announced on Tuesday.

"We continue together! AC Milan and Gianluigi Donnarumma have reached an agreement to extend the goalkeeper's contract through to 2021," read a statement on the club's website.

Donnarumma to put pen to paper on new contract on Wednesday

The 18-year-old, regarded as the greatest prospect in his position in world football, will officially sign his fresh Rossoneri terms on Wednesday.

His previous deal had been due to expire in 2018 and he had announced last month that he would not sign an extension, to the immense disappointment of the club's board.

At the time, it was suggested that Milan be offering the player a new deal with an annual salary of five million euros.

Milan fans had consulted to his initial refusal to accept those terms but unveiling a banner reading 'Dollarumma' as the player turned out for Italy at the European Under-21 Championship in Poland. They also threw false bank notes at him.

Donnarumma made his debut as a 16-year-old in October 2015 and has already been capped four times at full international level by Italy.

He is tipped to succeed Gianluigi Buffon, the Juventus legend who is expected to retire at the age of 40 after next year's World Cup in Russia.

Atlético Madrid insist they have not struck a deal with AS Monaco that would see the midfielder join the LaLiga club in January 2018.

Atlético Madrid have denied that they have reached an agreement in principle with AS Monaco over the signing of defensive midfielder Fabinho.

The LaLiga and Ligue 1 clubs were believed to have struck a deal that would see the 23-year-old arrive at Atlético in January for a 45m-euro transfer fee.

However, the Madrid side says no negotiations have taken place.

Fabinho has been on Atlético's list of potential midfield reinforcements, with the likes of Paris Saint-Germain, Manchester United and Manchester City also interested.

Fabinho is a major figure in Monaco's title-winning team

The Brazil cap, who in 2012/13 had a loan spell with Real Madrid's' B 'team, Castilla - and played once for Los Blancos' senior side - was a key man for Monaco last term.

Under Portuguese coach Leonardo Jardim, the Principality outfit not only beat PSG to the French title but also reached the semi-finals of the Champions League.

Atlético unable to register new players until the start of 2018