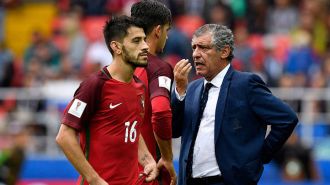 Fernando Santos: Portugal will not play better without Cristiano Ronaldo

Monday, 03 July 2017
In the aftermath of winning the Confederations Cup third-place playoff against Mexico, Portugal boss Fernando Santos insisted that the team is better with Cristiano Ronaldo.

The No.7 was missing from the match - which was won 2-1 - as he had left the camp to meet his newborn twins after the team was knocked out by Chile in the semi-finals.

"I don't believe Portugal play better without the best player in the world," he said, dismissing the suggestion that it was an advantage to be without the 32-year-old.

"However, we can't separate the team from him or him from the team.

"Portugal don't play better without him."

He also insisted that his side would be rightly considered among the favorites in any tournament they played.

"This is a fantastic group," Santos said.

"The players and the team are growing together and Portugal will always be a candidate to win any tournament in which we participate."

The coach went on to say that the team will be looking to add more success to last year's European Championship win.

"We are going to continue to play with our philosophy," he added.

"We are not satisfied.

"Today we are happy, but we wanted to play in the final."

Portugal will hope to be back in Russia next summer and are currently second in their group for the World Cup qualification.

Mino Raiola is due to meet AC Milan officials to receive a bumper contract offer for his client Gianluigi Donnarumma in an attempt to keep the star goalkeeper at Stadio San Siro.

Top of the agenda for the Italian teenager's agent will be the weight of release clause attached to the deal that could serve as a way out should the Rossoneri continue to struggle on both domestic and European fronts.

After revelations that the shot-stopper isn't going to sign a new contract before the European Under-21 Championships, club such as Real Madrid became interested in making an approach for his services, but Donnarumma has since made apparent his intention to stay in Milan ahead of these crunch talks.

Germany's Low delighted with progress of his young team

Germany coach Joachim Low heaped lavish praise on his young, experimental team after they beat Chile 1-0 to win the Confederations Cup on Sunday.

Low left behind players such as goalkeeper Manuel Neuer, Jerome Boateng, Sami Khedira, Toni Kroos and Thomas Muller yet his side still managed to beat the Asian, African, CONCACAF and South American champions on their way to lifting the title.

His team on Sunday had an average age of just over 24, compared to over 30 for Chile. Julian Draxler, who captained the side aged 23, was their most experienced player with 35 caps.

"I'm immensely proud of this team because they've been together for only three-and-a-half weeks," Low told reporters.

"You could actually feel in all of our training sessions, every single day, that something was happening there. You could feel an unbelievable hunger for victory, both on the training pitch and during matches, so it's well-deserved.

"The fact that these young players have won this tournament makes it an historic achievement, it's unique in Germany's history, it's outstanding."

The win came two days after Germany beat Spain 1-0 to win the European under-21 championship.

"All the players who were in the squad were in a much better position than they were before," Low said.

He added that the final was a bruising match.

"Our team had to fight hard because the Chileans are very robust players," he said. "We've been fighting literally for every single ball."

He also thought Chile defender Gonzalo Jara could have been sent off for elbowing Timo Werner in an incident which was reviewed by the referee using a video replay.

"That could have been a red card because it was a blow in the face and if the referee sees something like that, he could have dismissed him," Low said.

Real Madrid right-back Danilo is the subject of formal interest from both Juventus and Chelsea as the Italian and English champions look to reinforce their flanks.

Experiencing a season of ups and downs last time out, the Brazilian ended on a positive note but struggled to convince the fans who often dreaded his name entering the teamsheet.

In reply, Los Blancos are open to a deal so long as it tips 35 million euros and is desired by the player.

Danilo knows that, just as before, he will begin next season as second choice to Dani Carvajal on the right side of the defense and that he needs game time to compete for a spot in Brazil's World Cup squad.

Another man further up in Zinedine Zidane's mind is Nacho Fernandez, who has often filled in at right-back and may prove enough for Real not to have to sign a replacement, while bringing through an academy product such as Achraf Hakimi to supplement the squad.

However Danilo's mind is far from made up and there is time for him to study the potential offers that Juve and Chelsea may put in front of him during the summer window.

Kylian Mbappe is one of the protagonists of this transfer window and has been linked with a move away from Monaco since before the end of last season, but he could still stay at Stade Louis II.

The 18-year-old would, though, make two demands to the Ligue 1 champions for him to reject a transfer away, possibly to Real Madrid, and to stay for another season.

According to L'Equipe, he would firstly want to increase his salary from 1.2 to 8.5 million euros per year and would secondly want the exodus of players to stop.

Already Bernardo Silva has left the team which reached the Champions League's final four last season and the forward would only want to stay if the club directors can plug the talent leak.
E-mail : [Email protected]
Previous: Signs in Aston Villa | Next : New contract
Views: 4752
- 9591 previous day

The week starts with Liverpool - Arsenal and 0% rake!

At 22:00 at "Anfield" will host the great match between her Liverpool and Arsenal which completes the 3η Premier League match.

Both teams come from League Cup victories, with Liverpool beating Lincoln (7-2) and Arsenal overcoming Leicester (2-0). In the standings, Liverpool and Arsenal are tied in the top three with six points.

Arsenal have suffered four defeats in as many Premier League games when facing Liverpool away from home. These victories of the "reds" were accompanied by 4/4 over 3,5 goals while their last seven games with home team Liverpool gave us goals and spectacle (7/7 "4-6 goals").

The big derby Liverpool - Arsenal plays with 0% rake * and many special bets.