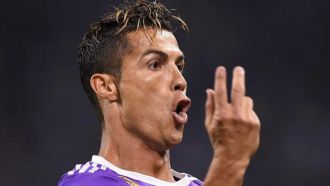 Friday, 30 June 2017
A sigh of relief swept through Real Madrid on Thursday evening after the first contact with Cristiano Ronaldo since the forward's wantaway revelations.

Amid allegations of tax fraud and an impending date in court, July 31, the Portuguese captain was told to have expressed his desire to leave Spain for good, putting Los Blancos on red alert.

However Ronaldo briefly contacted the club hierarchy after touching down in Madrid following his nation's Confederations Cup defeat, on the way to meet his two new children, and the outcome was one of greater optimism around the Estadio Santiago Bernabeu.

Having not heard at all from the 32-year-old since the story broke, and with the formal meeting between Florentino Perez and the player not due until next week, Real now considers Ronaldo to be once again on good terms with the club and assured that they will do all they can in his fight to clear his name with the Tax Agency.

In the fortnight since Ronaldo was first reported to be demanding a move, no club has made an offer for the winger with Paris Saint-Germain believed to be leading the chase.

Although in Madrid they expect a personal communication from Les Parisiens chairman Nasser El Khalifi to Real president Perez before such talks commence, which is yet to occur.

Cristiano Ronaldo presents his newborn twins to the world

Now the parent to two more children, Cristiano Ronaldo has posted an image of himself holding his newborns after leaving Portugal's Confederations Cup campaign on Thursday.

"So happy to be able to hold the two new loves of my life," he posted on his Facebook page along with the first photo of the twins.

The Real Madrid star flew out of Russia on Thursday after the children were born via a surrogate mother four weeks ago.

Why did Cristiano Ronaldo not take Portugal's first penalty?

Portugal were defeated by Chile on penalties on Wednesday night without Cristiano Ronaldo getting the chance to score against Claudio Bravo.

Leaving Russia and the Confederations Cup with a bitter taste in his mouth, the Real Madrid star has been at the center of criticism for not stepping up to take the first penalty.

Contrary to popular belief, the decision was not solely the forward's as coach Fernando Santos and his staff decided to assign kick taker's order through the outcome of a draw.

The four-time Ballon d'Or winner lost that draw and in turn his nation lost the game, as his teammates proceeded to take the initial and decisive penalties.

Ricardo Quaresma stepped up to take the first before being stopped by an in-form Bravo who continued to prevent Joao Moutinho and Nani from converting their spot-kicks as Ronaldo watched on helplessly.

Had the outcome of the draw differed, then the result of the semi-final could have certainly changed as Ronaldo would have been likely to step up and convert the first penalty.

Barcelona prepares for a Clasico-heavy pre-season

All plans are now in place for Barcelona's pre-season, which kicks off on July 12 when those players do not participate in internationals return to Catalonia.

It will be two days later that those involved in June's World Cup qualifiers and friendslies return, and a week after that for the European Under-21 Championship and Confederation Cup participating stars.

It's then off to the USA for the International Champions Cup, kicking off in New York against Juventus on July 22, four days after which Manchester United are on the horizon in Washington DC.

Sticking to the east coast, Barcelona then face Real Madrid in Miami on July 29, although the Clasico will take place on Sunday morning in Spanish time, at 01:30 CET.

Immediately afterwards it's back to Spain and the Camp Nou to prepare for the Joan Gamper Trophy against Brazilian outfit Chapecoense on August 7.

Before LaLiga arrives, the Blaugrana must deal again with a Clasico occasion in the form of the Supercopa de Espana double-header, hosting Madrid on August 12 or 13 before heading to the capital on August 15 or 16.

Defoe will return to Bournemouth 16 years after his last game for the club, having scored 18 goals while on loan from West Ham United during the 2000-01 season.

"It's great to be back and I'm really looking forward to this challenge," Defoe said in a statement.

"The Bournemouth fans know that every time I pull the shirt on I will give 100 percent, and the one thing I can guarantee is goals."

However, the 34-year-old England international's 15 goals in 37 league appearances last season were not enough to keep Sunderland in the Premier League.

His Sunderland form earned him an England recall under manager Gareth Southgate and he scored on his return against Lithuania in a World Cup qualifier in March.

The times when Atletico Madrid had to sell their biggest stars in order to move forward seem to be a thing of the past.

Those experiences of selling Fernando Torres, Sergio Aguero and Radamel Falco are consigned to history and Los Rojiblancos are more desperate than ever to keep hold of their big names in order to compete in LaLiga and Europe, with Saul Niguez the latest one they are hoping to tie down to a long-term deal.

Despite selling Diego Costa, Arda Turan, Felipe Luis and Joao Miranda in recent seasons, Atleti have started to lose their label as a selling club, and their policy is to retain the spine of their squad.

Koke's release clause is the highest in their squad at 150 million euros, but Antoine Griezmann, Jan Oblak and Yannick Carrasco also have release clauses of 100m euros or more.

Saul's extension, which will see him stay until 2021, is one step further in ensuring the continuity of this group and the loyalty of the players to the club.

All of the extensions mean that Atleti will be using more than half of their budget on players' schedule, but they feel that there is no other way to compete for the Champions League.

The extensions are a sign that their best players are buying into what Diego Simeone has told them - that there futures are with Atletico Madrid.
E-mail : [Email protected]
Previous: Bakayoko and Manolas | Next : Full agreement
Views: 4727
- 9590 previous day