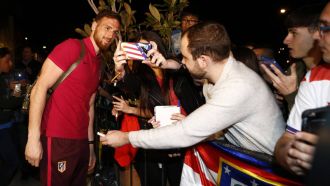 Jan Oblak has flown off in to the sunset for his holidays, but his name continues to circulate in the transfer market.

The Slovenian 'keeper is attracting admiring glances from across Europe following two excellent seasons for Atlético Madrid, in which he has won consecutive Zamora Trophies (the prize awarded to the LaLiga goalkeeper with the most clean sheets).

PSG to keep trying for Oblak

PSG have shown the most concrete interest in Oblak. The French club offered € 60m for his services, then € 75m. Atlético rejected both bids. According to Goal, PSG are now considering activating Oblak's € 100m release clause. This would leave Atlético powerless to prevent his exit. Or, at least, powerless to prevent talks between Oblak and PSG.

Nasser Al- Khelaïfi, the PSG president, will make another statement of intent in his quest to bring the Champions League glory to Parc de Princes. He has already made a succulent offer to Andrea Berta, Atlético's sporting director, to take on a similar role at PSG, overseeing transfers.

The performances of Trapp and Areola, the two current goalkeeping options for Unai Emery, have pleased PSG that they require a top-level goalkeeper.

"A lot of clubs are always going to want the best 'keeper in the world… especially two," Oblak's agent recently stated. The second interested party could be Manchester United, in the case that David De Gea leaves Old Trafford.

Athletic will not make it easy

Nevertheless, Atlético have made it clear that they will not make it easy for any of their key players to leave the club, particularly in the context of the FIFA transfer ban, which means Diego Simeone would not be able to sign a replacement.

Oblak's contract expires in 2021, but it is not out of the question that Atlético offers him and extended deal with a higher-value release clause. The Slovenian spoke recently about his future at Atlético: “You never know in football, but everything suggests that I'll continue in Madrid. I'm satisfied at Atlético. "

Why did Jorge Mendes meet with Barcelona representatives?

On Tuesday evening in Barcelona, ​​Jorge Mendes and several of his colleagues held a meeting with representatives of the Blaugrana, but what was the purpose of the same?

There are several possible transfer operations that would explain it.

On the one hand, Mendes could have met to discuss the departure of Andre Gomes, although this option is the least feasible, apparently.

Valencia's Joao Cancelo or Benfica's Nelson Semedo are more likely options for the Catalans and Mendes has maintained contacts to ensure that one of his many players is on the Barcelona payroll for next season.

Pepe: Cristiano Ronaldo is completely focused on the Confederations Cup

Though many would like to believe otherwise, Cristiano Ronaldo is concentrating only on the Confederations Cup and not his club future, according to Portugal defender Pepe.

The 34-year-old has been a teammate and close friend to the forward at club level for Real Madrid for many years, although he is set to depart soon when his contract expires at the end of the month.

It is unclear whether or not Ronaldo will follow him out of the Estadio Santiago Bernabeu exit door but the rumors about his future aren't something the player is taking note of.

"Cristiano is completely focused and motivated on the tournament," Pepe said.

"We are here to represent our people and try to go as far as possible."

Although Pepe is expected to move to Paris Saint-Germain, he maintains that there is no definitive agreement in place yet.

"At the moment, I have no contract with anyone," he added.

"Now I just want to enjoy this competition with the national team, that's all I'm thinking about.

"We are all very motivated because we want to bring happiness to the Portuguese people."

Spanish captors said on Tuesday they had filed a claim against Manchester United manager Jose Mourinho on two counts of tax fraud dating back to when he coached Real Madrid.

The Portuguese manager owes Spanish tax authorities 3.3 million euros (2.91 million pounds), a Madrid prosecutor said in a statement, adding it had presented a claim to a local court.

Mourinho left Real Madrid in 2013 to manage English club Chelsea for a second spell before signing with United in 2016.

Prosecutors said he had failed to declare revenues from his image rights in his Spanish income tax declarations from 2011 and 2012, "with the aim of obtaining illicit profits."

They said Mourinho had already settled a previous claim relating to his Spanish taxes, which resulted in a penalty of 1.15 million euros in 2014. But tax authorities later found that some of the information presented in that settlement was incorrect, the accusedors said.

Known as "the Special One," Mourinho, 54, is one of the most prominent and successful coaches in soccer today.

In the season just ended, he won three trophies in his debut campaign at Manchester United, although he drew criticism after a poor league performance in which United finished sixth in the Premier League.

In European competition, he has led Porto to UEFA Cup victory in 2003 and a Champions League triumph in 2004, and also won the Champions League with Inter Milan in 2010. He has owned a haul of domestic trophies with Chelsea and other clubs.

The claims against Mourinho come amid a lengthening list of tax fraud cases involving soccer stars in Spain.

Real Madrid player Cristiano Ronaldo has been called to testify on July 31 in Madrid on statements that he hid income from tax authorities between 2011 and 2014, the court said on Tuesday.

Real Madrid was not immediately available for comment on the allegations against Mourihno or Ronaldo's hearing.

Gestifute, a Portuguese-based soccer agency that represents Mourinho and Ronaldo, did not immediately respond to requests for comment.

Dugarry: Verratti is anything but a great player

Ernesto Valverde has placed Marco Verratti on the top of his priorities' list for the current transfer market, but the former Barcelona player, Christophe Dugarry, maintained that the PSG midfielder is overrated.

Questioning the Blaugrana board's interest in Italy international, the 1998 World Cup winner went on to criticize the youngster's way of living and professionalism.

"I'm surprised, because Verratti is anything but a great player," he told the French channel RMC Sport.

"He's a good player, but what has he achieved?

"Every six months he appears to the media asking for a raise, but he is often injured because his way of life is not the right one.

"Given his performances [on the pitch], he should stay at PSG for a while before going to Spain.

"I think that the way Barcelona are acting doesn't feel right."

Barcelona are reportedly set to strengthen their midfield with the acquisition of Santos star Lucas Lima.

It is an area of ​​the field that the Blaugrana are determined to reinforce in this summer and are also keen on recruiting Marco Verratti from Paris Saint-Germain.

According to Fox Sports Brazil, an agreement is already in place between the clubs for the player to arrive at the Camp Nou in January 2018.

Lima already has some links to Barcelona as his girlfriend Raffaela is Neymar's sister and his representative is Neymar's father, who is also an agent to the Blaugrana forward.

As the 26-year-old's contract expires in December 31 upon the end of the season in his homeland, he would join Barcelona on a free transfer.

Lima has been capped 14 times by the Selecao and has been tracked by a number of prestigious European clubs, including Real Madrid and Bayern Munich.
E-mail : [Email protected]
Previous: "Clean," says Mourinho | Next : Proposed by Paris Saint-Germain
Views: 4699
- 9686 previous day