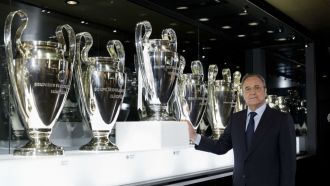 Monday, 19 June 2017
Real Madrid will be led by Florentino Perez for another four years, with no other candidates running against him in the club's presidential elections.

The deadline for candidacies to be presented was midnight on Sunday night and, for the third election in a row, Perez has won uncontested.

17 years after he first assumed the presidency in 2000, and eight years since his return in 2009 after a three-year hiatus, the 70-year-old is as determined as ever to bring glory to the Estadio Santiago Bernabeu.

He has overseen one of the most prestigious periods in the club's history, with three Champions Leagues won in four seasons, but he'll be hungry for more success and could kick off his new term by renewing the contract of Zinedine Zidane, the man who led the team to the last two of those European titles.

Perez could also make a statement in the transfer market, as he has become defined over the years by his Galactico signings.

Kylian Mbappe would certainly fall into that category and his arrival would ensure this new term gets off to a great start.

Cristiano Ronaldo has stated his intention to leave Real Madrid this summer and Portuguese and English media both expect his landing spot to be Old Trafford.

Reporters in both countries believe a return to his former club Manchester United is on the cards.

Sky Sports have reported that the player would be keen on a return to the Red Devils, although they also claim that those in the Old Trafford offices are unconvinced that the 32-year-old will actually leave Estadio Santiago Bernabeu this summer.

Meanwhile in Portugal, A Bola - the publication which reported on the player's desire to leave Spain - also state that he wants to re-join United.

It is a move that would please the English club's fanbase, who still look back with fond memories on his time at the club, from 2003 and 2009.

Zidane to Cristiano Ronaldo: We need you

Cristiano Ronaldo's future is up in the air after he stated his intention to leave Real Madrid, but Zinedine Zidane hopes he can convince the player to stay in the Spanish capital.

As soon as the Frenchman heard of the player's intentions, he phoned the Portuguese to discuss the announcement and discover the real reasons behind the decision to go public with his discontent.

Zidane's word means a lot to Ronaldo, as shown by the fact that he was the only person able to convince the player into accepting reduced playing time for Los Blancos last season.

The message from Zidane to his star forward was clear and he told Ronaldo that this current Real Madrid team could go on to win plenty more and that they needed him for his goals, but also his winning mentality.

The coach, aware of the influence that the Portuguese has on the players at the club and that they owe a lot of their success to him, is confident that the problems can be solved.

Determined not to give up and keep hold of the No.7, Zidane will continue to talk to the player throughout the summer and, if nothing is resolved by the end of his holidays, he will sit and speak to the player in Madrid.

Should he be unable to convince Ronaldo to stay, he has always said he does not want to keep any players against their will and that he does not want anyone involved who is not 100 percent committed to the cause.

The coach is not alone in contacting the wantaway star, as Sergio Ramos also phoned his teammate in a bid to convince him to stay.

It should not be forgotten that the defender himself has been in Ronaldo's position before, in terms of wanting a move away, but Ramos ultimately opted to stay put and has gone on to win European and domestic titles, giving Ronaldo someone to take note from.

Real Madrid have made a deal for Theo Hernandez

Real Madrid and Atletico Madrid have come to an agreement for the transfer of Theo Hernandez, one which will avoid the need for the depositing of his release clause with LaLiga.

That clause is set at 24 million euros, but Los Blancos will pay their city rivals a couple of million more in order to reduce tensions and will do so in four installations.

Directors of both clubs have held a number of meetings on the subject and the signing off on the deal suggests that the non-aggression pact the two clubs have maintained for several years has come to an end.

The 19-year-old, who has spent the 2016/17 season on loan at Alaves, was determined for the transfer to happen, despite being under pressure to change his mind ever since his agent first told Los Rojiblancos' directors of his intentions.

Now his signature will soon be on Real Madrid paper and will be presented at the Estadio Santiago Bernabeu in the first week of July.

Hernandez is also still determined to represent Spain at international level, having decided against turning out for France, the country of his birth.

He has already started the process of nationalization that will make him eligible to represent Spain at both senior and Under-21 levels.

Verratti: Let me go to Barcelona, ​​I will not go back to Paris

Barcelona target Marco Verratti has told his current club, Paris Saint-Germain to let him leave and has expected that he will not return to the French capital.

PSG have consistently refused to give in to the player's wishes and have made it clear to the LaLiga side that their star midfielder is not for sale.

"Let me go to Barcelona, ​​I will not go back to Paris," read a message that Verratti sent to the club, according to La Gazzetta dello Sport.

It is expected that the Italian move to the Camp Nou this summer, that Barcelona will have to pay close to 100 million euros, although the Ligue 1 side are adamant that he will stay at the Parc des Princes.
E-mail : [Email protected]
Previous: "Ask them who my dad is." | Next : It ends with Juve, City is waiting for him
Views: 4780
- 9531 previous day