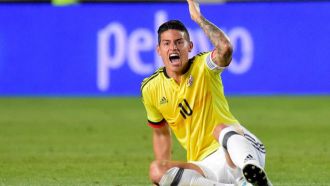 Tuesday, 13 June 2017
Already on vacation, James Rodriguez is still mulling over his future, the midfielder closing the season suggesting that his time at Real Madrid was over, but leaving without saying anything to his teammates or the board of the club.

Nine days later neither the player nor his agent, Jorge Mendes, have made any moves whatsoever.

No communication, similar to Alvaro Morata, nor any message that leads one to think of a quick and definitive solution to his situation.

Zinedine Zidane went on holiday, asking for continuity to the squad that took him to the double.

The Frenchman knows that this circumstance is impossible to settle, but believes that it is a gesture that must be done with his players and the Colombian is no exception.

If James suspects to continue in the Spanish capital, he would be welcomed by the coach.

The leaders of the club are clear that in case of leaving, the sale price will be around 75 million euros as a minimum.

In the absence of James' request and the arrival of the firm offers, Madrid believes that the team that is most interested in signing the player is Chelsea.

Following weeks of speculation surrounding his future, Antoine Griezmann has put pen to paper to extend his contract with Atletico Madrid until 2022.

Immediately after the 2016/17 LaLiga season pulled to a close, Griezmann rated the chances of him playing for Manchester United next season at six out of ten, although he did then go on to say the chances of him remaining with Atleti were seven.

The following day, however, the concerns of Atleti supporters became more serious, when Griezmann admitted it was time for him to leave.

"I want to win titles and that is what I will consider when deciding my future this summer."

Things changed when Atletico's transfer ban was upheld, with the Frenchman then coming out and committing his future to the club, immediately turning to social media to state his position.

"Now more than ever #Atleti," the player posted.

From then on it was clear that his future remained with the Rojiblancos.

"It's a tough time for the club," he told French media.

"It would be a dirty move to leave now."

This most recent extension is Griezmann's third since joining the club in 2014, when his contract had a release clause of 65 million euros.

Real Madrid have confirmed to Jesus Vallejo that he will be among the senior squad's center-back options for the 2017/18 season.

During the first half of a loan spell at Eintracht Frankfurt, the Spaniard was a revelation in the Bundesliga and was only slowed by injury problems that began in February.

As Pepe leaves the Estadio Santiago Bernabeu, there will be no need to splash the cash on a replacement as homegrown option Vallejo has Zinedine Zidane's blessing to make the step up and challenge Sergio Ramos, Raphael Varane and Nacho Fernandez for a place in the defense.

Contact between Madrid and the 20-year-old has been constant throughout the season to ensure that the player was doing his homework and developing in the right way.

That attention to detail has been reciprocated by Vallejo, who is eager to get started at Real and can look forward to pre-season once the European Under-21 Championship is completed, which he expects to do as a first-choice center-back for Spain.

Coutinho: Talking about Barcelona is complicated

Liverpool star and Barcelona target Philippe Coutinho, who is currently with the Brazilian national team in Melbourne, has played down talk linking him with a move to the Catalan giants.

Barcelona have been reported to be interested in the player for some time now, but Coutinho himself admits a move would be difficult at this point.

"Talking about Barcelona is complicated," he said at a press conference.

"I have a contract with Liverpool and it's long, I recently renewed it."

Turning his attention back to Brazil, Coutinho stated that he was fully focused on the upcoming friendly against Australia.

"My focus now is on the present and the national team," he added.

"My goal is completely with Brazil."

Coutinho played 90 minutes in a recent friendly win over Argentina in Melbourne, while their meeting with Australia will take place on Tuesday.

Although Barcelona have set their eyes on the pursuit of Paris Saint-Germain star Marco Verratti, a representative representing the French club ruled that they should not intend to let the player depart.

PSG president Nasser al Khelaifi will try to improve the contract of the Italian international as he is considered one of the pillars of the club's project and they are not willing to give it up for any price.

"[His price tag] is neither 80 million euros nor 100m euros, because Verratti is not for sale," a senior PSG spokesman told MARCA on Monday.

Looking ahead to next season, the Qatari owners will once again attempt to lift the Champions League trophy and they don't seem willing to weaken their squad with the departure of the talented 24-year-old, who is an important part of Unai Emery's plans to bounce back from the outgoing disastrous season.

Italy's AC Milan have signed striker Andre Silva from Porto for a fee that could rise to 40 million euros (35.4 million pounds), the Portuguese club said on Monday.

The 21-year-old, who has signed a contract that will keep him at Milan until June 2022, made 32 league appearances for Porto last season, scoring 16 goals. He also scored four times in eight appearances in last season's Champions League.

Milan paid Porto an initial 38 million euros for Silva, with a variable component that could see the fee rise by an additional two million euros, the Portuguese club said in a statement.

Milan finished sixth in Serie A last season, earning a place in next season's Europa League qualifiers and ending a three-season absence from European competition.

Valverde gets to know the Ciudad Deportiva

On Monday, at Sant Joan Despi, Ernesto Valverde took the time to get to know the changing rooms, his office, the Tito Vilanova pitch, the press room, the work of the technical staff, the dining room ...

He was accompanied by Barcelona president Josep Maria Bartomeu, sporting director Robert Fernandez, Urbano Ortega, a member of the technical staff, Albert Soler, the director of professional sports, and the delegate of the first team, Carles Naval.

Their visit coincided with Aleix Vidal's recovery, the defender exercising after overcoming a dislocation of his right ankle.

He separated the Txingurri, who was presented on June 1 as the new coach of Barcelona for the next two seasons with an option for a third.
E-mail : [Email protected]
Previous: Griezmann… 2022 | Next : Tricolor babies
Views: 4805
- 9648 previous day