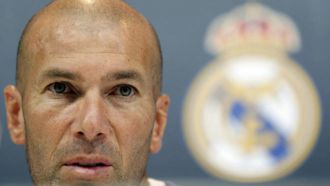 Wednesday, 17 May 2017
Real Madrid travel to face Celta Vigo on Wednesday night to finally fulfill their game in hand and Zinedine Zidane has hit back at claims of the Galicians giving the title challengers as easy ride.

One of the haunting images of Spanish football is the 'Maletin' or briefcase, used to denote a game where one side allows a dead rubber to go the way of an opposition team who have more to play for, and it's tantamount to match fixing.

The concept was put to Zidane ahead of his side's trip north-west.

"I will not answer any questions about that, I only think about the game," the coach told reporters. "The Celta team that will play in Vigo are going to come out as professionals, as they have to.

"It's difficult [for us] because they are a good team. It's important to think about your opponent, we always study them, but I'm interested in what we're going to do."

"It's very simple, we're ready and we have two finals to play before the league finishes."

Confirming Cristiano Ronaldo's presence in the matchday squad for the game at Estadio Balaidos, Zidane gave an update on Gareth Bale's injury progress.

"Gareth is a lot better and he has trained on the pitch, although not with the first-team," he noted. "But we can only think about tomorrow's game and [Bale] won't be there."

With a number of players on the verge of suspension going into the penultimate domestic fixture, the Real coach insisted that Ronaldo, Isco and Lucas Vazquez will be attentive to their discipline against Celta.

"They will do everything so that they don't receive another card," Zidane said.

Keylor Navas was one of the stars of Sunday's 4-1 win over Sevilla and the Madrid boss took time to reinstate his confidence in the Costa Rican.

"We have three very good goalkeepers," Zidane added. "I don't know what's going to happen next year, but I'm happy with all three of them.

"They get along very well. Whichever ones plays, they do well. Ruben [Yanez] hasn't played much but what he's done all year for the team has been spectacular."

Los Blancos face Celta at 21:00 CET on Wednesday, safe in the knowledge that four points in their next two games will deliver the title.

Bernabeu renovation work to start after the summer

Works to renovate Real Madrid's Estadio Santiago Bernabeu will not start until the end of the summer.

Despite Madrid's city council approving the Special Plan in relation to the stadium's renovation project last February, the definitive go-ahead is yet to be given.

There are still a number of declarations to be presented before the council can give its final approval of the works.

This slight delay will not affect pre-existing deadlines or plans, of which the most important will take place in the summers of 2018 and 2019.

MARCA understands that definitive approval could come in the middle of June, in which case work would not start until September.

Real Madrid are trying to keep the project under control and keep its members and local residents on their side. The club has taken charge of the entire cost of urban reform in the surrounding area.

Beyond the external work on the stadium, the club are changing various aspects inside the ground including the private boxes, which will now form part of the stand as a result of the new design that is being implemented.

On June 11, the Bernabeu will host the Classic Heart Match against Rome. Before that, on June 3, Madrid fans will be able to go to the stadium to watch the Champions League final streamed live from Cardiff on giant screens that will be installed on the pitch, as was done for last season's final in Milan.

Zinedine Zidane's Real Madrid are closing in on another record and are looking foward to another challenge, hoping to break the highest ever away goal tally over the course of a LaLiga campaign before the end of the season.

If Los Blancos score in their remaining LaLiga matches against Celta and Malaga, they will achieve the feat.

Looking back, the team that has scored the most goals away from home in LaLiga was the 2014/15 version of Real Madrid under Carlo Ancelotti as coach, when they reached the target of 53.

Zidane's side currently has 52 goals, only one of the record with two matches remaining.

Only Barcelona of 2012/2013 and this season have records similar to that of the current Madrid, as they also reached 52 goals as a visitor.

At the moment, in the current season, Madrid have scored 48 goals at the Estadio Santiago Bernabeu and 52 away from home - indeed, only in the 1930 / 31did they boast a similar record.

Moreover, this year the average rate of scoring in home games is 2.5 goals per game, a figure that rises away from their stadium, reaching 3.05 goals per match.

Cristiano Ronaldo is the top scorer in those 17 games and has netted 11 goals, with Alvaro Morata still at nine, James Rodriguez seven, and Karim Benzema and Isco both with six.

Real Madrid's A-team until the end

There are three 'finals' left for Real Madrid and Zinedine Zidane wil nowl begin to slow down his rotations.

Celta Vigo and Malaga lie in wait in La Liga, while Juventus are the opponents for the Champions League final.

And three wins from three will see history being made.

Given the importance of each fixture, Zidane will attempt to stick to his first-choice line-up when possible.

The Real Madrid 'B team' have blown opponents away in La Liga, often without the likes of Cristiano Ronaldo, Karim Benzema and Luka Modric, although Zidane will return to his 'A team' for the must-win clash in Galicia.

Marco Asensio, Mateo Kovacic, James Rodriguez, Lucas Vazquez and Nacho will miss out on spots in the starting line-up, but remain important players off the bench for Zidane.

Reading edged into the Championship playoff final with a narrow 1-0 home win against Fulham on Tuesday, moving through 2-1 on aggregate.

Reading will face either Sheffield Wednesday or Huddersfield Town in the Wembley final to decide which club joins Newcastle United and Brighton and Hove Albion in the top flight.

Frenchman Kermorgant, 35, coolly fired home from the spot after Fulham center back Tomas Kalas was penalized for handball.

It was his 19th league goal of the season.

Fulham had dominated before the break and Reading were indebted to Oman international keeper Ali Al Habsi who made a fine double save to deny Tom Cairney's curling free kick followed by Sone Aluko's rebound.

He also touched a Ryan Fredericks shot on to the post.
E-mail : [Email protected]
Previous: "Pablo Sabaleta, the heart of a lion" | Next : For the first treble of its history
Views: 5397
- 9670 previous day