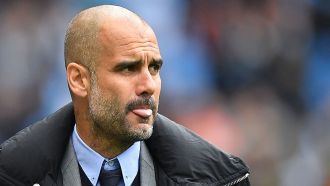 Tuesday, 16 May 2017
Manchester United are said to be targeting James Rodriguez for a potential move this summer and Pep Guardiola claimed that the Real Madrid midfielder has what it takes to qualify for the Premier League.

A standing ovation at the time of his substitution against Sevilla, along with an extended applause from the midfielder towards the Blancos crowd on Sunday, bolstered rumors regarding his future with the Manchester City boss adding his own praise.

"[James] 's quality is beyond any doubt," he said. "He doesn't play for Real Madrid because only his teammates are good.

"All of the best players in the world can play in any league."

Ahead of Pablo Zabaleta's farewell to City fans on Tuesday night, the former Barcelona coach also commented on Argentinian's contribution to the team since his arrival at the Etihad Stadium.

"I have a lot of respect for people who have been in the world of sports for so long," Guardiola added.

"Zabaleta has spent nine years at the club and it's not easy to replace [a player like] him.

"I hope that all our fans will express their gratitude to one of the most important football players in Manchester City's history."

Speculation is growing over the future of James Rodriguez and Real Madrid have named their price as the Colombian pushes for a way out of the Estadio Santiago Bernabeu.

From the early days of being a guaranteed starter under coach Carlo Ancelotti, the attacking midfielder has since fallen out with Rafa Benitez and has been merely a rotation option for current boss Zinedine Zidane.

Cast aside during the Club World Cup in December, James instinctively headed towards the exit but was persuaded by the Frenchman to stay put and work harder, rejecting an offer from Chelsea at the last minute.

However, Rodriguez has only become an integral member of Zidane's LaLiga squad in 2017, and XI infamously made out of fringe players while Isco & Co. get their chance in the huge Champions League games and derbies that James so desperately seeks.

With the 25-year-old now set on leaving, Real have slapped a 75 million euro price tag on his head as the Premier League champions continue to circle, along with rivals Manchester United.

Large parts of the media have already signaled Jose Mourinho's lead in the race for Rodriguez's signature and the player has asked Jorge Mendes to find him a new club, an agent who has long held a strong working relationship with the Portuguese coach.

Whether or not the deal could be impaired by Madrid's chase of David de Gea remains to be seen, but for now Los Blancos are determined not to simply hand over former Monaco man for anything less than what they paid after his sterling showing at the 2014 World Cup.

Scheduled to rejoin training with the group this week, and reappear on Sunday against Malaga, Gareth Bale's absence in Vigo on Wednesday was already a certainty, but now it appears an appearance at La Rosaleda is also in doubt.

On Monday, he continued with his recovery process, but did so alone Real Madrid's training facility, Valdebebas.

The reality is that his main goal is to reach Cardiff, but with three weeks until the Champions League final, he still lacks match sharpness.

Zinedine Zidane and Bale's idea was that the Welshman would have a few minutes in the domestic competition before the great European showpiece, but this is now by no means a given, and the Frenchman has already shown he will take no risks whatsoever in the pursuit of glory.

Even though Zinedine Zidane held out his hand when he subbed off Alvaro Morata against Sevilla, the Spanish international didn’t reciprocate.

It doesn't hurt the striker's best game in truth but he let his anger get the better of him when leaving the pitch with James Rodriguez, a double change for Lucas and Casemiro.

The images from LaSexta's 'Jugones' and the 'Deportes Cuatro' show speak for themselves.

Morata started the game but he can have no complaints about his coach's decision.

Neymar: I dream of winning the Ballon d'Or but I'm in no rush

To win the Ballon d'Or at some point in his career is an ambition of Neymar's, but the Brazilian admits that right now the world No.1 is his Barcelona team-mate, Lionel Messi.

A third-place in 2015 is his best showing to date, and he believes one day he will get to the top - just not yet.

"Every player wants to win the Ballon d'Or," he said to France Football.

"Obviously, I do too, but what I want is to play with the best players in the world, and the best of all is Messi.

"Of course I dream of being the best, but I am calm and in no rush."

Meanwhile, Barcelona's 6-1 victory over Paris Saint-Germain in the Champions League is one of the greatest memories of his career.

Neymar played a leading role in the famous comeback, scoring two and assisting one of the three goals scored in the final ten minutes.

"It is one of the best memories of my career," he added.

"I will remember it for the rest of my life.

"From the final whistle in Paris, I knew it could come back."

Paris St Germain striker Edinson Cavani was named the best Ligue 1 player of the season by his fellow professionals on Monday.

The Uruguay forward has scored 35 league goals in as many appearances this season and PSG are likely to finish second to Monaco in Ligue 1.

Monaco will snatch their first Ligue 1 title since 2000 if they avoid defeat against St Etienne on Wednesday.

Galatasaray target a deal for Negredo

After spending one year on loan at Middlesbrough, Alvaro Negredo is set to return to Valencia although Galatasaray are reportedly keen on his signature.

Despite his nine goals in 35 Premier League matches, the Spanish striker could not help his struggles in avoiding relegation and the Turkish giants are ready to offer 3 million euros in a summer deal.

According to the Turkish daily Milliyet, however, the aforementioned transfer fee does not seem compelling to Los Che and his future is still in doubt ahead of the opening of the transfer window.

Negredo joined the Spanish club back in 2015, after a spell at Manchester City where he managed to lift the Premier League trophy, along with the League Cup in 2014.
E-mail : [Email protected]
Previous: They write history | Next : "Pablo Sabaleta, the heart of a lion"
Views: 5286
- 9438 previous day