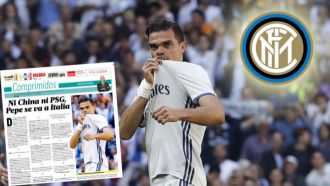 Sunday, 14 May 2017
Though he was close to accepting a tremendous financial offer from Hebei Fortune in China, Real Madrid's Pepe has now decided to join Serie A side Inter.

Teams in France and England were also tempted, with PSG leading the way, but Inter's sporting and economic offer has pleased him.

The deal is close to being finalized with just a few more details to agree upon.

Once done, Pepe will leave Real Madrid where he's been for ten seasons and, for now, won two Champions Leagues.

He will say goodbye to the club after the final Cardiff and will travel to Milan looking to do enough to get himself in the Portugal World Cup squad for Russia 2018.

Sampaoli: Real Madrid are the best team in the world right now

Sevilla visit the Estadio Santiago Bernabeu this weekend with the aim of wrapping up Champions League football for the 2017/18 season, but Jorge Sampaoli is well aware that the match is the toughest his team could possibly face.

Labeling Real Madrid the world's best, he pointed out just how tricky his team found it when they visited the capital in the cup earlier in the season and insisted that they'd have to be at their very best to even stand a chance.

"This past week will have affected them and they'll be in a very positive mood," he said of Real Madrid's Champions League semi-final success.

"Right now, they are the best team in the world, fighting to win LaLiga and the Champions League.

"We will have to have a very good afternoon to take on this opponent of a very high level.

"In Madrid [in the Copa del Rey first leg] we were beaten and we have to learn from that.

"We are making sure that the team can give 100 percent tomorrow, as even more than that will be necessary."

Despite that realism, he promised that his team would compete in order to earn the one final point they needed to seal fourth place, although he denied the LaLiga title race had any influence on Sevilla.

"The satisfaction of winning would be for our own sake and for finishing off a good season," he replied when asked if there would be extra enjoyment from denying Los Blancos the league title.

"If it would be really good if we can play well and if we have the chance to win, but we'd enjoy it for ourselves, not for [what it means for] our opponent.

"We will go there to search for the chance to wrap up our Champions League qualification, no matter who our opponent is."

Sampaoli also discussed the idea of ​​Real Madrid having an A and a B team and pointed out that they are both dangerous for different reasons.

"The less frequent starters play with a lot of hunger and then those that play the Champions League matches have so much stature that they're one of the best teams in the world," the Argentine told reporters.

"There are different plans for facing each team and both are risky."

Finally, he denied that he had been affected about the vacant Barcelona coaching job and also reflected on his fighting injury crisis, confirming that Mariano, Vicente Iborra and Sergio Escudero won't be fit enough and that Vitolo and Adil Rami are doubtful to return to full fitness in time.

In the final of the Champions League, fighting for LaLiga and soon Real Madrid will have another reason to be happy ... Zinedine Zidane will renew with the club until 2020.

That is the aspiration of Florentino Perez and it will become a reality the moment that the Frenchman wants it.

The contract extension, already agreed, is on the table of the Frenchman's office at Valdebebas and once he thinks it will be appropriate, he will sign the document to link him to Real until June 30, 2020.

Complicity and agreement between coach and president is of such caliber that the negotiations are not to be considered as such, but rather working meetings between the pair.

Zidane has always responded with evasiveness to the questions that have been asked about his continuity on the bench because he agrees that it is above an agreement, that contracts must be subject to the successes or failures of the team.

And it's true that Zizou believes it to be a failure not to raise any titles each and every year.

He knows he enjoys the confidence of all around him, but for that reason does not want to relax or think of anything other than pure competition until the last possible moment; June 3 in Cardiff.

Thereafter will be the time when he takes a seat at his table and will initiate the contract.

In the case of Portuguese it was after the conquest of the league in its second year (2012), that the president chose to seal an extension of a contract.

Both president and coach closed the deal weeks ago, but it was announced only when the league was over.

Zidane is happy, he knows how to take the pressure, he knows the wear and tear that he suffers and, in his mind, this will not be a long-term appointment.

Now he feels good, comfortable and has the full confidence of players and the board, key factors for the Frenchman to positively consider his position.

Of course, the financial details of the contract will be adjusted for a coach who, for the moment, has managed to win a Champions League, European Supercup and World Club, and reach another European final.

And they have a League within reach.

And all this within 17 months of his debut on the bench.

In the Champions League final, it won’t just be the trophy on the line but the Ballon d’Or which is likely to be contested between Cristiano Ronaldo and Gianluigi Buffon.

The man who helps lead his side to the trophy in Wales will also be the frontrunner to take the individual honor.

Ronaldo is the clear favorite to win it with bookmakers and Buffon is considered second in running, ahead of Lionel Messi in third, although a Juventus triumph would change that significantly.

Both coaches involved have already weighed in on the debate and Massimiliano Allegri has strongly backed his man to come out on top.

"I think Buffon deserves the Ballon d'Or no matter what happens this year," Allegri said. "I think he deserved it in previous years, when he won the World Cup in 2006."

It was no surprise that Zidane also threw his weight behind his own player to pick up the gong.

"Everyone can think what they want but you already know what I think," was Zidane's response when asked for his opinion.

Former Real Madrid striker Antonio Cassano also sided with his countryman rather than his old club when he was quizzed on his thoughts for the Champions League final.

"I'm going with Juventus and Buffon for the final in Cardiff," the controversial forward added. "He deserves the Ballon d'Or but with Messi, it's always going to be complicated, although I want to say to win regardless."

"If Buffon wins the Champions League, he will be a clear candidate and it would be beautiful for him to win it," confirmed the director of France Football, who oversees the award.
E-mail : [Email protected]
Previous: "Wenger out, it means out." | Next : Second place
Views: 5233
- 9698 previous day