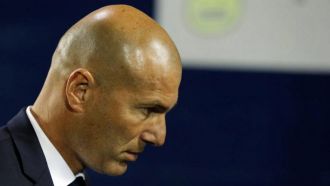 Zidane: I understand why James Rodriguez is annoyed, I have nothing against him

Thursday, 06 April 2017
Real Madrid released their way to a 4-2 win against Leganes in LaLiga on Wednesday night, but the biggest headlines came due to the frustration shown by James Rodriguez, forcing coach Zinedine Zidane to defend his player.

The Colombia international was extremely frustrated at being substituted in the Madrid derby clash, and made no attempts to hide that fact as he made his way to the bench having opened the scoring.

"I haven't spoken with him, it's normal that a player wants to play the full 90 minutes," Zidane told a post-match press conference.

"These are things that happened and that's it. He played well and I am pleased with that. I don't have anything against James, quite the opposite.

"It is true that he isn't on the pitch as much, but he is offensive and works hard.

"It happens with Karim [Benzema] too. I am happy with him and it is normal that he is annoyed to be substituted. I do things for the good of the team, I understand his annoyance but he is going to keep being important. "

Los Blancos conceded twice in the first half against struggling Leganes, but Zidane was pleased with how the game panned out in general, including Marco Asensio's performance.

"We came into the game very well and in two minutes everything changed," the Real boss added.

"It wasn't that we failed, it was a lack of concentration. In the second half, we controlled the game much better.

"[Asensio] had a great game, we all know about its quality. All of the players have it tough.

"We need everyone. You talk about substitutes and starting players, but we are all in the same boat together. It is clear that I am happy, but it is because I have a great squad."

Next up for Los Blancos is the small matter of another local derby, this time against Atletico Madrid at the Estadio Santiago Bernabeu on Saturday.

Asensio: Zidane knows he can count on me

A standout performance from Marco Asensio at Leganes on Wednesday reinforced the youngster's quality in the eyes of many, although he vowed not to kick up a fuss over game time.

Setting up the opening goal and integral throughout Real Madrid's 4-2 win at Estadio Butarque, Asensio was clear that he'll work hard to earn his stripes having almost completed his first season with Los Blancos.

“I know Zidane trusts us,” the midfielder told reporters.

"I only think about Real Madrid and being prepared to give me the best when given the opportunity. I've come to Madrid to fight for my spot and the coach knows he can count on me.

"If we all work as one, we can achieve our objectives."

Also talking to the press post-match was Alvaro Morata and the Spanish forward indicated that he too hasn't come to the Estadio Santiago Bernabeu to moan about not playing every match.

"I have taken two goals, maybe three, I'm sure they'll give me the third in the record books," Morata remarked.

"I am not here to complain, I am here to work and win with the team."

Atletico Madrid represents the next test for Real, on Saturday at the Estadio Santiago Bernabeu.

Morata likely to start against Leganes

Against Alaves, Raphael Varane's injury relapse meant a change in plans for Zidane and the fact that Alvaro Morata didn't play, but that is set to change this time around.

The ex-Juve man is expected to lead the line against Leganes on Wednesday at the Estadio Butarque, another opportunity to try to make his case for more minutes as Karim Benzema continues to put one good performance after another.

All signs point to at least one member of the BBC trio getting some rest, and Cristiano Ronaldo has played more minutes than Benzema and Bale in recent weeks.

The last time Morata started was against Betis, and the striker hardly featured against Athletic Club, so he should be fresh to face Asier Garitano's side.

Navas, Marcelo, and Casemiro are all also likely to make their return to the starting XI.

Sevilla's exertions in trying to keep up in the LaLiga title fight has led to them falling way before the final hurdle, in the eyes of coach Jorge Sampaoli.

Dropping into fourth place after a 3-0 defeat at Barcelona, Los Nervionenses' rut has served as a dramatic down note in a promising season that also saw them reach the Champions League last-16.

"Fighting alongside Madrid and Barcelona has cost us," the Argentine told the assembled press.

"There's an outstanding debt that we will have to solve soon.

"Dropping out of the Champions League was a very big blow, and in LaLiga we had to play Atletico Madrid too soon after. We have to believe again."

In his assessment of the game, the Argentine accepted that the Catalans were gifted two goals by Sevilla, who he believed deserved a consolation for their late improvements.

"Beyond Barcelona's domination, we gave away two goals on the counter," Sampaoli continued.

"Our plan was to defend with the ball at our feet, but if Barcelona forces you into these situations, you pay. In the second half, we deserved something more."

Next up for Sevilla is a home game against Deportivo La Coruna as they look to close the three-point gap on third placed Atletico Madrid.

Iniesta: Winning at the Bernabeu key to Barcelona's title hopes

Barcelona's 3-0 win over Sevilla may have kept the LaLiga title race alive but Andres Iniesta feels his side have to beat Real Madrid at the Estadio Santiago Bernabeu to retain their crown.

Just eight games remain for the Blaugrana to overturn the two point deficit atop the table with Los Blancos also possessing a game in hand.

"We lost to Deportivo and they drew at home to Las Palmas but if we want to have a chance of winning the league, we probably need to beat them at the Bernabeu," he said after Wednesday's game.

Starting the stroll past Sevilla, Iniesta's presence was a big factor in the win and it came after a spell of rest that the midfielder didn't necessarily enjoy.

"The bad moment has already passed and I am happy with the team and myself," Iniesta noted.

"It's been a little strange this season because of some things and others, but the present is what it is. I hope to play like this in the remaining games.

"It's never easy to manage an international break because you change the tempo, but the team is good and we are in the loop this April.

"We are in every competition and we could end up in nothing if we don't do things right."

Before Barcelona can concentrate too hard on the Clasico, Malaga await them in LaLiga on Sunday night at 20:45 CET.

Pique suspension concernses his presence in the Clasico

Timely suspensions are nothing new for any team but Barcelona have indulged in yet another ahead of the Clasico as Gerard Pique gets his fifth booking out the way with time to spare.

Going into Wednesday's match with Sevilla on four bookings, the center-back wiped out Joaquin Correa after just 15 minutes to accrue a one-game ban that will occur against Malaga this weekend.

That should leave the defender free to play on April 23 when the Blaugrana travel to Real Madrid, as well as the preceding fixture versus Real Sociedad, barring any injuries or further bans.

After a slim 1-0 victory over Real Sociedad, Atletico Madrid coach Diego Simeone decided to give his starters the day off to recover, with an eye on Saturday afternoon's big match against Real Madrid.

That meant that only five first squad players participated in Wednesday morning's session, while the injured contingent completed their recovery sessions separate from the rest of their teammates.