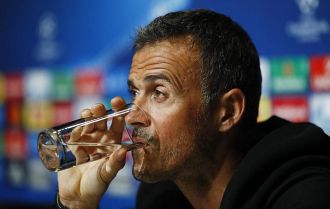 Luis Enrique: Aguero will not force a change in Barcelona's approach

Tuesday, 01 November 2016
The presence of Sergio Aguero in the Manchester City line-up on Tuesday night does not frighten Barcelona coach Luis Enrique.

Dropped for the Champions League fixture at the Camp Nou just weeks ago, the Argentine will now play from the start in midweek having bagged a brace against West Brom on Saturday.

"The game doesn't change at all just because they'll play Aguero," insisted the Spaniard to reporters. "We all know about him, how often he scores, but the overall game is the same and we won't stress over it."

That said, Luis Enrique believes whatever side Pep Guardiola deploys at the Etihad Stadium will be a tough test for his Barcelona XI.

"We'll have to play very well to win," he added.

"We'll have to be equally effective with and without the ball, which is very difficult against a team like City."

Kicking off at 20:45 CET, the Blaugrana went into the Group C game with a 100 percent record in the tournament.

Guardiola: It's a final for Manchester City but not for Barcelona

Ahead of Manchester City's Champions League clash with Barcelona, coach Pep Guardiola insisted that the tie is a bigger deal for his side than for the visitors.

Lionel Messi's hat-trick inspired the Catalans to stunning 4-0 victory at the Camp Nou two weeks ago but the Argentine's former boss insists his side will be coming into the match with confidence after winning 4-0 at West Brom on Saturday.

"Our confidence is much higher, but the Champions League is a different competition, it's much shorter and we need to do it against the best sides."

The manner of the scoreline in the first leg left the City coach to concede that some of his players may have been overawed.

"For some of our players, it was their first time at the Camp Nou, but they competed well."

The former Bayern Munich boss has seen four of his players sent off in five matches against Barcelona, ​​and losing a man makes a victory an almost impossible task.

"It's always difficult to beat them with 11 - but even harder with ten," he added.

"Willy [Caballero, who will replace suspended Claudio Bravo] has helped me a lot and he was very important at the beginning for me.

"I hold him in high regard as a person.

"He has always played well for me and I have a lot of confidence in him."

Sergio Aguero was surprisingly dropped for the first game, and Guardiola's goal is to make him a better player.

"I want to help Aguero improve his level," he said.

"I could never ask him what Luis Suarez does, for example, that would be unfair, but I want to help my players progress."

There may once again be room for Pep Guardiola at Barcelona according to club president Josep Maria Bartomeu, who simply cannot dismiss the notion of coach returning to Catalunya.

Now four months into helming his second club after leaving the Blaugrana, having taken charge of Bayern Munich for three seasons, the Manchester City boss' short-term focus is facing his old team in the Champions League.

"I knew he wanted to go [to England] as a player," Bartomeu said in an interview with the Daily Telegraph.

"He couldn't do that but now he's a manager. So it's normal that he went to the Premier League and I hope that one day he will be back here.

"You never know. There are so many people who were at the club, went, came back again. You never know but right now he is concentrating on City.

Also up for discussion with the 53-year-old, who revealed that 11 Camp Nou season tickets have been shared between his family for generations, are contract operations for Lionel Messi.

"[Talks will start] in the next couple of months," Bartomeu added.

"[I'm] not annoyed. This is a decision for Messi or for any player to change club. Right now he has a contract to the end of the Russian World Cup [in 2018] and we are very happy with him.

"Normally players increase and then decrease but he is still growing. So where are the limits? We don't know."

Are Manchester United fans planning a protest against Mourinho?

There's a possibility that Manchester United fans are already sick of Jose Mourinho.

Sitting eight points off the top of the Premier League table, the Red Devils have suffered big defeats to Chelsea and Watford as well as weak draws at home to Burnley and Stoke City.

In response, Twitter account Get Mourinho Out has caught the eye with a series of 'planned protests' to inspire the Portuguese coach's sacking.

However, whether this is indicative of the wider mood of supporters is very doubtful, in spite of the account's growing follower base.

Past social media campaigns on this nature have often turned out to be a simple parody or joke, with some even acting as a facade for a backfiring advertising campaign.

In any case, there has been a strong rebuttal to any support for Mourinho's dismissal, showing a possible split among the Old Trafford faithful.

Ever the globetrotter, Pep Guardiola has thrown himself in Lancashire living by living out of the city center and visiting many local establishments.

While Jose Mourinho restricts himself to the confines of his Lowry hotel room, the Manchester City boss has been spotted out and about in a number of places.

According to Deportes Cuatro, Guardiola has been ordering churros, lattes, and seafood spaghettis in Tapas and San Marco, two of its local dining options.

In addition, the ex-Barcelona boss is happy to stop for photos and autographs as he passes through the Manchester streets, fully taking care of his new home even if his menu choices can hardly be considered Lancastrian.

The northern city is just another for the coach to add to the list of interesting places he's called home; including Barcelona, ​​Munich, Brescia, and New York.