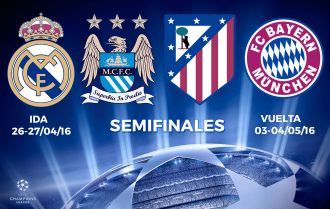 Παρασκευή, 15 Απριλίου 2016
It would be unthinkable to have a Champions League draw with more of a sense of morbid curiosity, than the one which takes place on Thursday at midday.

Real Madrid, Atletico Madrid, Manchester City and Bayern Munich are waiting to find out their opponents for the semi-final stages, which will result in games which will be breathtaking to even think about.

Whatever happens, both ties will have their attractions. Real Madrid, for example, could cross paths of local rivals Atletico once again, who knocked them out of the Champions League last year - but who have been incapable of beating them this season in La Liga.

Sergio Ramos' 93rd-minute goal in the Lisbon final is another memory shared by the two, with Diego Simeone looking to improve upon the achievements of the squad he crafted two years.

There would also be a lot to talk about if Real Madrid crossed paths with Manuel Pellegrini's Manchester City, who left the club in poor fashion and has since criticised president Florentino Perez.

Pep Guardiola could look for revenge against Madrid too, after the Champions League semi-final defeat at the hands of Los Blancos two years ago. This time, however, Xabi Alonso will be on the opposite bench.

It would be more awkward for Pep to come up against Manchester City, however, with the former Barcelona coach having already confirmed that he will be managing the English club next season. It would seem like a dirty trick on the Spanish coach if he had to meet his future employers prematurely.

If Man City draw Atletico, there would also be some potential ill-feeling. The tie would constitute Sergio Aguero's return to Estadio Vicente Calderon, after his controversial exit from the club five years ago - which would undoubtedly be very special.

Finally, if Atletico were to come up against Bayern, it would be the eventual opportunity for Los Colchoneros to avenge the defeat to the German club in the European Cup of 1974.

Following Atletico Madrid's progression to the Champions League semi-finals, the Diego Simeone has gathered more and more supporters as his philosophy continues to flourish at the club.

More than a football coach, he has become the leader of an army. They are 11 on the field, and 50,000 in the stands. Simeone is the director.

Unlike most of Europe's top clubs who to propel themselves in to the elite by spending huge sums of cash, Atletico Madrid have found a more refreshing alternative. Far from relying on financial muscle, they have shown that footballing feats can still be achieved through togetherness, belief and desire.

Victory against Barcelona on Wednesday prevented a semi-final lineup dominated by the richest teams. Had Barcelona progressed, four of the top five richest clubs in Europe would have been in the semi-finals.

Simeone's passion on the touchline sets the standard for the rest of the team. The blend of work-rate and ability his side possess is a winning formula. His accomplishments are so far even more impressive when you consider the relative inexperience of his players.

Real Madrid's starting 11 on Tuesday had 719 Champions League caps between them, Manchester City had 438, and there were 609 for German champions Bayern Munich. Atletico had just 202.

Simeone's side play every game with passion fit for a World Cup Final, and their determination is unrelenting. Football fans will revel Atletico Madrid's evolution just as much as they will laud Leicester City's Premier League campaign.

And all for Cholo. The man who has defied his rivals and built an army. Many great managers have come before him, but Simeone is proving that he is ready to surpass them all.

very smart." The midfielder claims he was misinterpreted, however, and wants to clarify what he really meant.

"I did not say that Ronaldo isn't very smart, what I really meant was lost in translation," said Xavi in an interview with Movistar+.

"There are two kinds of speed in football: the physical one and the one that determines how fast you can combine with a teammate. That's why I said that Lionel Messi is a better player, because he has those two speeds. But I never said that Cristiano Ronaldo isn't smart, not at all."

Xavi is still playing football for Al Sadd, but is also considering what the future holds for him when he hangs up his boots.

"Coaching is something you have to feel and I am starting to feel it right now because I love being out there on the pitch. But right now I am still active."

Xavi added that he still has "the same competitive spirit no matter where I'm playing [Qatar or Barcelona]."

He also spoke about Barcelona and their opponents, explaining that he considers his former side "the best team in the world."

"I miss being there, the jokes, the training sessions and just how good they are. They are the world's best team and only Bayern Munich can come close," he said, before adding that what Atletico are doing this season "is impressive because Barcelona and Madrid are ahead financially."

Spain will face Euro 2016 without Xavi, who has been one of their key players. Nevertheless, he is confident they will do well in his absence, "They are very good in every position. The group they drew is not an easy one but they will do well because they have a coach who knows the group".

Atletico and Real dominate UEFA team of the week

UEFA published their team of the week on Thursday, following this week's Champions League quarter-finals, and players from Atletico Madrid and Real Madrid were the main inclusions.

All eleven players were picked from the sides which successfully made their way into the semi-finals: the two Spanish sides, plus Bayern Munich and Manchester City.

There are no surprises here, as Griezmann's two goals on Wednesday evening knocked out Barcelona, while Ronaldo scored a stunning hat-trick against Wolfsburg.

Elsewhere, Joe Hart, Nicolas Otamendi and Kevin De Bruyne were chosen from Manchester City, with the Belgian midfielder's goal enough to send the English side through against Paris Saint Germain.

Meanwhile, the remaining player is Arturo Vidal, who scored for Bayern against Benfica in his side's 2-2 draw on Tuesday evening.

Many have commented on Lionel Messi's recent slump in form, but his club Barcelona have said that he has been receiving treatment for muscle pains in recent weeks.

Until now the club have not confirmed the news, but now they say that this problem has been going on since just before his most recent international break with Argentina.

In fact, he has been attended by his trusted Italian physician, Doctor Poser. This is the same doctor that advised him on his special diet.

It's clear that the league leaders' talisman has not quite been up to it during these games, failing to hit the net in five, his longest barren stretch since 2010.

While it has been acknowledged that the aches had subsided to a certain extent in recent days, the annoyance remains.

Both Messi and Barcelona manager Luis Enrique have been unwilling to curtail his involvement during a rigorous and crucial part of the season, both on the Champions League and domestic fronts.