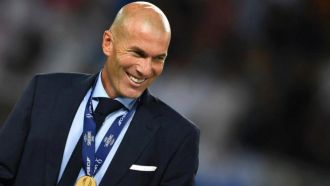 Zidane: This team is hungry and it always wants more

After another job well done, Zinedine Zidane can rightly bask in the glory of Real Madrid's most recent title triumph, this time a 2-1 victory over Manchester United in the European Super Cup, a match where his players showed their hunger again.

It was suggested by reporters after the game that Real play better under new systems and lots of evolution.

"It's not an evolution, it's just a question of work," Zidane said in response.

"We have lots of talented players who work hard, and we can win lots of things with the players that are hungry and want to win.

"The match was almost perfect, we suffered a bit in the second half, but that is normal.

"A third goal from Gareth Bale would have killed the game off, but we have character, which is why we win."

It's now 66 straight games in which Real have scored and they're looking invincible already.

"We know we will have good opponents throughout the season starting on Sunday [against Barcelona]," Zidane continued.

"We want to prepare well and do things perfectly, do things better compared to what we did in the last three or four games."

Spanish dominance in European competition is showing no sign of ending, a fact not lost on the Frenchman.

"There are many teams who can make things hard, but what we want is to keep going how we are, trying to win every game," Zidane said.

"There are lots of teams who can beat us, and this is what happens all year.

"The season is long and hard, and this season will be more difficult for us, but we still have the desire to continue as we are."

Florentino Perez: I don't contemplate selling Bale as he's very important for us

Despite rumours linking Gareth Bale with a move to Real Madrid's opponents on Tuesday night, Manchester United, Los Blancos president, Florentino Perez, suggested that the Welshman would be staying in the Spanish capital.

He also had words for those supporters who were already dreaming of emulating Barcelona's sextuple.

"Every win is important to us, but we're going step by step," Perez said to reporters after the game.

"I don't contemplate selling Bale, he's important for us and is one of the best in the world.

"We have great players and my idea and Zidane's after winning the Champions League was to do nothing and stay with the same team."

Barcelona are next up for Real, in a two-legged Spanish Super Cup final.

"They have a great team and they are going to be two very difficult matches," Perez continued.

"We will try to win in the same way as we did today [Tuesday]."

Mourinho had said on the eve of the contest between the Champions League and Europa League holders that he would "fight with other clubs" to sign Bale if he did not start the game in Skopje and appeared not to be in coach Zinedine Zidane's plans.

"Clearly the club wants him, the manager wants him and he wants the club so clearly game over, before it had even started, as everybody knows he is going to stay," Mourinho told BT Sport.

Real president Florentino Perez also ruled out selling the player he brought to the Santiago Bernabeu in 2013 for a then world record fee of 85.5 million pounds ($111 million).

"I can't contemplate selling him, he's a Real Madrid player, he's important to us and he's one of the best in the world," the Madrid chief told reporters.

Bale started up front alongside Karim Benzema in the absence of Cristiano Ronaldo and laid on the pass for Isco to net Real's second goal. He narrowly missed out on scoring himself as he thundered a shot against the bar later in the second half.

"I'm not reading anything, although people tell me bits and bobs. I'm enjoying my football and playing as much as a I can and winning trophies," added Bale, who collected his sixth European medal with Real since his move from Tottenham Hotspur.

"It is obviously great to keep adding to the trophy collection. It was a difficult game but I think we played well and controlled the game very well. We want to keep winning and every game we still have the hunger and desire."

Despite United spending large periods on the back foot against Real, Mourinho took encouragement from the way his side came back from two goals down to set up a tight finish after Romelu Lukaku reduced the deficit just past the hour.

He also bemoaned the lack of a video assistant referee (VAR) as he criticised the decision to allow Casemiro's 24th minute opener to stand, although replays showed the Brazilian's body was broadly in line with United defender Chris Smalling.

"I think we did well, I think we lost to one goal which shows the result was really short (tight) and one of their goals was an offside. With a good VAR system it would be 1-1 and extra time," added the Portuguese coach, who has still yet to win the European Super Cup after three attempts.

"We were playing a team full of fantastic players but we discussed (contested) the result until almost the end. We gave them a fight but have reasons to leave optimistic and proud."

After his latest triumph at the Phillip II stadium in Skopje, Zinedine Zidane is making history as coach of Real Madrid following his illustrious playing career with the club.

In less than two years, the Frenchman has already written his name in the team's glorious record-books following the capture of six titles, which makes him the fourth best in Los Blancos history.

With two Champions League titles, two European Super Cups, one LaLiga and a Club World Cup, he is just one achievement away from Vicente del Bosque who has seven trophies.

Furthermore, the 45-year-old is only two away from Luis Molowny's accomplishments and a little further away from Miguel Munoz who boasts an impressive 14, yet Zidane's journey at the Estadio Santiago Bernabeu is just beginning.

Amongst other feats, the former World Cup winner is only the second coach to win the European Super Cup in two consecutive seasons, following Arrigo Sacchi in 1990.

Following Neymar's record-breaking move to Paris Saint-Germain, Barcelona club legend Ronaldinho has shared his view on the transfer between his two former clubs.

The 37-year-old welcomed his fellow countrymen to the Ligue 1 side, expressing that his happiness is vital.

"For me, the important thing is that he feels comfortable where he is," said Ronaldinho to PSG's official website.

Amongst the controversy surrounding the huge deal, the World Cup winner believes it was the right move for the 25-year-old forward.

"He gives joy to all those who love football, I'm happy for him," said the former Ballon d'Or winner.

Further ex-Brazilian stars at the Parisian club also passed comment on the move, including former centre-back Alex, who believes the South American contingency is important.

"He is very close to Marquinhos, Thiago Silva, Maxwell and especially to Dani Alves," said the 35-year-old, before adding "their presence is definitely very important."

Email : [email protected]
Προηγούμενο : Zidane: "Cristiano is with us and he is here to play" | Επόμενο : Coutinho and Dembele: Situation critical
Προβολές : 759
- 5420 προηγούμενη ημέρα