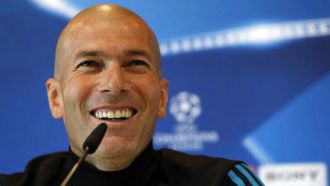 Zidane: As Isco said, I have to make the tough decisions

Real Madrid have a fully fit and healthy squad for the Champions League final against Liverpool, which is obviously a positive, but which leaves Zinedine Zidane with a very tough team selection.

The French coach will have to leave some very talented players out and, as Isco recently said, his task is not an enviable one.

During Friday's pre-match press conference Zidane was asked if those who are left out will see themselves as less brilliant, but he didn't think they would.

"No! We shouldn't think that way," he replied.

"As Isco said, it isn't nice, but I have to take those decisions as a coach.

"All those players are very good, but we have a team philosophy.

"Players might be disappointed, but when the match starts they know they are part of the team.

"There will always be players who have to sit on the bench, but they also contribute to the team, and that is important.

"This is the worst moment for a coach, especially when in a final, as some players won't even put a jersey on.

"But players know that.

"It is my responsibility and I have to understand that it is my job as well."

Zidane should be well used to this by now given that this is his third Champions League final as a coach and he was asked for his secret.

"A lot of hard work and a lot of talent," he said.

"To reach a final is not easy.

"At the same time, we are delighted to be in another final.

"I am a competitor and I like to compete.

"There is a lot of hard work behind it.

"If you like to complete and work hard, you can achieve what we are doing.

"This is a normal thing for me."

Zidane also explained that he felt this match against Liverpool was evenly balanced and dismissed the notion that Los Blancos are favourites.

"But we have to play a great match to win.

"We aren't favourites of anything.

"In football, it is very simple in football.

"When you have the ball, with your game, you have to try and hurt your opponent.

"We have had difficult moments in matches, and we will tomorrow.

"We will try to stop them tomorrow, and then give them difficult moments."

Overall, though, Zidane was in a relaxed mood and denied that he'd be suffering the night before the match.

"I'm not suffering today, as always just before a match we are delighted to be here," he said.

"This moment we will not live again, we will be there to live other things in football.

"So, clearly we have to make the most of it.

"If I'm under a little pressure, this is life and that is being a human, and so what, all the better.

"What is important for me it to do a great job and give my all.

"I tell my players to give their all, and if you have done your best and not gotten what you wanted, then that is out of your control."

Speaking about his opposite number Jurgen Klopp, the Frenchman was asked how they are different and he joked about their different playing careers.

"I was a little better than he was as a player, but as a coach I have a lot of respect for him," Zidane said.

"He has a lot of experience, and what he has done in football is fantastic.

"He has been phenomenal.

"We don't share too much in common as every coach is very different."

Of course, Cristiano Ronaldo is expected to play a major role and Zidane offered a fitness update on his star man, not long after saying the No.7 would be 150 percent.

"He is doing great, and if is he has 149 percent then that is great too," the coach said.

"This is our last game of the season and he lives to play these matches, it's what makes him tick."

Klopp: I can see the anger on Zidane's face when you ask if he's hungry

Liverpool are out to deny Real Madrid a third consecutive Champions League crown on Saturday and Jurgen Klopp knows that his opposite number, Zinedine Zidane, is as desperate to win this trophy as he was the previous two.

Asked why some critics believe the Frenchman to have an inferior tactical mind, Klopp defended Zidane and praised the way Los Blancos are set up.

"If people think Zidane doesn't have knowledge, a lot of people think that about me too," the German told reporters. "And it would be funny if two coaches who didn't know about tactics are in the Champions League final.

"What does that say about the game? Zidane was one of the best five players ever to play football, and in three years, where I've been at Liverpool and he at Real Madrid, he has the chance to win the Champions League for a third time, which hasn't been done before.

"Either way he is brilliant, like he was as a player, and the group of players he has work like a clock from Switzerland. I've seen his team play a lot and they play fantastic football. At moments it is organised when it needs to be, and it is chaos when it needs to be.

"They are all world class players, but it is football, so there is an opportunity for the other team as well. Zidane was always a fighter, when he grew up at Marseille, and in his career you need to be a fighter, and as a player he was so much better than everyone else, but he was still a fighter.

"I saw his face when someone asked him about the hunger of us and Real Madrid and the guy who asked the question made him angry. We have different lives and we have to do what we are paid for."

While Zidane is preparing for his third such final, for Klopp this is his second Champions League showdown having lost to Bayern Munich in the 2013 clash while boss of Borussia Dortmund.

"It is a massive difference [from then to now]," he continued. "The Champions League final is really big, as a manager you have lots to do, and for the preparation for the match, but mostly things like being cool and convinced and calm.

"I was much more excited that time with Dortmund, I never thought good things like that would happen to me and getting to the Champions League is hard, it felt like a once in a lifetime chance and we played a great game.

"After that I knew I wanted to get back to that again, it took a while, but I am here because the players have given me the chance again. The players deserve it and and I'm really proud of them."

The German was also queried on how Mohamed Salah is observing the Islamic event of Ramadan, which the winger is said to be interrupting to maximise his preparation for the final.

"Religion is private and I have nothing to say," stated Klopp. "He will be fine though, he is full of power.

"No manager is interested in any comparisons with [Lionel] Messi or [Cristiano] Ronaldo. They deserve all their praise and are at an amazing level, and we will see if Salah can get there, he has fantastic potential.

"This season he was exceptional, and we have one game to go but nevertheless, this season was outstanding, and in the next few years will see if he can do something more. Those two - Messi and Ronaldo - are the most consistent over the last 10 years, and performed as such a high level."

Directly comparing the two teams ahead of Saturday's game is also of no interest to Klopp, with Real's squad seemingly possessing much more depth than he has at his disposal.

"That is what we've done all season, we have great quality on the bench," noted the coach. "It isn't about comparing, we are fine with what we have, we have the best bench we have had for weeks due to players coming back from injury.

"So we are in a better position than weeks ago. We haven't had chances to change recently. We are as fresh as can be after these two weeks. Playing a final and winning a final, teams have needed luck.

"We need to be ready for any challenged in a game. we really are fine with our tools, with the things we have. Maybe a few clubs have better, but they aren't in the final. We did it our way and we want to do it our way again."