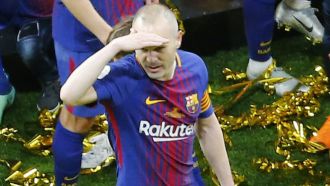 Ernesto Valverde secured his first trophy as Barcelona coach with a comprehensive 5-0 victory over Sevilla, yet it was Andres Iniesta who took the headlines with a quite expert performance proving that retirement isn't on the agenda for the midfielder.

With it expected that the 33-year-old will head to Chongqing at the end of the season, the Blaugrana captain put in a near perfect performance that epitomised everything positive about his illustrious career with the Catalan giants.

He rounded it off with an incredibly well taken goal, just his second in a cup final over the course of his career, despite taking the ball round David Soria, he still was able to place the ball into the net from the tightest of angles.

Jasper Cillessen showed why it is important for goalkeepers today to be good with their feet. He was excellent in the build up for the second goal by Barcelona as he stopped Sevilla's pressure with a 50 yard pass that any of his teammates would have been proud of.

Jordi Alba is defender who can play as a striker and his contribution going forward is a big help for the team. In particular he links up well with Lionel Messi and he provided an assist for the Argentine to get the second goal.

Luis Suarez rediscovered his eye for a goal with a double against Sevilla. He was lethal with the ball at his feet and it is a shame for Barcelona that he wasn't so dangerous in the Champions League.

It is the fourth time that Sevilla have conceded five goals since Vincenzo Montella arrived and his tactics failed from the start. There was a big difference between the sides and now the team is also struggling to get in Europe next season.

Sergio Busquets produced another consistent display in midfield where he was crucial in the build up play. Still he made a poor challenge on Mudo Vazquez that could have seen him sent off.

Iniesta's father: He has a difficult decision, it would be a good moment to leave

Barcelona celebrated winning their 30th Copa del Rey on Saturday evening and Andres Iniesta's father, Jose Antonio said afterwards that it would be difficult for him to leave but this would be a good time.

Chongqing is the expected destination for the veteran midfielder should he leave the Blaugrana at the end of the season, although nothing has been confirmed officially.

"He's going to make a difficult decision," he explained in an interview with Cadena SER.

"If he chooses to leave then you have to respect it.

"I think it's a good time for him to take such a tough step and he intends to announce his decision next week."

If Saturday's trip does indeed turn out to be Iniesta's final cup final with Los Cules, then the veteran has signed off in perfect style by scoring a wonderful goal.

"It's good for him to score his first goal in a Copa del Rey final," he admitted.

"Now the match is over, I'm calmer.

"My son has done well, he's played in his style."

In what was a fitting tribute for a player who has given so much to Spanish football over the course of his career, both sets of supporters gave the La Masia graduate a standing ovation when he was substituted, a move which pleased his father.

"Listening to the ovation they have given Andres brought me to tears," he admitted.

Valverde: We played without thinking of what happened against Roma

Barcelona appeared to show extra determination to shine as they racked up a 5-0 victory over Sevilla but Ernesto Valverde denied it had anything to do with the way they crashed out of Europe at the hands of Roma.

The Catalan side are now set to win the double this season but the way they were knocked out of the Champions League left many at the club unhappy.

"Each competition is an opportunity and we had the chance to play a final without thinking about what had happened before," said Valverde.

"Clearly how we lost against Roma left an impact and today we have been better from the start. The idea was to win today and now we need to rubber stamp winning the league.

"I feel fine, when you lose in a compeititon with a big club there are always repercussions and not just small issues that would be the case elsewhere. This happened in the Super Cup and the Champions League for the way we were beaten.

"We were anxious to win something to show that we are fine."

Valverde was pleased with the way the team played.

"We knew what we were up against and we went out with a lot of determination," he continued.

"We got the first goal and then we were able to cope with their pressure quite easily."

Bartomeu: Winning the double would be historic, we haven't done it many times

Barcelona president Josep Maria Bartomeu highlighted the achievement of winning a double and said it would be a historic achievement.

Ernesto Valverde has come in for significant criticism following the Blaugrana's disastrous Champions League defeat to Roma, although winning his first trophy as the club's coach has certainly improved the mood around the Camp Nou.

"Winning the double would be historic because we haven't experienced that too many times," he explained in an interview post-match.

"Everyone who has watched today's match has enjoyed it, we haven't seen our team play at such a high level for a long time.

"If we win the league it would be an excellent year, we hope to secure the LaLiga title as soon as possible."

Sevilla were never really in the match, Los Cules steamrolled their opponents with Lionel Messi and Luis Suarez in full flow, it was a result which left the club president delighted.

"We played a fantastic match," he intimated.

"This is a good cup triumph for us, we're very happy to see how the match went.

"We saw the best team in the world play football, Sevilla are a worthy adversary but they could do nothing against our team."

Andres Iniesta was given a fitting farewell when he was substituted with just four minutes left to play, with it expected this will be his final season with Barcelona both sets of supporters showed their respect with a standing ovation.

Despite the occasion, Iniesta played almost perfectly, scoring a quite majestic goal in the process, and whilst there has been no official announcement on his future as yet, Bartomeu believes the 33-year-old has earned the right to decide when he moves on.

"Iniesta was crying because he's happy, he has a contract for life and will conclude it whenever he wants to," he confirmed.

"He's been playing very well for many years, but he also marks a period of great success for our club, he's unique.

"Barcelona is the team of his life, he arrived as a 12 year old and this team has given him everything, you'll have to ask him if he's going to leave."