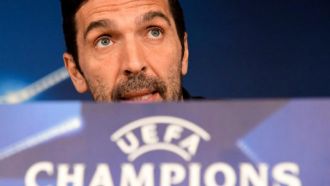 Buffon: Cristiano Ronaldo is the most decisive player in the world right now

Real Madrid earned a very impressive 3-0 victory away at Juventus in the first leg of their quarter-final tie thanks to two goals from Cristiano Ronaldo, who Gianluigi Buffon praised ahead of the second leg.

The veteran goalkeeper explained that the No.7 is consistent and so important for his team.

"I don't know if he is the most complete player, because I've faced some great footballers in all these years, but right now for his position he is the most decisive," Buffon said in Tuesday's pre-match press conference.

"I have no doubts about that.

"He is consistent and always scores goals."

Discussing the tie and Juventus' chances of mounting a comeback, the goalkeeper was realistic without being defeatist.

"We'll have the same mentality as always with the objective of obtaining the best result possible," he said.

"It is a match which should be honoured, both because of the rival and the setting.

"I remember some incredible comebacks and one must try the impossible to dream."

Asked if this would be his final Champions League game, Buffon didn't want to predict the future.

"It's possible, but it doesn't depress me," he said.

"When I was a kid I'd have signed up to do what I've done and to have my final game at the [Estadio Santiago] Bernabeu.

"I'll look at the positive side of the situation.

"The important thing is that this doesn't end up being Juventus' last game in this year's Champions League."

With two Champions League titles under his belt but only one for LaLiga, Zinedine Zidane is at a loss as to why his Real Madrid side are so much more prolific in Europe than at home.

Wednesday's match against Juventus presents Los Blancos with a chance to step closer towards a third consecutive Champions League crown under the Frenchman, whereas his side are cut adrift in their attempts to win him a second league title.

"I don't have an explanation," admitted Zidane on Tuesday.

"We want to win everything. But sometimes, like this year, our consistency hasn't been very good.

"We had a difficult time, especially when it came to scoring. Now we are better in every aspect.

"But it has no explanation. It makes me more excited to win the league, that is the hardest thing and I also think that is what the players want.

"In the Champions League, when you look at the history of the club, you see that nobody has matched us."

The main injury worry for Madrid is that of Jesus Vallejo, who retured to training on Tuesday ahead of potentially filling in for the absent defensive duo of Sergio Ramos and Nacho Fernandez.

"Jesus had a good workout, nothing has recurred," Zidane noted.

"We don't have any problems. If we have a problem we will adapt."

Going into the second leg as clear favourites, thanks to their 3-0 win in Turin, Zidane fears complacency and believes any other approach would lack respect.

"It bothers me because the best thing is to not talk about [being favourites]," confessed the coach.

"What I am interested in is showing up on the pitch, not talking. We have to respect all teams.

"For example, the other day, with the match we played against Atletico Madrid, we could have lost.

"I have no explanation, that is football. The big clubs never give up, they can survive everything."

Karim Benzema is another man likely to play a part on Wednesday and the Blancos boss admitted there are doubts in the striker's mind at this moment in time.

"I think he is doing as he usually is," stated Zidane.

"He says that he is suffering a bit and he would also like to score more goals.

"He is training well with his colleagues and is concentrated.Otherwise, he would like to score more and be better."

Naturally, Cristiano Ronaldo will start at Estadio Santiago Bernabeu and Zidane spoke of how the winger will be remembered at Real Madrid in the same light as the legendary Alfredo Di Stefano.

"I don't think about playing without Cristiano," asserted the Frenchman. "We have him and we are happy with what he does.

"We have him and we have to take advantage of that."

I do not believe that Pep Guardiola is a failure by any means, in fact the opposite, he is a winner as everyone, more or less realises.

Mixing politics and sports should not happen but at the same time I admire sportsmen who hold firm ideas and even more if they are ready to proclaim them.

He is now a standard-bearer of the nationalism movement after a long journey and now his position of leader of the oppressed is overtaking him where he mixing the legal with the illegal, democracy with totalitarianism and violence with pacificism.

Pep is treating people like sheep. As a coach he is the most seducive, his Barcelona irrepitable and will form part of the history of football but to be so great as the leader of the independent movement was difficult.

He has now been knocked out of the Champions League and while the 3-0 defeat away to Liverpool would normally suggest they had little chance, the quality of City's football this season gave room for belief.

City did their best at home under their motto of possession football but Liverpool won and Pep was sent off.

Last year Guardiola asked for time when they were knocked out by Monaco, he could be given the benefit of the doubt with the club not having a European tradition and he had been incharge for little time.

This year there is more room to excuse him despite the money spent after a magnificent run in the Premier League which will give them the title soon.

In Germany it was a similar situation with the team dominating and even some of his most faithful supporters saying that he changed German football but in Europe it was more frustration.

In the end Guardiola has triumphed in Europe with Messi and without him it has been a lot more difficult. In fact there have been failures to greater or lesser extent against teams like Bayern and City. Guardiola did not invent football, it is down to players what happens and each time only one coach can come out on top.