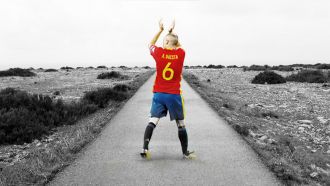 Julen Lopetegui has been able to count on Andres Iniesta throughout his tenure as national coach, and ahead of the World Cup in Russia, the veteran midfielder may well be looking at the start of his international countdown.

At the very most, there are 10 matches left for the Spanish team if they are to reach the showpiece in Moscow, and it seems unlikely that Iniesta will continue on after the tournament.

Prior to the tournament, there are three pencilled in friendly matches against Argentina, Switzerland and Tunisia.

In the group stage, La Roja will take on Portugal, Iran and Morocco, meaning there are a minimum of six matches left for the Barcelona midfielder to take part in.

There is one instance where the 33-year-old's international calendar could be disrupted, and that's if the Blaugrana are to reach the Champions League final on May 26.

Should they do so, that would mean he wouldn't be available for the June 3 friendly against the Swiss team.

The entire Premier League has been left stunned by the impact Mohamed Salah has made in the division since his arrival at Anfield in the summer, however Liverpool now wish to keep him by offering him a 13 million euro annual contract.

Salah is the current leading scorer in the Premier League with a tally of 28 goals, and it's exactly this form which has seen the former Roma forward linked with a move to LaLiga.

The Merseyside club are acutely aware of just how alluring advances from Spain can be for players, and are determined not to lose Salah like they lost Luis Suarez and Philippe Coutinho.

Manchester City hold a clear financial advantage over every single other club in England's top flight, and whilst Liverpool have often lagged behind in recent years, a report in the Daily Mail suggests the club are willing to offer the forward a weekly salary of 229,000 euros.

Such a contract would place him amongst the very highest earnest in England, whilst Liverpool supporters continue to idolise him for his performances on the pitch.

Despite maintaining he is perfectly content on Merseyside, and that his focus is merely on Liverpool and then the World Cup, it's almost inevitable that one of Spain's biggest clubs will look at his situation in the summer.

Zinedine Zidane has already gone as far as saying he appreciates the Egyptian's talent.

Sampaoli: Messi has a revolver put to his head called the World Cup and if he doesn't win it, he's shot and killed

Success on the international stage is how the very best footballers are judged, and Jorge Sampaoli believes the pressure of winning the World Cup is akin to the Lionel Messi having a revolver put to his head.

Barcelona's forward has been unlucky throughout his international career, guiding Argentina to the World Cup final in 2014, as well as two successive Copa America finals.

Sampaoli has written a book which is set to be released in April, and ahead of the release there has been preview passages handed to the Viva, Clarin magazine.

"Messi has a revolver put to his head called the World Cup and if he doesn't win it, he's shot and killed," he explained.

"As a result, he can't enjoy his talent.

"What I find is that the negativity surrounding international football damages Messi."

Despite detailing the obvious pressure the forward is under, the former Sevilla coach was quick to heap praise on him.

"At this moment, I feel that I'm coaching the best player in history," he admitted.

"This is a guy who has stayed as the best in the world for 10 years.

"It's difficult to assume a level of control when your leader knows he's better than you, he executes things like nobody else."

There is such a feeling of good-will towards Messi when it comes to a World Cup, there is a sizable chunk of neutral fans who feel as though football owes a World Cup to the iconic forward, although Sampaoli believes it will take organisation to achieve such a feat.

"You have to find the best players and put them in their best position," he confirmed.

"Leo has to play like he does for his club, to put him into another structure is madness.

"Against Ecuador I was a bit strong in my tone suggesting that football owed Messi a World Cup, however I knew he was going to appear for us at the vital moments."

Real Madrid had already benefitted from Cristiano Ronaldo's explosive start to 2018, but now Portugal have enjoyed some of the No.7's great form as well.

He scored twice against Egypt on Friday night to take his tally for the year to 23 goals from 14 outings.

Records continue to be broken wherever Ronaldo is involved, as he now has 81 international goals, the third most of all time.

Looking at the 21 matches played since he helped his nation win Euro 2016, Ronaldo has represented Portugal in 15 of them and he has scored 20 times, while providing four assists.

That means he has been directly responsible for 51 percent of the goals that Portugal have scored in those 15 fixtures.

Only twice in this 15-match run has he failed to participate in a goal, once in the Confederations Cup semi-final against Chile and once against Switzerland in a World Cup qualifier.

"Ronaldo means goals," the country's coach Fernando Santos said after the most recent match, the win over Egypt.

He really does, for both Real Madrid and Portugal.

Didier Deschamps' French national team continue to prepare for their friendly against Russia on Tuesday, and in the meantime, Samuel Umtiti has appeared on a talk-show and refused to answer questions on his Barcelona renewal.

Los Cules continue to try and work out the finer details of a contract extension for the former Lyon defender, with his current buy-out clause sitting at a rather paltry 60 million euros.

As part of the Telefoot program on TF1, the French international took part in a jovial questionnaire game in which he was given the option of answer yes, no or joker to each question.

Using his joker option would be a way of essentially passing on the question, and this was his response on two separate occasions when quizzed on whether he would renew at the Camp Nou or sign for Manchester United.

His current deal ends in 2021, and the Blaugrana remain scarred by Neymar's acrimonious exit last summer.

As such, they're keen not to be burned by buyout clauses again.

Jose Mourinho is searching for a central defender to partner Eric Bailly, and given Umtiti's performances since arriving in LaLiga, it's unsurprising that he'd be at the very top of such a shortlist.

Barcelona are acutely aware they must offer the defender better terms, especially when you consider he is only 24 years old, and would cost significantly less than Virgil van Dijk.