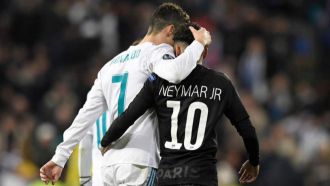 By transferring 300 million euros to Paris Saint-Germain's bank accounts, Real Madrid could have the opportunity to sign Neymar in the upcoming summer, although they could clinch his signature for 222m euros in the summer of 2019.

The latter figure is what the French club paid to Barcelona to meet his buy-out clause and bring him to Paris last August.

Two MARCA writers discuss this dilemma on when it would be optimal for Los Blancos to make a move.

If there is an option to dress Neymar in white colours this summer, we must take advantage of it. The third best player in the world - five years younger than Lionel Messi and seven less than Cristiano Ronaldo - is priceless.

The 300 million euros of his price wouldn't sound as an exaggeration for a player who was previously Barcelona's great hope for the future, the signing by which they reached the infinity and beyond - and, more precisely, the courts.

Whatever happens from here to the end of the season, the dressing room needs a change in summer.

It seems that the time of Gareth Bale and Karim Benzema is over and nobody would be better than Neymar to cover both holes, while Marco Asensio will finally take the step forward that deserves.

The collaboration of the Brazilian with the Balearic can turn the Estadio Santiago Bernabeu into the biggest show on the planet in the coming years - and that is priceless as well.

Waiting can only trigger a disaster in the form of injury, falling in love with another club or alien invasion.

Yes to Neymar's transfer, as soon as possible.

Real Madrid already have the best football player and I can't see Cristiano Ronaldo and Neymar fitting together.

I don't think the club needs to get involved in such an operation, as it is more complicated as well as excessive to bring the Brazilian now.

What's more, next year he could come for 222m euros, which I think is crazy.

Paying 300m euros for Neymar would be a time bomb in the locker room of Real Madrid.

Real Madrid have built a squad of young players and getting into an transfer of that nature requires selling players who are now important in the [Zinedine] Zidane project.

Losing three or four good players to bring Neymar would weaken the team rather than strengthen it.

The PSG player is still below Cristiano Ronaldo.

There is no doubt that there is no better replacement for when CR7 gets off the podium, but in the meantime it's better to wait.

Above all, PSG have already said that - at least this year - they are not going to sell him to Real Madrid or to anyone else.

Conte: Messi is the best in the world

Ernesto Valverde made several clever tactical decisions to help Barcelona past Chelsea in the Champions League, however Antonio Conte felt Lionel Messi was the difference between the two teams in the 3-0 result, even labelling him as the best in the world.

Chelsea actually caused the Blaugrana problems for much of Wednesday's match, yet the hosts were incredibly efficient on the counter attack, with both Messi and Ousmane Dembele putting in excellent performances.

"Messi is an extraordinary player, he's the best in the world," Conte explained in his post-match press conference.

"I think when you have the opportunity to compliment someone like Messi, you must do so.

"We're talking about someone who scores 60 goals every single season."

Despite the excellence of the 30-year-old, the Italian coach was left frustrated by the result and felt as though his side deserved better for their efforts in Catalonia.

"We've conceded a goal right away and started badly, but afterwards we've dominated.

"We've created chances to score, and over the whole tie we've had four shots hit the post, which is strange.

"It was a fantasy player who has pushed Barcelona through to the next round, he was responsible for the result."

Despite being very critical of the transfer business those in charge at Stamford Bridge have completed, or failed to complete, the coach made clear that his squad gave everything at the Camp Nou.

"I have to be honest and recognise the commitment of my players," he confirmed.

"I'm proud of them, of how they behaved on the pitch.

"We must continue with that desire to fight together."

Now Chelsea will fight to qualify for the tournament again for next season by finishing in the Premier League top four.

Messi: I'm happy to have scored 100 goals in such a beautiful competition

The supporters at the Camp Nou witnessed Lionel Messi's 99th and 100th Champions League goals during Wednesday night's 3-0 victory over Chelsea and the player spoke of his joy after the match.

He explained that he is delighted to have reached triple figures, while he also analysed the match.

"I'm happy to have reached 100 goals in such a beautiful competition, but the important thing was to move forward in a difficult match against a team with lots of really good players," he said in a surprise media appearance with UEFA.

"We managed to score early and this was important.

"I'm happy with how it all happened.

"This was a tough match and we were strong as a team.

"When we scored the third then the tie was practically ours."

When told that Antonio Conte had praised him in his press conference, Messi had some words of thanks for the Italian coach.

"I didn't hear him, but they told me what he said and I thank him for his words," the No.10 said.

"I am happy for how this night has ended and for reaching the quarter-finals, which is what we wanted."

Next up for Messi and his teammates is Sunday's match against Athletic Club, before an international break.

David De Gea produced two incredible saves to keep it goalless in the first leg of Manchester United's Champions League meeting with Sevilla but eventually found that it was not enough as his side crashed out at the last-16 stage regardless.

With the Premier League title lost it was in Europe that the goalkeeper and many of his teammates had set their sights on achieving something worthwhile, a hope that was dismissed by Los Nervionenses' 2-1 win on Tuesday night.

United were convinced of their ability to progress past Sevilla and are now left to contemplate how the club's transfer policy has failed to provide enough ammunition to score against the Spaniards until five minutes from the end of a 180 minute tie.

Jose Mourinho has overseen a 275 million euro spend since taking charge of the Red Devils, which includes the addition of Alexis Sanchez in January despite his Arsenal contract running out only six months later.

De Gea and his colleagues know first hand that the Lancashire club is no longer what it once was.

While the North American owners worry about not being able to sign world class players to a side that has struggled for a number of years now.

Indeed, De Gea is not alone in feeling hurt by this latest episode and United should also fear how the talented individuals in the current squad may currently be deciding to realise their ambition elsewhere.