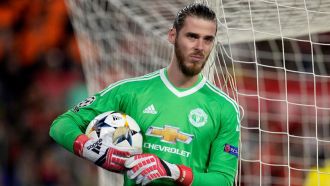 Mourinho on De Gea: If I were Real Madrid, I'd look for another player

David De Gea to Real Madrid has become one of the most persistent transfer stories of modern times and Jose Mourinho has told his former club to look elsewhere in their search for a new goalkeeper.

Speaking ahead of Manchester United's Champions League game at home to Sevilla, the Portuguese coach maintained his confidence in keeping De Gea.

"I think he will stay," Mourinho told La Sexta on Monday evening.

"I don't know what Real Madrid's intentions are, but if I were them, I would think of another player."

While noting that he wasn't surprised by Paris Saint-Germain's defeat at the hands of Los Blancos, Mourinho recognised that his United side would find it tough to win the Champions League themselves this year.

"I don't think we are candidates to win the Champions League," he accepted.

Manchester United welcome Sevilla to Old Trafford on Tuesday, but Jose Mourinho took the time in his pre-match press conference to angrily react to comments made by Frank de Boer on Saturday, labelling him as the worst coach in Premier League history.

The former Ajax coach was critical of Mourinho's record with developing youth players, even going as far as suggesting that it's a shame for Marcus Rashford that the former Real Madrid coach is in charge of his development at this time.

"I've read some quotes from the worst coach in Premier League history, Frank de Boer," he explained in his pre-match press conference.

"He had seven matches, seven defeats and zero goals and he's saying that it's not good for [Rashford] to have a coach like me."

"If he was coached by him, he would learn how to lose, because he lost every game."

Since the 0-0 draw with Sevilla at the Estadio Sanchez Pizjuan, the Reds have found form in the Premier League, recording victories over both Chelsea and Liverpool at Old Trafford, as well as coming back from 2-0 down at Crystal Palace to earn all three points.

However, the lack of an away goal in Andalusia makes Tuesday's tie difficult, something which the Portuguese coach is acutely aware of.

"It will be difficult, Sevilla didn't lose against Liverpool either home or away and the result of the first leg leaves everything open," he admitted.

"We aren't one of the best teams in the Champions League, but when you progress through this round you can start to smell the semi-final.

"When you're still in the first knockout round, everything feels far away.

"Beating Sevilla and going into the quarter final would be a good achievement."

Scott McTominay was a surprise selection for the first leg, however the academy graduate has since been an ever-present in the senior team, with Mourinho taking great delight in his development.

"I remember at the beginning of the season listening to everything he said in the dressing room.

"His humble nature is making him a good player.

"He doesn't want headlines, he just wants minutes on the pitch."

Montella: Sevilla need one goal to progress past Manchester United

Ahead of their all-important Champions League match against Manchester United, Sevilla coach Vincenzo Montella recognised the difficulty of facing the English side but trusts his team to score the goal that could send them to the quarter-finals.

On Tuesday, Old Trafford will host the return leg and the former Italy forward is confident in his team and their passage to the next round.

"It's a special match because we can reach the quarter-finals," Montella admitted in the pre-match press conference.

"It is special for me and for the club because it has been 60 years that the team has not been able to play in that round.

"We need to score one goal, and at home, we had the opportunities.

"It's going to be tough, but we have confidence."

Montella also spoke on Jose Mourinho's side and the importance of Sevilla giving their best performance in order to reach the next round of the competition.

"We know that we play against a great team, with a great coach, players and a historic club," the coach confessed.

"We have to be at our best level and be able to compete.

"It is a game that we must interpret every situation, defending and attacking when necessary."

After receiving an FA punishment for wearing a yellow ribbon on the touchline, Manchester City boss Pep Guardiola took charge of his team on Monday without the symbol of support for Catalonian political prisoners.

Deemed a political message by the English authorities, all of which are banned from being displayed at games, the Spaniard has followed up on his statement to remove the ribbon if it began to harm his club.

As such, when playing Stoke on Monday in the Premier League, Guardiola donned a daffodil as part of the Great Daffodil Appeal set up by Marie Curie, a charity which focuses on the care for people with terminal illnesses.

He also wore a badge for Prostate Cancer UK, a charity devoted to raising awareness of male prostate cancer that has backing from many figures across the world of British football.

Cristiano Ronaldo is evolving and rather than terrorising opposition defences with his pace and assists, he now concentrates on scoring goals.

His move from Manchester United to the Bernabeu was on the back of his dribbling skills and that is what he also delivered for Real Madrid but now he concentrates on hitting the back of the net so as to maintain a scoring record that has seen him get more than 40 goals in seven of his eight seasons in Spain.

Now he is seven goals short of that target and his form at the moment suggests that he will reach it without difficulty.

Ronaldo now works on doing the minimal in games so as to achieve the maximum and for example in Ipurua he had two touches before getting the opening goal and one to get the second with a header.

He is specialising in getting goals through one touch with 22 of the 33 he has this season coming that way. In other words he is concentrating on interpreting play and getting ahead of defences by thinking quicker.

It is true that Ronaldo does prefer still to receive the ball on the left of the pitch so as to have more space but he likes to end attacks by being in the six-yard box.

Ronaldo's concentration now, more so than earlier in the season, in shooting with his first tough has seen him near Messi and Suarez in the scoring charts and it has been the case with 14 of his 17 goals since the start of January.

The Portuguese has a scoring percentage of 82.3% with his first touch since January but that is still some way short of the 100% that Hugo Sanchez had with his 38 goals that he got in the 1989-90 season.