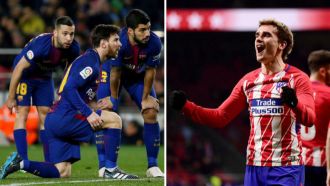 Barcelona's draw with Las Palmas has reopened the title race in La Liga.

Many had assumed that the Blaugrana had one hand on the trophy once Ernesto Valverde's team began the season so well.

However, they have stuttered early on in 2018 and their advantage has slipped away with Atletico Madrid now only five points behind, just three days before they come face to face at the Camp Nou.

Barcelona are light years away from their form of 2017 and have not had such a narrow lead over second since Matchday 15, when they were five points ahead of Valencia.

It is not surprising, as a result, that this meeting on Sunday could be a title decider.

A win for Diego Simeone's team would mean there are just two points between the teams with 11 games left to play.

Thursday evening's trip to the Canary Islands did not go according to plan for Ernesto Valverde's Barcelona as they were held by Las Palmas, and he cut a frustrated figure post-match.

The coach was furious with the penalty given by referee Mateu Lahoz, from which Jonathan Calleri scored the equaliser.

"The penalty hurt us, we have seen that they equalised with an invisible penalty," he told the assembled press post-match.

"They came out stronger [after the break] and that worried us."

He was clearly angry with more than one refereeing call made by Lahoz, who also failed to send off Leandro Chichizola for seemingly a clear handball.

"I don't want to analyse the refereeing," Valverde added.

"At half-time I spoke to him about the clear, deliberate handball outside the box by the goalkeeper.

"The penalty; I still don't know what he's given it for.

"In the dressing room it wasn't clear who had done what for the penalty."

On the game itself, he insisted that his team were up for the challenge, but that the penalty was a key moment.

"We had a lot of hope of taking the three points," he insisted. "In the first half you could feel that the danger was there, more so with so many yellow cards.

"We went ahead in the first half, but the lead was slim.

"The moment of the penalty hurt us because of how it was, then they defended well and we tried to score. There was little consistency in our play, that cost us.

"The game on Sunday is still an important game. The distance [over Atletico Madrid] is reduced, but we have hope because it's important for what's left."

"We rushed in some moments, we lacked clarity in the final pass, the final decision," confessed the Barcelona boss.

Messi set to train with Argentina at Real Madrid's Valdebebas base

The Argentine national team will prepare for their upcoming pre-World Cup friendly against Spain at Real Madrid's training facilities in Valdebebas.

Spain and Argentina are set to play on March 27 at Atletico Madrid's Estadio Wanda Metropolitano, with a training session at Real's base the day before.

According to Clarin, Messi and his colleagues will work out in Valdebebas due to its superior facilities and close proximity to the airport.

Zinedine Zidane is taking major steps to keep his star man Cristiano Ronaldo fresh and ready to play in Real Madrid's crucial games, as the Portuguese winger enjoys days off during the week.

Ronaldo's regular breaks have already been a routine that was installed in the previous season, and the formula has proven to be so successful that the French coach has continued to use the same plan.

However, this time around, Zidane has added a twist to the schedule.

Ronaldo has played much less compared to the previous campaign, and although it is not easy for Zidane to leave out his star player for certain games, the coach has managed to change Ronaldo's schedule in order to keep his legs fresh for the most decisive moments of the season.

Since the beginning of the year, he has been playing one game per week. That has meant a non-negotiable period of six, seven and sometimes even eight days off before facing the next opponent.

The striker didn't participate in any of the Copa del Rey matches against Numancia, Fuenlabrada and Leganes, nor in the postponed game against Leganes.

In addition, he was also rested for Tuesday's Espanyol defeat.

Ronaldo has his days off during the week with the exception of the Champions League, which is the main goal for the Portuguese forward.

The first leg against Paris Saint-Germain has been the only week so far in 2018 in which Ronaldo played three games in eight days; he played on February 10 against Real Sociedad, February 14 in Europe and then on February 18 at Real Betis.

Afterwards, he returned to his rhythm of one game per week.

Now, the forward is preparing for another round of matches in the upcoming Champions League week.

He will start against Getafe on Saturday after not appearing against Espanyol, as the decisive date in Paris lies ahead for the player.

Neymar could miss three months with fracture according to Brazil doctor

Neymar's injury is worse than initially stated according to the player's doctor in Brazil, Rodrigo Lasmar, who claimed that he has a fractured foot and he could be out of action for up to three months.

There has been plenty of discussion over the state of Neymar's injury since it happened playing for Paris Saint-Germain against Marseille and it was thought that he had suffered a crack to his fifth metatarsal which would see him out for up to two months.

Neymar will have an operation on his foot this Saturday in Belo Horizonte and will be aiming to get back as soon as possible so he can start the World Cup with Brazil facing their first game against Switzerland on June 17th.

Another date in Neymar's diary is the Champions League final, if PSG reach it, which is on May 26th.

"It is an important fracture to a bone in his foot," said Lasmar.

"It is sad but I understand that there is no other alternative right now. He will work so that he is right as soon as possible and we also will do out best.

"A fracture like this sometimes appears invisible, like what happened with Neymar. The best and only solution is to operate because a more conservative approach could lead to a problem in the short term."

Manchester City coach Pep Guardiola explained on Wednesday that he will stop wearing his yellow ribbon if the leaders of the Premier League club request him to, or if it hurts the team.

The FA opened a case last week against Guardiola for wearing a political symbol during matches in the Premier League, the FA Cup and the League Cup.

The yellow knot is in support of Catalan leaders Jordi Sanchez, Jordi Cuixart, Joaquim Forn and Oriol Junqueras, who are in preventive prison for their involvement in the independence process.

"It's more important what happens with the team than any of my personal beliefs," he told reporters.

"I don't think it is going to happen, but if [City] ask me, I have to accept it, they are the bosses."

The governing body of English football detailed last Friday, through a letter, that Guardiola had exhibited a 'political message' in his clothing, 'specifically a yellow ribbon', and gave him a deadline until the evening of March 5 to respond to that charge.

"My personal opinion is not a political opinion," Guardiola continued.

"When men and women wear a pink ribbon it is because they support the fight against breast cancer, and the same thing happens when I wear a badge against prostate cancer.

"The idea is the same, although, of course, I do not want to harm the team."