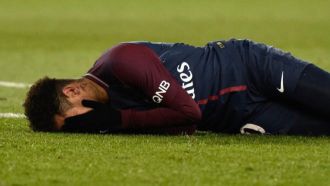 After a serious injury blow to his son, Neymar's Sr has spoken out to reveal the extent of the injury, with Paris Saint-Germain yet to confirm it.

The forward has suffered an ankle sprain and a fissure in his fifth metatarsal, but no timeframe has been determined for his return.

"PSG know that they can't count on Neymar for the next six to eight weeks," Neymar Sr confirmed to ESPN Brazil after he called the show as they discussed the chances of him playing Real Madrid.

"There is no other option.

"We are waiting to speak to PSG to resolve the situation.

"It's not Neymar's decision, it's not his to make.

"Now the Brazil national team doctor will come and together we will take a decision.

"We will decide tomorrow [Wednesday].

"We didn't want to be in this situation, but we must try to get Neymar back to his best.

"Nobody can think that Neymar can be thinking of playing against Real Madrid with this injury."

The player's entourage are not happy about speculation that he could return to face Real Madrid, given the seriousness of the injury.

Emery: Neymar will not be operated on

Neymar was injured in Paris Saint-Germain's last match against Marseille, and it had been reported that the Brazilian was set to undergo surgery, something that PSG coach, Unai Emery, has denied.

A fractured metatarsal was expected to keep him out of action for two months, and put his participation at the World Cup in jeopardy.

GloboEsporte published the news but Emery has refuted it.

"We have to be patient with Neymar, he will not be operated on," he said.

"There is still a small possibility that he can play against Real Madrid, but the information about the operation is false as we have to wait to make a decision."

Pochettino: Messi? For me, it's Maradona first

Mauricio Pochettino has weighed in on the debate over Argentina's best ever footballer and has admitted that Diego Maradona comes ahead of Lionel Messi, from his point of view.

Both will go down as two of the best to have ever played the game, but the Tottenham boss was clear that he prefers the Napoli legend.

"Messi? Maradona first," he said in an interview with Italian radio station CRC.

The Spurs boss also spoke about this side's Champions League clash against Juventus, which finished 2-2 in the first leg in Turin.

"Juventus are a great team with great players," he said.

"We have a lot of work still to do.

"The result from the first leg was excellent, but there is no favourite."

The second leg will take place at Wembley on March 7.

Queiroz: Cristiano Ronaldo is the best in the world, Messi is out of this world

Having his say on the eternal debate of who is the better footballer out of Cristiano Ronaldo and Lionel Messi, current Iran coach and former Real Madrid boss Carlos Queiroz gave an interesting answer.

He explained that Ronaldo is the best of the humans, and that Messi is not one.

"[Cristiano Ronaldo] is the best player in the world," Queiroz, who has coached Ronaldo at Manchester United and for Portugal, said in an interview with FIFA.com.

"I've always said that Messi is an extraordinary player, he's out of this world.

"If he were human, he wouldn't have had that magical moment [against Iran at the 2014 World Cup].

"I don't usually like losing, but I didn't come away from that defeat with a negative feeling.

"It's when something magical like that happens that you know that football is alive and kicking, and that's why it's one of the best sports in the world to watch.

"It's even more of a special moment when it comes from a player who shouldn't be allowed to play by FIFA until it's proven that he's actually human!"

Reflecting on Iran's chances at this year's edition of the World Cup in Russia, Queiroz joked that he has a lot of Ronaldos in his squad.

"Times have changed and now I've got other Ronaldos with me," he said.

"These are the Ronaldos I've got to look after now and who I've got to pay attention to."

Iran find themselves in a group with Spain, Portugal and Morocco.

In Spain they're crazy about Harry Kane

The English media continue to push rumours linking Harry Kane with a move to LaLiga in the summer, and they've gone as far as to say that Spain are crazy about the forward.

Real Madrid are the obvious club being linked with the Premier League's leading scorer.

He is at the very top of his game and Los Blancos' forward line is in desperate need of rejuvenation.

In Tuesday's edition of The Mirror, there is an entire spread dedicated to Spurs' academy graduate and just why he is a potential signing for the current Spanish champions.

This piece is aided by the words of the club's former president, Ramon Calderon, who believes his club will do whatever it takes to ensure Kane is an attraction at the Estadio Santiago Bernabeu after the World Cup.

"I think the goal is likely to be Kane rather than Lewandowski, because of his age," he explained in an interview.

"It will be difficult, and if they can't sign Kane only then will they try to get Lewandowski."

The Spanish giants have seen first hand this season exactly what Kane is capable of in front of goal.

His tally for the campaign to this point stands at 24 goals in the Premier League, 10 more than Cristiano Ronaldo's domestic return in 2017/18.

Business between the two clubs has been cordial and regular over the course of the last decade with Luka Modric and Gareth Bale both swapping North London for the Spanish capital, whilst Rafael van der Vaart went in the opposite direction.

Andre Villas-Boas was in charge when Bale departed for Madrid, and the Portuguese coach was quoted in the piece encouraging his former player to leave Spurs in order to fulfil his career potential.

"It depends on Harry and his ambitions for the future," he admitted whilst speaking in Monaco as a Laureus ambassador.

"If he has a hunger for trophies then he would have to leave Spurs."