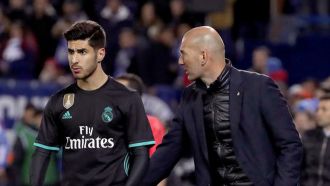 Asensio is overtaking Benzema, Bale and Isco in the race to start in Paris

It was Real Madrid's backups who took to the pitch at the Estadio Butarque on Wednesday night, but this gave the likes of Marco Asensio a chance to show why they should start in Paris.

As Fernando Hierro said of Raul, Asensio is like a Ferrari who will overtake everyone.

Despite not being involved in the final moment of any of the goals, he was one of the stand-out figures for Real Madrid.

With him on the ball, nobody knew what to expect and he showed his quality.

Having already outshone Gareth Bale and Karim Benzema in the last few games, he's now done the same to Isco, who is lacking consistency and wasn't at his best.

Of course, a lot could still change between now and March 6, when Real Madrid visit the Parc des Princes.

After a hard-fought 0-0 draw between Sevilla and Manchester United, Joaquin Correa praised his team's performance and cursed their luck at not getting a win.

Correa stood out with an energetic display, but couldn't find a way past United goalkeeper David de Gea.

"[De Gea] has shown that he is one of the best in the world, it's only thanks to him that they didn't lose," Correa said.

"We created a lot of chances, but with the players United have it was difficult because they counter.

"We have to fight because it will be difficult."

On the second leg, the forward was clear what his team have to do.

"[We have to] come out focused, with the same energy and enthusiasm," he added.

A commanding performance from David De Gea held Sevilla to a 0-0 draw versus Manchester United in the first leg of their Champions League Round of 16 tie on Wednesday night at the Estadio Sanchez Pizjuan in Sevilla.

United's Spanish goalkeeper was the star on the night, making a number of key saves, including one on Sevilla's Luis Muriel from point-blank range on the brink of half-time.

The contest had all the makings of a Jose Mourinho special; the Portuguese had his team set up well defensively, while looking to strike on the counter. As for Sevilla, they will be left to rue their missed chances, knowing that the stellar goalkeeping of De Gea is something they have to contend with in the return leg in Manchester.

Sevilla boss Vincenzo Montella went with his strongest starting XI in the same 4-2-3-1 formation that he has been utilizing in league play, while United manager Mourinho raised an eyebrow or two by leaving the likes of Paul Pogba, Anthony Martial and Marcus Rashford on the bench.

There was action at both ends to start, and former Manchester City man Jesus Navas almost opened the scoring with a scorching right-footer that just missed wide.

Mourinho was forced to go to his bench much earlier than he wanted, as a hamstring injury sent former Zaragoza and Athletic Bilbao man Ander Herrera to the dressing room and was replaced by Pogba.

United started to gain control and some clever movement then gave Romelu Lukaku a chance to score after getting in behind the Sevilla defence, but the Belgian fired well over the crossbar.

But Sevilla wrestled things back in their favour toward the end of the half, and they had two glaring chances to score right before the break, but De Gea showed his class with two massive stops.

First the former Atletico Madrid No.1 tipped a Gabriel Mercado header over the crossbar, and then moments later he made a reaction save on a Muriel header that may well go down as the save of the tournament.

Sevilla were the better side to start the second-half, but United stayed firm in the back thanks to De Gea, who was there to save a Lenglet header midway through the half.

The Andalusians kept at it though and Muriel did well to find space on the right and floated a cross to Pablo Sarabia, but the header back across goal was off-target.

United had some of their best chances in the final 10 minutes and Lukaku thought he had scored but was whistled for a handball. Mourinho's men had more life after the introductions of Rashford and Martial for Alexis Sanchez and Juan Mata, and Rashford almost stole a late win for the English outfit but his shot skipped wide.

In the end, the two sides would have to settle for the draw, with it all to be decided at Old Trafford next month.

Bartomeu: I don't think Messi is on his last Barcelona contract

Barcelona president Josep Maria Bartomeu took advantage of his stay in London to discuss his belief that Lionel Messi will remain at the club after his current contract expires.

The renewal of Messi's deal only came in November, with the previous deal set to expire in June 2018, but the extension to 2021 will mean that the Argentine playmaker will have spent 17 years with the first team.

"We are a club that bets on good football," said Bartomeu to Bloomberg. "We have a unique style of play and Messi is the best player in the world, our key player.

"Andres Iniesta is an example. We want him here not as a player, but as a legend in the future.

"And with Messi I hope it's the same.

"Now he's got a four-year contract, but I don't think it will be his last [with Barcelona]."

The sale of Neymar from Barcelona this summer appeared to create inflation in the transfer market and Bartomeu is unsure whether things will stabilise or not.

"I would like to say that the market will stabilise, but I am not sure," said the Barcelona president.

"There are more and more clubs with very wealthy owners and even states that invest in football.

"It is becoming increasingly difficult to go to the market and sign the best players.

"Our strategy is to sign young players, teach them our way of playing and to offer them a chance at playing in our first team."

Ahead of the summer transfer window, Bartomeu has stated that transfers will be funded by the sale of some current players.

"This season we invested more in transfers due to the sale of Neymar," said Bartomeu.

"But our strategic plan is to invest a further 60 million euros in the summer from money generated by player sales."

Furthermore, Bartomeu stated that his next goal in terms of marketing is to secure naming rights for the Camp Nou.

"After signing with Beko, our next goal is to get a sponsor for the naming rights to the Camp Nou," he continued.

"The total investment [by Beko in training shirt sponsorship] will be 600m euros, the highest that the club has ever done in the city of Barcelona.

"We are working with two or three companies and probably the agreement can contribute to half of the investment."

Emery's warning for Real Madrid: They don't know what they'll face in Paris

Paris Saint-Germain are already preparing for the visit of Real Madrid to the Parc des Princes in March in the second leg of their last 16 tie, with Unai Emery relishing the challenge.

The coach has set out a message to the team's fans, calling upon them to back their team when Real Madrid and Marseille visit the French capital in the Champions League and in Ligue 1.

"In most games this season we have shown that we can do it, but it's especially true at the Parc des Princes where we feel like a huge force, as we have seen in the 17 games we have won this season," a message published on his website started.

"Marseille and Real Madrid know that they have to come to Paris, but what they don't know is what they will really face.

"These are two big games for those who will back us.

"Our team is dedicated and convinced, but they will be even more so in these two games.

"We will give our all on our pitch and we won't think about the past or the future, only about the game that we will play.

"Since the foundation of PSG we have beaten Marseille more than 20 times at home.

"After a few days of rest we will come back together again.

"We only think about the Parc des Princes, our home, where we will defend with you until the end with all the enthusiasm of the games of February 25, February 28 and March 6.

"These are three games which will form part of the history of PSG.

Paris Saint-Germain lost the first leg 3-1 at the Estadio Santiago Bernabeu, so certainly need all the support they can get.