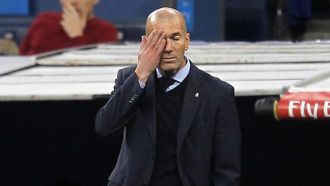 Zidane on whether he'll be fighting for his job vs PSG: That's clear

After a humiliating 2-1 defeat to Leganes at the Estadio Santiago Bernabeu knocked Real Madrid out of the Copa del Rey, Zinedine Zidane faced the press to take the blame.

Javi Eraso and Gabriel Pires scored either side of a Karim Benzema strike to overturn a first leg win for Los Blancos and the coach was upset.

"Yes, it's a failure for me, clearly," he admitted.

"We didn't play the game, especially in the first half, after winning a complicated game away.

"We can say what we want but it's very hard, it's a difficult night for everyone.

"We will look at the situation and I will first because I am to blame.

"We can't change things, there were 90 minutes to do that and we didn't.

"Now we have to think about tomorrow, to get up and keep working because on Saturday there is another game."

Zidane was determined to retain his focus on other competitions, starting with a game against Valencia this weekend.

"We will keep going, as tomorrow we have training and on Saturday we have a game," he said.

"We will keep going, there's no other solution."

Real Madrid will be hoping to shorten their 19-point deficit behind league leaders Barcelona, particularly now having been knocked out of the Copa del Rey.

The Champions League clash with Paris Saint-Germain now becomes even more important and Zidane was asked if his job is on the line in that tie.

"That is clear, I am responsible for this," he said.

"I'm the one who has to find solutions for the team to be more efficient."

Zidane still has a few weeks to find those answers, with the first leg of the PSG tie on February 14.

Butragueno: We didn't expect this and we're sorry for the supporters

Even an important figure like Emilio Butragueno has confessed that the atmosphere within Real Madrid is not a good one after another shock defeat.

The former striker insisted that it is time for everyone to reflect, though he did praise Leganes after they knocked Los Blancos out of the Copa del Rey.

"Results aren't what we expected or what these players should be getting, so we have to think about it and reflect," he said.

"There are months ahead of us, but we believed we would make the semi-finals.

"We have to focus on what is left and that's important.

"It was a bad night for us and we didn't expect what happened."

He sent a particular message to the fans, apologising for the disappointment.

"It's logical that they are sad and we are sorry for them," he admitted.

"We always want them to be proud and it's what the players try to do, so we are sorry."

However, he would not question the decision of the Zinedine Zidane publicly, with the coach having selected to play several fringe players in a crucial tie.

"They are technical decisions which we don't go into," Butragueno said.

"We don't like to give our opinion on these things."

Finally, he also reserved praise for the opposition who are in the next round.

"We have to congratulate Leganes, playing how they did has a lot of merit."

Leganes joins Valencia and Sevilla in the final four, plus the winner of Espanyol vs Barcelona.

PSG enters a state of alert: Neymar regrets his signing

Not a day goes by where there is no discussion of Neymar's situation with Paris Saint-Germain, and it is now being reported that the Brazilian forward has told those closest to him that he regrets joining the French side from Barcelona.

The 25-year-old joined for an enormous 222 million euros in the summer and signed a five-year contract, but a couple of issues have blighted his early career in Paris.

The troubles have been reported by both L'Equipe and Le Parisien, two of France's most illustrious sports newspapers.

Neymar is believed to be 'somewhat tired' of Ligue 1, a league where he doesn't feel comfortable with the defensive-minded play and the numerous fouls he receives.

The whistles from the PSG crowd after not allowing Edinson Cavani to take a penalty, where Neymar had already scored a hat-trick and one goal would have made Cavani the club's all-time highest goalscorer, appeared to also annoy the Brazilian who is believed to miss LaLiga.

The club are aware of his discontent and there is concern surrounding Neymar as there is talk that PSG are now in a state of alert, according to Le Parisien.

In addition, the forward's distant relationship with both Cavani and coach Unai Emery is of great concern amidst the continuous rumours of Neymar's possible exit to Real Madrid.

and Yerry Mina in Barcelona's matchday squad for their Copa del Rey second leg against Espanyol.

Also making the list are Andres Iniesta and Paco Alcacer, who have both overcome injuries, while Ousmane Dembele, Thomas Vermaelen and Jose Arnaiz are injured.

With 19 players on the list, one will have to be cut ahead of the game.

Barcelona keep the No.7 shirt free... for Griezmann?

It has been confirmed this Wednesday that Philippe Coutinho will inherit the No.14 from the departing Javier Mascherano, meaning that Barcelona's No.7 shirt remains free.

Previously worn by Arda Turan, who left for Basaksehir earlier in the January window, the No.7 jersey might soon belong to Antoine Griezmann, if Barcelona manage to sign the Frenchman in the summer.

Griezmann has worn the No.7 at Real Sociedad, at Atletico Madrid and with France, so some believe their decision to keep it free has something to do with a summer push for the 26-year-old.

However, as MARCA reported last weekend, the player isn't yet sure what he wants to do.