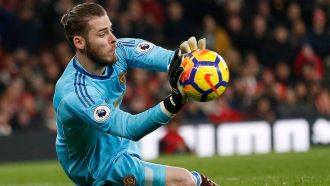 De Gea is once again favourite to join Real Madrid

Real Madrid firmly closed the door on the transfer of Kepa at least until June but this does not mean that they have ruled out the idea of bringing in a goalkeeper for next season with David de Gea first and foremost and then Thibaud Courtois among the preferred options.

Now is the time for reflection, as with other positions on the pitch, and looking into who would be the wisest choice to play in goal looking forwards.

With Kepa looking at a new deal now at Athletic which would see a buy-out clause of 80 million and Zidane not keen on brining in reinforcements during January, a move for a goalkeeper would be the plan for the future.

The search for a goalkeeper is nothing new and includes the failed attempt to bring in De Gea during the summer of 2015, with Keylor Navas on the verge of going the other way, and the same deal was rumoured to be on the cards also the following year.

Real's success this season, the performances of Navas along with the possibility of bringing in either De Gea or Courtois from their respective clubs, will go a long way towards what happens.

The option of Kepa in a cut-price deal is no longer available and 80 million would put him in the same bracket as the other players but without their experience.

A recent survey valued Harry Kane just behind Neymar and Lionel Messi, but one area where the Tottenham Hotspur striker can trump that star pairing is in the race for the 2018 Golden Shoe.

So far, Kane has 21 goals, putting him ahead of Edinson Cavani and Ciro Immobile on 20, and Messi with 19.

The Argentinian's display against Betis has seen him jump two positions compared with the previous week, whilst Luis Suarez has also had a prodigious rise up the table.

El Pistolero has scored on seven consecutive matchdays, allowing him to draw level with Neymar in twelfth position.

Athletic Club are already considering life without Aymeric Laporte after he reached the basis of an agreement with Premier League leaders Manchester City who are ready to pay his 65 million euro release clause.

The French defender is expected to sign a five year contract at the Etihad Stadium and will soon join Pep Guardiola for training.

Laporte will be wearing the blue of City by the end of the transfer window, as he came close to doing in 2016 when his release clause was just 50 million euros.

The news comes as a surprise, arriving just days after he publicly praised team-mate Kepa for committing his future to the club by signing a new contract.

Guardiola is keen to add another central defender and wanted Laporte right from his arrival in 2016, though the Frenchman turned down Txiki Begiristain and his negotiating team at the last moment.

Laporte's current deal runs until 2020 and from July his release clause will increase to 70 million euros.

Laporte discussed the potential move with Josu Urrutia, the club's president, as he visited the training ground at Lezama on Tuesday, though it was still in the very early stages at that time with neither the club nor the player aware of any such agreement in the morning.

City are confident that a deal will be completed at the start of next week.

Athletic are also prepared to reinvest the funds received by spending in the remaining week of the transfer window to replace one of their key men.

Mbappe will be fit to face Real Madrid

Kylian Mbappe is set to be fit to play for Paris Saint-Germain against Real Madrid in their Champions League clash next month with tests having allayed the worst fears of the club.

He was injured in a collission with the opposition goalkeeper during the clash with Lyon last Tuesday but he will be back in time for the game against Real on February 14th.

As things stand, the Frenchman will not be included in head coach Unai Emery's matchday squad for tomorrow's game against Guingamp and is unlikely to feature in the clash to Montpellier.

Mbappe took to social media to reassure fans and his return date is expected to be before the Ligue 1 giants travel to the Bernabeu.

Teammate Neymar is also unavailable for tomorrow's match as he looks to recover from a thigh strain.

Messi: As good as ever

Now having entered his third decade, Lionel Messi may not have quite the same explosivity as in previous years but that does not mean that he is any less dangerous as he knows when and where to run better than ever.

It may seem that the 'little flea' has rested more under Ernesto Valverde, the truth is that this season he has played more than ever when fit, 88.61% of the time.

He was given a break during the games against Juventus and Sporting in the Champions League who otherwise has only not played in the cup.

Messi's goal scoring record this season is better than in recent years as he has 19, compared to 15 and 11 at this stage of the campaign in the last two seasons. He is near to the best statistics in his career, although he is a long way short of the 28 he had at this stage in the 2012/13 campaign.

With Neymar gone, Messi has had to look elsewhere to find players that he can link-up with and Jordi Alba has come to the fore this season. The Argentine's passes over the top of rival defences for Alba have been difficult to defend and a mark of Valverde's team. So far Messi has nine assists along with the 19 goals.

On top of this of course is also the spectacle and bring fans to their feet such as away to Betis where he dominated and ran the game.

It leaves open the debate which is the best Messi, whether it was the explosive Messi or the present version where he controls the game more.

Email : [email protected]
Προηγούμενο : The second half is where Barcelona are strong | Επόμενο : Zidane on whether he'll be fighting for his job vs PSG: That's clear
Προβολές : 495
- 8434 προηγούμενη ημέρα