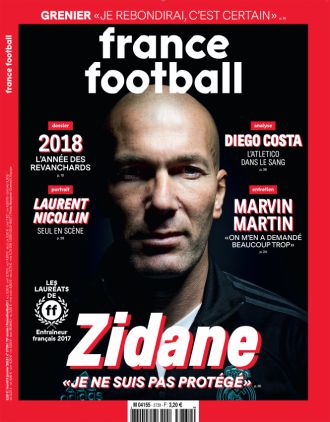 Zidane: The danger is there but I'm not going to change, I know how to react

Real Madrid is currently in a sticky situation, 16 points behind Barcelona in LaLiga, but Zinedine Zidane is confident he can turn it around and will continue to count on his ideas and methods.

Zidane, who has been selected as the best French coach of the year for the second consecutive season, opened up on the state of the Spanish giants this season.

In an exclusive interview with France Football, he made it clear that he is ready to face situations like the one he is currently experiencing with Madrid.

"I have been prepared for these complicated situations," Zidane explained.

"I want to show that I am also a good coach in difficult times.

"So, I'm not surprised when things do not work so well.

"I know how to react, right now, the danger is there, but I'm not going to change."

Zidane's message is therefore quite clear, and as he has already stated repeatedly, he is prepared for anything.

Bartomeu: Barcelona are signing one of the best players in the world

Finally being able to call Philippe Coutinho a Barcelona player, club president Josep Maria Bartomeu looked forward to one of the game's top players strutting his stuff at the Camp Nou on Monday.

Officially unveiled as a Blaugrana man, the Brazilian has cost 120 million euros plus 40m euros in add-ons as he moves from Liverpool.

"One of the best players in the world has come to our club and we are very happy," the president told reporters.

"There were other clubs that had an interest in Coutinho, but he is here and joins our project under Ernesto Valverde."

Bartomeu also recognised Coutinho's attitude throughout the time Barcelona have been trying to sign him, indicating that Liverpool's recent change in stance was the key to unlocking the move.

"Coutinho has been surrounded by his family, which shows that he and his family wanted the move to become a reality," he added. "We want to thank him for his determination.

"I want to thank Liverpool, who are one of the best clubs in Europe. Finally we sat down and we reached an agreement.

"Without their willingness to negotiate, it wouldn't have been possible."

Injured for the next three weeks, the midfielder is unable to feature right away but his new club president was certain that the wait would be worth it.

"We are very excited for all the Cules around the world to meet Coutinho," said Bartomeu. "We've been trying to sign him since last summer.

"Our technical team, with Pep Segura and Robert Fernandez, have been saying for months that he was necessary. It hasn't been easy, it has involved a lot of work.

"The important thing is that he wanted to come. He has shown patience and has worked hard to be here."

Coutinho: I would like to thank Barcelona for their efforts and patience

Few expected Philippe Coutinho to become a Barcelona player so early in the transfer window and yet it was his new club's patience that the midfielder praised once he was unveiled on Monday.

With a move in the summer denied by Liverpool, Coutinho's prayers were finally answered when the two teams struck a 160 million euro deal in the first week of January.

"[This is] the realisation of a dream," beamed Coutinho to the assembled press. "I have to thank many people; God, my family, my wife and my daughter.

"I also want to thank all the efforts of Barcelona, they had a lot of patience.

"I would also like to thank Liverpool for the five years that I spent there, and to the management there who understood that this was my dream."

Having taken in the 3-0 win over Levante on Sunday, Coutinho spent the next day touring the club facilities and cannot wait to pull on the Blaugrana kit.

"I watched the game yesterday from the hotel, today I went to the training ground," he continued. "I have met some of my new colleagues; they have shown me where we train, where we eat...

"I'm very anxious to get started.

"Until I arrived here, I couldn't believe it. When I start training with my teammates, I'll believe it all then."

Speaking in Spanish to 101 media outlets and 161 accredited journalists, 43 of them international, Coutinho spoke about the impact of his good friend Neymar on the move.

"I have talked to [Neymar] and he spoke very well about the city and the squad," he asserted. "I have also spoken to Paulinho and Luis [Suarez].

"I hope to be very happy here.

"I play with Neymar in then national team and we've been friends since we were young. He is a great player, but we have different characteristics, I came to Barcelona to find my own space.

"I haven't met [Lionel] Messi yet. It is an honour to be on the same team as him."

Coutinho was then pressed on why he chose Barcelona, who he can help steer to league title glory this season while cup-tied for Europe.

"LaLiga is a very difficult competition. We have to be focused on every match to go the distance."

Coutinho arrives at Barcelona injured, will be out for three weeks

Barcelona fans will have to wait before seeing new signing Philippe Coutinho in action, with the midfielder joining the club with a hip injury.

Confirming the fitness issue, the club expect that he will be out of action for approximately 20 days.

Therefore, the former Inter man will be on the sidelines until the end of January or the start of February.

If all progresses as expected, he could be available to Ernesto Valverde against former club Espanyol away from home on February 4.

Should Barcelona advance in the Copa del Rey, his debut could also take place a few days earlier in the first leg of the semi-final in that competition.

Neymar and Messi are worth 2.5 times more than Cristiano Ronaldo

According to an annual report on the market value of footballers from the five major European leagues, this statistic regarding the top three players stole the headlines.

The CIES Football Observatory, who recently published the report, took several criteria into account, such as the age of the player, the position, the duration of their contracts and their performances.

It concluded that the player with the current highest market value is Neymar, valued at 213 million euros, which is nine million less than what the French team paid last summer to sign the Brazilan.

However, Cristiano Ronaldo, the most successful player in the last year, is far from the top positions.

The Real Madrid striker occupies the 49th position, with a price of 80.4m euros.

Among the top 10 are five players who play in the English Premier League.

Only two LaLiga players: Messi and Antoine Griezmann (eighth) are in the top 10, with the Atletico Madrid striker having a market value of 150.7m.

The first Spaniard in the ranking is Alvaro Morata, in twentieth position with an estimated value of 108m euros.

Lastly, Virgil van Dijk, the most expensive defender in history, for which Liverpool have paid almost 78.8m euros, is valued at 50.8 m.