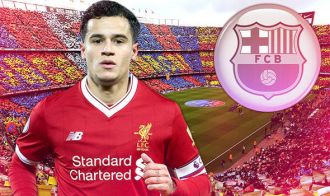 Barcelona's interest in signing Liverpool and Brazilian playmaker Philippe Coutinho is no secret, while it's also been made clear that the Reds are keen to keep him.

As such, any agreement for the player would be a very expensive one, which means Barcelona could break the winter transfer record for both Spain and the world.

Liverpool themselves have just set the record for the largest January transfer fee, with their purchase of Virgil van Dijk for 84 million euros.

However, it is estimated that the figure for Coutinho could be as high as 150m euros, which would far surpass this, as well as setting a new record as Barcelona's largest transfer in history, above the 105m euros they paid for Ousmane Dembele in the summer.

It would also be much larger than the current record for a January signing in Spain, which belongs to Klaas-Jan Huntelaar and Real Madrid, who paid 27m euros to sign him from Ajax in 2009.

Dembele fit and ready to return for Barcelona

After 18 games out of the team, Ousmane Dembele has been declared fit to face Celta Vigo on Thursday in the Copa del Rey.

A serious muscle injury sustained away to Getafe earlier in the campaign had a jarring effect on the winger's adaptation to the Camp Nou club and he will no doubt be out to make up for lost time if unleashed in the first game of 2018.

Also a potential returnee at Estadio Balaidos is Rafinha, who has received his medical discharge just as the club confirmed Dembele did on Tuesday.

Barcelona soon name their matchday squad to travel to Galicia and Ernesto Valverde is now in charge of rewarding the Frenchman for a successful recovery.

The objectives for Barcelona in 2018

Barcelona return to training after their break for New Year and for their South American contingent of Lionel Messi, Luis Suarez and Javier Mascherano it is the first time since they beat Real Madrid 3-0 at the Bernabeu before Christmas.

For the Catalan club the trio offer polar differences as the first two are the key attacking pair that have hit 25 goals between them in LaLiga to put them clear at the top, with a 14 point lead over Real Madrid and a nine point advantage over second-placed Atletico Madrid.

Messi and Suarez are also fundamental to the Azulgrana's hopes in the Champions League and the Copa del Rey.

Mascherano though is in the final stages of his time at Barcelona and he could well end up watching the team pick up their trophies at the end of the season from China.

He has an agreement with Fortune Hebei and it means the board will need to sign another centre-half with Yerry Mina's name on the table although they could prefer to go for a player with more experience.

At the same time Barcelona will continue to negotiate for Philippe Coutinho even though he will not be available for the Champions League and that they will have Dembele back from injury.

Liverpool know that they will not be able to keep on to the Brazilian for very long and 120 million euros are set to be what will be necessary to bring him in.

The board will also need to work on renewing the contracts of Sergi Roberto and Gerard Pique as well as improving the deal that Umtiti has so as to ward off clubs that are looking at him.

The president Josep Maria Bartomeu needs to also consider whether to renew sporting director Roberto Fernandez and also look at ways to improve attendance at the Camp Nou which is the worst in a decade.

Guardiola: In England, you don't protect the players. You can't play every two days

Manchester City manager Pep Guardiola will be without Brazilian striker Gabriel Jesus for up to six weeks and warned that the intense festive fixture programme in the Premier League was risking players' health.

Jesus picked up a knee injury in Sunday's goalless draw at Crystal Palace and is set for a spell on the sidelines.

"Gabriel will be out four to six weeks, maybe a bit longer, hopefully as soon as possible," Guardiola told reporters after Tuesday's 3-1 home win over Watford.

Kevin De Bruyne, who survived a wild challenge at Palace, was able to play but Guardiola has another injury concern with Kyle Walker struggling in the latter stages on Tuesday and set for further tests.

While acknowledging the tradition in England of playing through the holiday period, Guardiola was critical of making his team play on Sunday and then Tuesday.

"What everyone saw in the last weeks how many injuries the players have. We are going to kill them. The bosses at the federation have to reflect. It's not normal to play the 31st and two days later," he said.

"I know the show must go on, but they have to control it. They don't protect the players, the people come to watch, not the managers or the press conferences but the players.

"In England, you don't protect the players. You can't play every two days. The tradition is the tradition, we have to think about it a little bit. The players are artists and they are the reason we are here. You have to look for the quality not the quantity," he said.

The former Barcelona and Bayern Munich manager said he would be happy to see games over the festive season but more spread out.

"I'm not saying change Boxing Day, the great tradition.... but it's not basketball or tennis, the players need recovery. Just see how many players have muscular injuries."

Guardiola was able to call on forward David Silva, who had missed recent games for personal reasons but said he could skip other games due to the same issues.

"We are very happy he is back with us. We don't know how long he will be with us but you saw again today he essential player with us. He showed how important he is for us," said the Spaniard.

"He is free to stay or to leave. It depends. He wants to stay but family is the most important thing in life. The family is most important, I would never push him," he added.

Cavani on Neymar penalty fiasco: What happened was greatly exaggerated

It was one of the most controversial moments to hit Paris Saint-Germain's of late and yet Edinson Cavani has insisted that his reported penalty spat with Neymar was nothing out of the ordinary.

Stating that such moments are of little significance, Cavani added that the sort of exchange had between the pair should have remained in the dressing room rather than be blown up by the media.

"They create or invent stories that don't exist, what counts is when the team scores a goal," the striker told Uruguayan outlet Ovacion.

"We have to work hard and play together to achieve our objectives with the team, and everyone who demonstrates that will be fine. But, if there are people who don't feel it or think differently, that's on them.

"With Neymar, there was nothing special about what we discussed.

"What happened on the pitch or in the dressing room was greatly exaggerated and they must remain in that place because that's what football demands."

Cavani spent Christmas top of the Ligue 1 scoring charts having bagged 19 times in the competition this season with Neymar following behind on 11 goals.