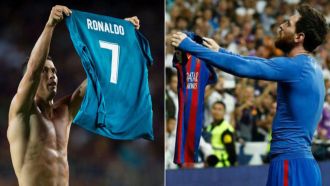 With both teams enjoying a good moment of form and about to face each other for the third time this season, Real Madrid and Barcelona will be hoping for a spectacular El Clasico to finish off the year, and the former, fresh from their Club World Cup triumph, will be looking to derail the latter, unbeaten since their last match at the Estadio Santiago Bernabeu.

The reality is that both are on the crest of the wave, but make no mistake, this is a 'final.'

Real need the victory so they won't have to say goodbye to their league title (11 points behind, but with one game less), whilst the blaugrana will almost certainly eliminate their biggest rival for the league with a win.

Five titles in 2017, their most ever in a calendar year, give players, staff and supporters of Los Blancos the belief that they're still very much the team to beat.

The final trophy won, the Club World Cup, will be offered to their fans before the match, which is sure to create a fervent atmosphere as the teams warm up.

There will be no guard of honour of course, but a small party in honour of the world champions.

Zinedine Zidane's side can also be strengthened in the knowledge that one of those five titles was achieved in August against Barcelona.

It was the Supercopa de Espana, and Real were much better than their opponents, winning with authority both in the first leg at the Camp Nou (3-1) and the return (2-0).

Madrid have continued to win all titles available to them, but have faltered in the league, to the point of heading into this Clasico in a 'must-win' situation.

"We are forced to win," acknowledged Real captain, Sergio Ramos.

Blow to the league

Barcelona go to the Bernabeu with the undoubted goal of landing a final blow to their great rivals.

In spite of the club's public declarations that nothing will be decided because there is still a lot of LaLiga to be played, everybody knows that 14 points would be an insurmountable obstacle for Madrid.

Ernesto Valverde's team arrive with moderate optimism, but since the two painful defeats against Real in August, the trajectory of Barcelona can best be described as spectacular.

Without making any noise, Valverde has worked on both sporting and mental aspects, and has recovered the pressure that has been missing in recent years.

So much so, that they are the least scored against team in the league, thanks to an excellent defence and the exceptional Marc-Andre ter Stegen.

Offensive work has not been necessary.

Leo Messi is responsible for that, fully aware that in a season without Neymar, he would have to drive the team on.

The work of the coach can also be seen on a personal level.

Last season, three players finished by suggesting that they might leave Barcelona.

Valverde wouldn't allow it and from the first moment he has given all his confidence to Jordi Alba, Andres Iniesta and Ivan Rakitic; the three in question.

Alba is key in attack and Leo's best partner; Iniesta has returned to take command; and Rakitic gives the balance that the team needs.

Barcelona have been cruising for a long time with every player at a very high level.

The only doubt will be the performance of their defence, without another of their key players: Umtiti.

Zidane: The Bernabeu crowd must play a part

There will be 11 Real Madrid players on the pitch in Saturday's Clasico and they'll be cheered on by 82,000 supporters in the stands of the Estadio Santiago Bernabeu, at least that is Zinedine Zidane's hope.

The coach spoke on Friday about how important the Real Madrid faithful will be and of how they'll be needed in order to make home advantage count.

"For us the fans are a plus and it's a moment for them to be with us," the French coach said during Friday's press conference.

"We won't win the match in 15 minutes, but with patience and with time.

"We will need them until the end."

It is expected that many ticketless Real Madrid supporters will also make their way to the stadium before the match, in order to cheer on their heroes as they arrive.

There has also been a push to ensure that those with tickets are actually Real Madrid fans, with several Barcelona supporters having been able to buy briefs for the home section for recent Clasicos.

Bale will aim to make an impact from the bench

Zinedine Zidane has decided that Gareth Bale will start Saturday's Clasico on the bench, hopeful that the Welshman can make an impact when he comes on in the final half an hour.

Although he was recovered enough from injury to take part in the recent Club World Cup, Bale isn't yet match sharp, after spending nearly three months on the medical report.

As such, he is not ready to play from the start in this blockbuster match.

Bale, though, has performed well as a 'super sub' so far this season, coming off the bench to steer Los Blancos in the right direction in both the Copa del Rey and the Club World Cup.

In the Club World Cup final against Gremio, he almost scored a wonder goal, while he did score the winner in the semi-final against Al-Jazira.

One of the biggest absences in Saturday's El Clasico will be Neymar , but the player has confessed that he won't even be watching the biggest club game in the world.

The Brazilian was one of the great threats for Barcelona against Real Madrid, something that Los Blancos captain, Sergio Ramos, has acknowledged.

However, he's already started his holidays far from the Estadio Santiago Bernabeu and confessed to MARCA that the game no longer had anything to do with him and that he preferred not to talk about it.

"Now I'm only interested in PSG and I won't watch it," he said as he climbed aboard the ship that was taking him to one of the Doha ports, after the Qatar Winter Tour that Paris Saint-Germain attend every year.

Despite all the rumours that continue to suggest a possible transfer to Real, Neymar doesn't want to know anything about and wants to focuses solely on his new project.

Happy at PSG, he is nonetheless perplexed by some of the information that has appeared in recent weeks about a move to the Spanish capital - for the same amount which the French club paid for him.

Neymar has denied it but it would also be unfeasible because Ligue 1 prohibits buyout clauses.

The rumours of a future Real Madrid move for Neymar have grown in recent weeks, especially after Florentino Perez's comments at the Ballon d'Or ceremony, but PSG chief executive Nasser Al-Khelaifi has moved to kill the speculation.

PSG broke the world transfer record to bring the Brazilian to France in the summer and they have no intention of waving goodbye to the No.10 any time soon.

"It's impossible, there's no hope," Al-Khelaifi said when asked about the possibility of Neymar one day calling the Estadio Santiago Bernabeu home.

For now, the main focus for PSG is on beating Los Blancos when they face them in the Champions League last 16 next February.