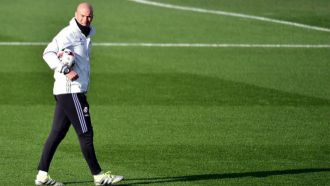 Zinedine Zidane is good at winning El Clasico; in the five that he has taken charge of, Real Madrid have won three, drawn one and lost one, equating to a winning percentage of 60 percent.

That is well above the above the average of many other Real managers who had more attempts during their various tenures.

The Frenchman has had more success in the Supercopa, beating Barcelona twice this season. A terrific 3-1 win at the Camp Nou was followed by a comfortable 2-0 at the Estadio Santiago Bernabeu in August.

From Munoz to Villalonga

Miguel Munoz has managed Madrid in more Clasicos than any other coach in its history. In his 36 encounters against Barcelona, he achieved 16 victories (equating to a win percentage of 44.4 percentages).

Second in the list is Jose Mourinho, who survived 17 Clasicos, despite winning a mere five times (resulting in a lower win percentage of 29.4%).

Third is Luis Molowny. The eternal caretaker from the 1970s and 80s fared considerably better than the irascible Portuguese, winning six of his 13 Clasicos to garner a win percentage of 46.1 percent .

Molowny was succeeded by Leo Beenhakker, who appears fourth in the ranking. The Dutch coach, who oversaw the explosion of the famed Quinta del Buitre, led eleven games against Barcelona, mustering only three wins (27.27%). He lost four and drew the rest.

Real Madrid icon Alfredo Di Stéfano is fifth in the ranking, winning just four of the ten Clasicos he managed in the dugout.

Another illustrious former coach, Vicente del Bosque, appears just below him, winning three of his ten matches against the Azulgrana.

Among the ten managers with the most matches against Barcelona in Real Madrid history, Zidane's closest challenger is Paco Bru, who was at the helm from 1939 to 1941. In two years, he led nine games against the Catalans, winning five (55.5 percent).

Since signing with Real Madrid, Luka Modric has become the face of the team and a key part of their major successes in the past years, and that is only set to continue into the Christmas Clasico.

Whenever the Croatian is at his best, with his precise vision and creativity, he produces a much more effective and dangerous Blancos side that can destroy any rival in its path.

His undeniable talent has helped Los Merengues lift LaLiga and the Champions League last season and his recent incredible performance against Gremio resulted in the Club World Cup title.

To Real Madrid's advantage, Modric is in his best form of the season ahead of the highly anticipated El Clasico.

Although the midfielder struggled a bit at the beginning of the 2017/2018 campaign, he is enjoying one of his best moments and the Spanish giants will be counting on his brilliance against Barcelona.

With the help of the Croatian genius, Real have recorded a historical year with five titles in only 12 months.

But Modric wants more. The 32-year-old is hungry for more trophies and is on the hunt for further success despite all his achievements so far with Cristiano Ronaldo and Co.

"We are ready and willing to make a great El Clasico," Modric said in the build-up to the derby.

"We want to win all the possible titles again. We are still alive in the league and we will give everything to try to win the title.

"There is also still a lot left to be played in the Champions League and the Copa del Rey, which we would like to win again."

After 13 titles at Madrid, Modric remains ambitious for more.

"My character is like that and I always want more," he indicated.

"Even if I am satisfied with what I have done, I always want more. While it lasts you have to enjoy it.

"That pushes me forward and it is part of my character."

Ahead of the vital LaLiga match on Saturday, the Croatian was confident the fans at the Estadio Santiago Bernabeu will encourage the team to win.

"In the big games they are always there supporting us," the footballer said.

"I hope they will create a great atmosphere and give it their all in the stands like us on the field."

Hopes of retiring at Real Madrid

Lifting La Decima is considered by Modric to be his best ever moment with the club.

It was his first ever Champions League title (before going on to win in Milan and Cardiff) and his triumph with Los Blancos served to silence all those who criticised his move to Madrid.

Now, five years later, no one doubts his quality and skills, as he has become a key figure for the team.

At 32 years old and with a contract until 2020, Modric aims to end his career in the Spanish capital. He dreams of hanging his boots at the club that has given him so much glory.

"I've always had confidence and knew that I was going to get very far," Modric explained. "Signing for Real Madrid and winning titles is a dream come true.

"There are not many players who have managed to hang up their boots with this team and let's see what happens.

Sergio Ramos is on red alert, the Real Madrid captain is no stranger to receiving his marching orders with a worrying record of being sent off no less than three times in the past nine matches against their bitter title rivals, Barcelona.

Last season, Ramos saw red at the Estadio Santiago Bernabeu for a rough foul on Lionel Messi, departing the pitch with 13 minutes left.

He was also expelled In the 2015/16 campaign, this time in a game at the Camp Nou. Madrid won the match 2-1, but their captain wouldn't be on the pitch to celebrate, sent packing in the 83rd minute for a second yellow card.

We have to go back to 2013/14 to find Ramos' other Clasico dismissal. It was another straight red this time, with Ramos bringing down Neymar for a penalty that was converted adroitly by Messi.

With such a penchant for reckless challenges, Ramos will need to keep his cool on Saturday. In Real Madrid's most important game of the season, they'll need their captain to lead the way.

Xavi: Victory for Barcelona would practically knock Real Madrid out of LaLiga race

Former Barcelona midfielder Xavi believes that they are the side in form going into the Clasico and that victory would virtually knock Real Madrid out of the LaLiga title race.

Xavi currently plays or Al-Sadd, in Qatar, and keeps a close eye on the Catalan club. He feels that the arrival of Ernesto Valverde this season has made them more solid.

"Valverde has made them look more like a team, the signings are doing well and everything more or less is positive," said Xavi.

"Barcelona are solid and they are well placed to win (the Clasico) which would practically rule Madrid out of contention for the title. Madrid are not playing so well but they have more confidence now since the Club World Cup.

"Valverde has given them attacking football, they pressure well and they aim to always have the ball. We will see how Madrid play and at times they are fine not having the ball while Barcelona will want to dominate definitely.

Xavi is sure Barcelona will want to respond now after they were heavily beaten in the Supercopa de Espana by Real.

"Revenge always exists and it was not good to see Madrid so strong in August," he continued.

"Barcelona have bounced back well and it has been incredible the way they have done it. The Supercopa defeat is not necessary to give them motivation as everyone has baited breath for the Clasico.

"The midfield now is more physical and gets forward. Paulinho is scoring goals and Rakitic is very versatile. Both can play with the ball and it is not only the typical ball players that have the possession.

"Madrid will have more pressure and possibly they will be more attacking as they need to win. For Barcelona it will be also important though to knock them out of the race for the title."

Xavi has the impression that Barcelona have gone back to their roots with Valverde.

"They are more balanced with Valverde and returned to their essence," he stated.

"Previously players were bought who were't to the Barcelona style and I think that now the Masia is understood better."

Manchester City are the team to beat in his opinion.

"They are playing the best football in Europe and Pep has got it right there. He is methodic and demanding, and the players are happy with him," he said.

"Pep is a one off, superb, a perfectionist and is able to transmit well. It is normal that new Barcelona trainers are compared weith him."