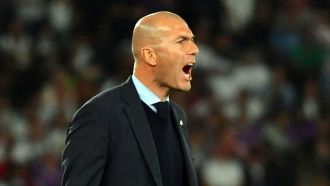 While at a loss to explain Real Madrid's difficulty in bypassing Club World Cup opponents Al-Jazira on Wednesday night, Zinedine Zidane did point the finger at a disruptive delay caused by the VAR system.

A first-half header from Casemiro was ruled out amid much confusion with Karim Benzema in an offside position as his influence on play was debatable.

"I have very few explanations," the Frenchman confessed post-match. "We deserved the victory, to go to the final, and that's what I'm left with.

"The first-half was very strange because it was very odd how we didn't score.

"But we had patience and we knew we were going to have chances. We have qualified in a way that was deserved. We had to have peace of mind and we won after a bit of struggle, but we won.

"We had to wait three or four minutes to get a decision and it wasn't pleasant.

"You have to make sure some good comes from all of this and that we try to improve it. I guess the offside was why it was disallowed. It seemed odd."

Zidane can claim credit for deploying Gareth Bale with the clock ticking, and the Welshman's late goal sets Real up for a final with Gremio.

"I watched their semi-final," he added. "I don't know the Brazilian league that well.

"They're a good team and we have to raise our level of play.

"It will be a tough game because there is no such thing as an easy match, as we have seen against Al-Jazira. Now, we have to rest."

Victory over Al-Jazira may have been tight in terms of the result, but in truth it was one of the biggest sieges in the history of the club, perhaps reflecting their woeful finishing.

In recent memory it is hard to think of a single game in which Real Madrid have enjoyed so many chances, with six shots in the first 10 minutes alone and an impressive 17 at half-time.

Yet Zinedine Zidane's team did not make the breakthrough until the 53rd minute. Even then, they had to rely on talisman Cristiano Ronaldo.

After the equaliser, the siege continued, creating and failing to convert chance after chance and, by the 71st first minute, they had created 28 chances at an average of one every two minutes and 42 seconds.

Amongst those chances were two disallowed goals and being denied by the woodwork on four separate occasions.

The desperation of Real Madrid, and especially their coach, was clear for all to see.

Everyone had thought that the thrashing of Sevilla with five goals in 45 minutes had put an end to their struggles in front of goal, but this game proved the complete opposite.

In the end, it was Gareth Bale who scored the winner with his first touch despite coming into the game having barely played for three months.

Victory for Real Madrid is a positive, but to have only scored twice with 36 shots with 14 on target, hitting the woodwork four times and having 19 corners, is less impressive.

Lionel Messi: I hope football repays its debt to me

Lionel Messi said that he will never forget the disappointment with Argentina at the 2014 World Cup but he hopes that football will bring happier memories in Russia.

The Rosario born player was instrumental in helping his side qualify for the 2018 competition and hit a hat-trick as they beat Ecuador away in the final round of matches.

Argentina coach Jorge Sampaoli claimed that football owes Messi a debt after Argentina failed at the final hurdle in 2014 and Messi laughingly agreed.

"I hope football will repay the debt," he explained in an interview with FIFA.com.

"I heard what Jorge Sampaoli said. In fact, he even told me himself."

The heartache which came from losing the 2014 final to Germany still lives on for the Barcelona forward, furthermore he doesn't see it ever fully going away.

"No, I don't think it will ever heal," he admitted.

"I think I'm just going to have to live with what happened, it'll always be there.

"The World Cup provides nice memories, but also some very painful ones."

Despite the fact the national team only just scraped into the tournament after a disastrous qualifying campaign, Messi believes the group will be a lot stronger by the summer.

"After the Ecuador game, the team feels different," he intimated.

"Argentina has let go of all the fear and tension that came with that match.

"This changes the atmosphere a lot."

Chile's failure to qualify has been one of the major surprises given their incredible recent success, especially in the Copa America.

The Barcelona forward himself admits he was left as surprised as anyone that they failed to progress to the Russian showpiece.

"Yes, I was as shocked as anyone because they have won the last two Copa America tournaments," he agreed.

"They are a great team with a number of fantastic players.

Manchester United couldn't finalise a deal with Atletico Madrid's Antoine Griezmann during the summer transfer window and Barcelona are said to have taken the pole position when it comes to the forward's future.

Los Rojiblancos' transfer sanctions resulted in the Frenchman staying in Madrid for another season, but the Catalans are ready to proceed with his acquisition next June.

According to The Independent, some of Griezmann's Atleti teammates have claimed that the capital of Catalonia will be the next destination of the 26-year-old starlet.

As reported by the English website, Ernesto Valverde's club are 'very far ahead' of the Red Devils in their pursuit to rack up the player's signature.

After Neymar's departure to Paris Saint-Germain, the Barcelona board seem eager to reinforce their frontline with another top quality player

Although the France international renewed his contract in June, a potential move hasn't been ruled out and Barcelona seem to be the favourites to secure his signature, while United may have already set eyes on other potential targets.

Simeone: Atletico Madrid need to be a live wire, we aren't like Real, Barcelona and PSG

Atletico Madrid coach Diego Simeone said that the team always need to be a live wire and on edge to have success unlike Real Madrid, Barcelona or Paris Saint-Germain who can cruise to comfortable wins.

Following a transfer ban last summer, Los Colchoneros weren't able to properly prepare for the current campaign and have found themselves weak in several positions.

"I get involved (on the sideline) when matches are on the edge, Atletico Madrid are like a live wire, it's not like at Barcelona, Real Madrid or PSG where they win 4-0," he explained in an interview with L'Equipe.

"The players feel what the coach demonstrates on the sideline, when a coach relaxes he then loses his team.

"The coaches who don't shout and scream are the ones who win 4-0."

One of the nuances of the sport which keeps the Argentine coach interested is the unpredictable nature of matches, something he feels is necessary to keep players on their toes.

"I like to be near the pitch, I like to win matches but also having the uncertainty of what will happen," he admitted.

"Whenever we start a game, I'm afraid.

"I also feel that when I was a player, fear and nerves make you better, they keep you alert."

Simeone believes over confidence and comfort are two of the biggest factors which will prevent a player from playing to their potential in any given fixture.

"Believing you are better than an opponent is poisonous," he intimated.

"The best mental state of a player is when he is nervous; it forces him to play to his optimum level."

Email : [email protected]
Προηγούμενο : The phrase that caused the fight at Old Trafford: Ibra, you talk a lot but you move a little | Επόμενο : Mbappe: Of course PSG can beat Real Madrid
Προβολές : 503
- 8007 προηγούμενη ημέρα