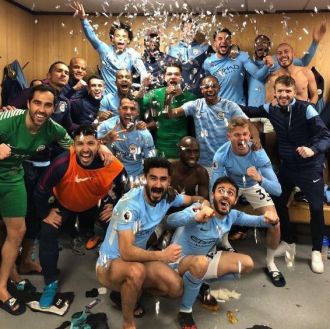 The phrase that caused the fight at Old Trafford: Ibra, you talk a lot but you move a little

The Manchester derby ended with an unseemly tunnel fracas between both sets of players and staff, allegedly caused by City players mocking United's Zlatan Ibrahimovic.

Some of the away team quickly made their way to the dressing room while other players and staff came into the tunnel dancing and singing.

Members of City's coaching staff, euphoric after the victory, picked on the Swedish striker.

"Ibra, you talk a lot but you move a little," was allegedly heard.

United took that as provocation and from that moment a brawl began in which at least 20 people participated. Plastic bottles were hurled in the melee, and punches thrown.

Pep Guardiola's team were loudly celebrating the win that put them 11 points clear of United in the away dressing room, and at that moment, Jose Mourinho apparently entered and asked for more respect and tact from the visitors.

However, his words did not sit well with City goalkeeper Ederson, who understood his Portuguese... and things took another nasty turn.

Mutual insults, jostling and a tremendous scuffle that included Romelu Lukaku throwing a bottle that hit a member of City staff, was the sum total of the second unsavoury incident in just a few minutes.

The Football Association have since asked both teams for their observations, and sanctions can't be ruled out as a result.

Valverde: It's a hard draw for Barcelona

Once the Champions League draw had been made, Chelsea-Barcelona was one of the standout ties, and it's a two-legged affair that Ernesto Valverde thinks will be tough for the Catalans.

That said, the Blaugrana will still face both games with the enthusiasm and work-rate that has defined their season so far.

"It's a hard draw for us but we knew that nothing was going to be easy because there were very good teams in the draw," Valverde said to Barça TV.

"Chelsea are the champions of the Premier League but we will play with enthusiasm because, although it will be difficult, it's a very nice tie for us and for the supporters.

"In that aspect, it's easy to motivate the players."

Valverde also gave an assessment of what sort of level he felt Chelsea were at, at this point.

"They're a strong team," he continued.

"With Morata, they have in speed in attack, and Hazard is very good between the lines."

During the first week in January, Real Madrid expect to complete the signing of Kepa Arrizabalaga with an offer of 25 million euros being made as soon as the transfer window opens.

The Spanish goalkeeper's contract dispute with Athletic Club has been a longstanding issue, he has been in negotiations for over 12 months and an agreement hasn't been reached.

With Los Blancos looking to plan for life after Keylor Navas, completing the signing of a hugely promising 23-year-old stopper with LaLiga experience seems like a no-brainer.

Kepa's current contract with the Basque club ends in June 2018, however with Spanish clubs unable to talk to domestic based players about Bosman transfers, the defending champions could be forced to pay his buy-out clause to avoid foreign interest turning his head.

Furthermore it's worth remembering that had the goalkeeper not signed a new contract, it was expected that Kepa would be placed in exile and his chances of going to the World Cup would have evaporated, although he isn't expecting to feature unless David de Gea suffers an injury anyway.

MARCA understands that from January 1, Kepa will be committed to the European champions for the next six seasons on a contract that will pay him 2.5m euros as an annual salary.

Florentino Perez has embarked on a policy of securing the futures of numerous talented Spanish youngsters and it should come as no surprise that this is a comparable salary with that of Dani Ceballos and Theo Hernandez.

Recently there was a change in tact from Athletic Club president, Josu Urrutia, in that he intimated that the club would be willing to meet all of the Spaniard's demands.

Now this extends to the salary he will earn in the capital, although many believe this to be a measure taken to justify the eventual sale to the club's partisan fanbase once it became clear a departure was unavoidable.

With the club set to participate in the Club World Cup hosted in the United Arab Emirates, Real Madrid will send their offer for the keeper once the club has finished their participation in the tournament.

There is no relationship between the two presidents, they simply don't get on, and this transfer is hardly going to help matters on that front.

Perez always looks to try and find an agreement with a club instead of paying a buy-out clause, which is why the club will make an offer which exceeds the value of the 20m eur clause as a sign of goodwill.

Many feel this is a pointless concession, however it's something that Los Blancos did in the summer by paying 29m euros to Atletico Madrid from Theo Hernandez and 16.5m euros for Ceballos from Real Betis.

Both of these fees were slightly higher than the buy-out clauses embedded in the players' respective contracts at that time.

Should Urrutia simply refuse to negotiate with someone he considers a sporting enemy, then the defending LaLiga champions will pay the buy-out clause amount and thus complete the signing with haste.

Luis Llopis, the club's goalkeeping coach, has been a huge advocate of the Spaniard and has pushed those in power within Valdebebas to make the move.

Kepa won't be cup-tied for the Champions League after having only played in the Europa League previously this term; the latter stages of the Copa del Rey are seen as the ideal opportunity to help integrate the likely new signing into the Real Madrid senior team.

Zidane: We want to win the Club World Cup and then we have six months for the rest

Real Madrid coach Zinedine Zidane is not worried about the club's slow start to the season and said that after the Club World Cup there are six months to win the other trophies they have earmarked.

Zidane's side are aiming to win their third trophy of the season at the Club World Cup having already picked up the European Super Cup and the Supercopa de Espana, and first up will be Al Jazira on Wednesday.

"It will not be easy and last year we had a lot of problems before we managed to win it," explained the Frenchman.

"There will not be easy games and for just being Real Madrid we are not going to win. We have time to prepare for the game and there are no excuses. This is the calendar and whoever we face we need to look at doing what we have to do well.

"It is normal that during the season you have ups and downs but what we have done so far is very positive. We have won two titles and and we are trying to win a third. After this we will have six months to fight for LaLiga, the Champions League and the cup."

Zidane claimed that it is unrealistic to expect Real to win all their games by big margins.

"Everyone wants Real Madrid to play well and win by four or five goals, it is the dream of all but at the end of the day it is no so easy."

Unai Emery: I don't think it's the worst possible draw

Paris Saint-Germain coach Unai Emery has made clear that he doesn't believe the draw with Real Madrid to be the worst matchup the French club could have faced.

The free-scoring Parisian side will head to the Estadio Santiago Bernabeu for the first leg in February with Kylian Mbappe and Neymar likely to cause the Spanish giants problems in defence.

"I don't think it's the worst possible draw," he explained.

"It's a good tie; we have the required level to play against Real Madrid.

"If you want to win the Champions League, then you have to face Real Madrid."

Los Blancos have suffered domestically his term with their lack of squad depth hindering their LaLiga efforts, as such Emery believes this his team has enough talent to overcome the defending champions.

"To beat Madrid, we will have to play with personality," he admitted.

"We have a lot of talent.

"This match will be the centre of the footballing world."

PSG's incredible goal-scoring form in the group stage illustrated just how serious a contender the French club are for the Champions League this term, the Spanish coach feels his team is ready for such a match with the Spanish giants.

"It's a positive draw," he intimated.

"The team is ready to play this match.

"We're going to work on things in order to be perfect when the match arrives."

Such sentiments were echoed by Thomas Meunier on social media shortly after the draw, the Belgian defender made clear that such difficult matches are all part and parcel of the latter stages of the tournament.

"Why do we have this bad luck? Is it possible to have optimism?" his tweet read.

"This isn't the last 128 of the French cup; we have to come through this if we want to reach our objective."