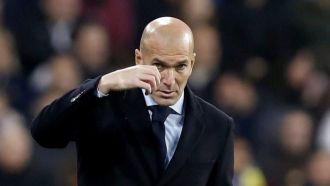 Zidane: I am convinced that Real Madrid will be fine by February

Whilst victory over Borussia Dortmund sees Real Madrid end the group phase on a positive note, it is difficult to get away from the problems that have plagued Los Blancos' 2017/18; however Zinedine Zidane remains convinced that things will turn out well.

The French coach has done an incredible job of remaining positive in the face of criticism this term and this must trickle down to the players and keep their spirits up.

"I am convinced that by February, we'll be fine," he explained in his post-match press conference.

"After the break, we'll be okay; we are looking forward to the draw on Monday even though a difficult opponent is coming.

"I don't care what team we play, this doesn't take place until February."

Despite his upbeat mood, problems continue to mount up for the former Juventus midfielder as Raphael Varane was forced off through injury on Wednesday.

The defender has struggled through many injuries in the past and thi is a further setback, although the full extent is not yet known by the coach.

"He has hurt himself and we have to wait the scan results that will come tomorrow," Zidane intimated.

"He doesn't think it's a serious problem, but he is definitely out for Saturday.

"We will find a solution. Marcos Llorente can play there, he has done it before."

The manner in which injuries have decimated Los Blancos' LaLiga campaign in the first half of the season has been damning, as such it is expected that the club will be busy in the January transfer market, something which Zidane feels is a possibility.

"There is a possibility we will do business," he confirmed. "From January 1 to January 31, we can sign players.

"We'll have to see what happens, we have this opportunity every year and we always take stock and see what's possible."

Keylor Navas continued his return to action following an injury layoff; however speculation surrounding the possible signing of Kepa Arrizabalaga in January has ensured the Costa Rican's future remains an issue for some.

"Keylor is back and I think he played well," he admitted. "As I always say, the players can always give more.

"Regarding signings, I have two goalkeepers and I'm very happy with both of them."

With progression to the knockout stage assured, the road to the Kyiv begins in earnest as the Spanish giants face up to perhaps winning a third successive European crown, although the Frenchman made clear his team are far away from the requisite level to achieve such a feat.

"We're very far from that, I don't even think about it as a possibility," he admitted.

"The important thing was to get through to the knockout stage, we've done that.

"Now we have to focus on LaLiga and the Club World Cup, there is plenty of time for the Champions League."

Borussia Dortmund's visit was always going to produce an entertaining match given their attacking style; the fans at the Estadio Santiago Bernabeu were not left disappointed by a dramatic 3-2 victory for the hosts, although Zidane feels the enforced defensive switches hindered his side.

"We started the match very well and scored two good goals," he stated.

"Then with Varane's injury we had problems. The last half hour was good, putting Lucas back in his best position was key."

Messi: I've realised that sometimes not playing is for the best

At 30 years of age, Lionel Messi is coming to terms with occasionally being rested with Ernesto Valverde not afraid to rotate the forward of late.

In both the Champions League ties with Juventus and Sporting CP, the Argentine was initially restricted to the bench and he insists that he's happy with that.

"I have learned that the season is long, that there are times which are harder than others because the years fly by and now my body pays the price for playing in so many matches," Messi admitted to TyC Sports.

"I realised that sometimes not playing is for the best."

Looking ahead to the World Cup, Messi indicated that Argentina have a few small steps to take if they are to answer their critics with a trophy in Russia.

"We went through a tough spell," he noted. "But it's true that we have to improve if we aspire to be world champions.

"As we are today, we are not far from that although there are better teams than us such as Brazil, Germany, France and Spain.

"The criticism went beyond normal and went beyond football. The bitterness we feel is because we know what awaits us if we do badly.

"People want results and, if they don't get results, they want new faces."

Previous indications that the Barcelona star will head to his homeland to finish his career are now seemingly in doubt as the forward fears for his family's safety in South America.

"I've said many times that my dream is to play at Newell's but I don't know what will happen, and a part of that doubt is due to the way the country is at the moment," added Messi.

"I have a family and my children come first, and then me. I want them to grow up in a calm place, being able to enjoy life with security.

"It is very ugly to see the things that happen in Argentina, that you can go out on the street and people want to rob you and that they can kill you."

Dembele back in training with Barcelona

For the first time since being operated on, on September 19, Ousmane Dembele returned to Barcelona training.

He participated in a rondo, one of the usual routines of individual technique that Barcelona teams have been using for years.

Afterwards, the Frenchman continued with his re-adaptation work and did a circuit.

Dembele was injured on September 16 at Getafe and three days later he travelled to Finland to be operated by specialist Sakari Orava.

His ruptured tendon in the femoral biceps of his left leg was a complex injury that required a very prudent recovery.

The recovery period was calculated at three and a half months, and two and a half have already elapsed since the operation.

Therefore, the striker should be back to A1 condition by the first matches of the new year.

Both continued with their recovery processes, while Valverde has recovered Arda Turan after different physical problems that the player had in recent weeks.

Palencia, Alena, David Costas, Jose Arnaiz and Oriol Busquets from Barcelona B, as well as the goalkeeper of the U19A squad, Inaki Pena, completed the group.

Manchester United midfielder Paul Pogba will miss Sunday's derby against Manchester City but he has backed his team mates to end their local rivals' unbeaten run in the Premier League this season.

Leaders City will equal the all-time English top-flight record of 14 consecutive victories with a win at Old Trafford and extend their lead over second-placed United to 11 points.

Pogba, who is serving a three-match domestic ban after receiving a red card in the win over Arsenal, said United must be ruthless in front of goal if they are to record their first win in three league games over City.

"I have complete trust in the team. Even if I'm not there, I'll be there watching the game, giving positive energy and, hopefully, we're going to win," the 24-year-old told reporters.

"You need to kill the game when you have one chance because they are City and they have quality as well up front and they can kill the game at any time.

"They're first for good reason, because they've been doing great at the start of the season. They keep winning, they didn't lose one game and obviously, mentally, they're very strong. We need to be as good as they are, mentally."

Pogba played 90 minutes in United's 2-1 Champions League victory over CSKA Moscow on Tuesday, providing an assist to Romelu Lukaku who netted only his second goal in last 13 games in all competitions.

"For a striker to score a goal it gives him positive energy as well (as confidence). He (Lukaku) need this," Pogba added.

"He deserved it because he's been working very hard for the team and obviously we know how important he is for us. We are going to need him as well for the derby."