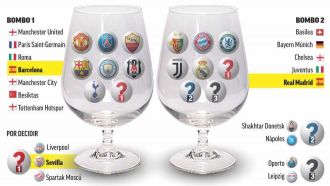 Barcelona could face Chelsea in the last 16

Champions League fans now know 12 of the 16 teams who will be in the draw for the last 16 of the competition, with Chelsea and Roma providing a surprise in the final game on Tuesday night.

Manchester United, Paris Saint-Germain, Roma, Barcelona, Manchester City, Besiktas and Tottenham are all confirmed as first in their groups.

The eighth side is likely to be Liverpool, provided they can beat Spartak Moscow at Anfield on Wednesday.

Three more teams will join them, with Sevilla guaranteed at least second if they beat Maribor, whilst Shakhtar only need a draw against Manchester City and Porto will go into the pot with a win at Monaco.

Already, speculation has begun about who could face who.

If Liverpool secure first place, then Chelsea will only be able to face one of three teams: PSG, Barcelona or Besiktas.

The possibility of Barcelona facing Antonio Conte's team has increased and the Catalans will also be desperate to avoid playing Jupp Heynckes' Bayern side.

Real Madrid won't have it easy after only finishing second and they are likely to face one of PSG, Manchester United, Manchester City, Liverpool or Roma.

Sevilla are yet to confirm their final position, which could put them into the same situation as Real Madrid if they finish second, but a first-placed finish could see them extend their run if they can avoid Chelsea or Juventus.

The last 16 draw will take place on Monday December 11.

Simeone: We took more points off group winners Roma than off Qarabag

After a 1-1 draw with Chelsea saw Atletico Madrid knocked out of the Champions League in the group stages, Diego Simeone reflected on a poor European campaign and the irony of Roma's win against Qarabag taking them top of the group.

The only team that Atletico did beat in their group stage catastrophe was, in fact, the team who finished in first place in Group C.

"We took more points off the top team than off the bottom team," he stated.

"We showed strength and were a competitive team.

"We go out having taken four points off the first-place team, but we are paying for the games against Qarabag."

The coach had no criticism of his team for their display in London.

"We wanted to close our game, we were searching for it until the end even knowing that Roma were winning," he said.

"The team only looked ahead and that will help us beyond the frustration of not being of the next round, it's a next step."

On the Europa League, which Atletico will compete in after winter, Simeone is ready for the challenge.

"We will focus on the Europa League and LaLiga," he said.

"It's our responsibility to play what we play."

Next up for Simeone and co. is a visit to Real Betis this weekend.

Zidane: With six months to go, there is a lot of time for Cristiano Ronaldo

Another weekend without scoring meant Zinedine Zidane faced the same volley of questions ahead of Real Madrid's match against Borussia Dortmund, and the coach continued to back Cristiano Ronaldo.

While it's undoubted that the forward has struggled for goals in the first half of the campaign, Zidane is confident that, like last season, Ronaldo will end the campaign on top form.

"I think Cristiano deserves more respect, he's so great that when things don't come off it's normal for people to talk about him," the coach stated at his pre-match press conference.

"Those who love Cristiano, and the club, know what he is doing.

"A short time ago, last year, he had a phenomenal season. We are halfway through this one, there are still six months to go.

"Six months is a very long time with Cristiano."

A 0-0 draw at Athletic Club on Saturday night meant Real failed to take advantage of Barcelona's slip-up on the same day, and Zidane is urging calm in the face of these bad results.

"[Criticism] doesn't bother me, really. It is the reality of our work," he added.

"We have to be calm, I'm not going to change. What I will say is that, in the end, we will be up there."

With the January market approaching, many have began speculating who Madrid will seek to purchase but the French coach is publicly happy with the players currently at his disposal.

"I'm very repetitive and I get tired of saying the same thing," said Zidane.

"I think my team is doing well. It's true that we have to score more goals but when things aren't adequate, I remain calm, because I know that sooner or later things will change.

"We are playing well in games and it doesn't matter what those outside the club are saying.

"I see things that other people may not see. They can say what they want, but sometimes they forget everything we have achieved.

"As the coach, this situation is not ideal, but we will improve and in the end we will be up there."

Gareth Bale won't be fit to face Dortmund on Wednesday however his chances of playing against Sevilla on the weekend are not over yet.

"I don't know when he will play," added Zidane.

"Against Sevilla, it will depend on when he can train.

"He is working on the pitch, but still away from the team. He'll go to Abu Dhabi with us, that's for sure."

Los Blancos face Borussia at 20:45 CET and the Champions League group closer is a dead rubber, with Real already guaranteed a second-placed finish.

Chelsea may have offered Eden Hazard a new contract worth 340,000 euros per week, close to 18m euros a year, yet the Belgian isn't willing to renew his deal with the club, at least not at the moment.

Given that his current contract runs until June of 2020, he does not feel there is any need to rush into a fresh commitment.

This is according to The Times, who reported this Tuesday on the offer Chelsea have put on the table.

Like teammate Thibaut Courtois, Hazard will hold off putting pen to paper for now, waiting to see if Real Madrid, a club which long admired him, make a move.

Bale aims to be back for the Club World Cup

Real Madrid returned to the training pitch on Monday, but Gareth Bale did not, still suffering from his latest injury.

He'll miss out on the Borussia Dortmund game in midweek and is expected to be unavailable for the Sevilla clash at the weekend too, but the Welshman is hopeful of being back in time for the Club World Cup in the United Arab Emirates.

The semi-final of that tournament will take place on December 13, ahead of a potential final on December 16, and the forward hopes to be able to take part in both games and to help Los Blancos towards a sixth world title.

Of course, there will be no rushing him back and if he continues to feel pain in his calf then he won't be risked.

Bale himself is the keenest for this injury nightmare to come to an end, but he wants to come back well, without any risk of a further relapse.

Email : [email protected]
Προηγούμενο : Conte: Atletico are a great team, we must respect their players and coach | Επόμενο : Zidane: I am convinced that Real Madrid will be fine by February
Προβολές : 549
- 7798 προηγούμενη ημέρα