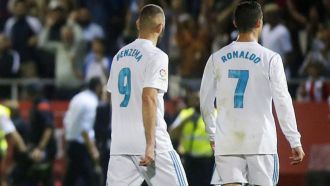 There is a problem with the football at Real Madrid this season, particularly as Cristiano Ronaldo and Karim Benzema have been misfiring badly.

It isn't a character issue for the team but the men who have been key to recent successes have largely been peripheral figures.

Coach Zinedine Zidane has been unable to find the answer and returned to the starting line-up which took to the field in Cardiff and won the Champions League final.

It was an experiment that didn't quite work, despite Real regaining their defensive solidity with the return of Sergio Ramos, who walked the tightrope once more before ultimately being sent off in the closing stages.

Real are giving the impression of a team who have lost their way to a degree.

Dani Carvajal is back now on the right flank but on the opposite side, Marcelo hasn't been up to the task.

His final ball has been disappointing and that spark which made him one of the world's best in recent years has been missing in his game.

In midfield, confusion is evident when Isco has to come so deep that he's collecting the ball from Keylor Navas on the edge of the Real penalty area.

Of course, on Saturday night, he did manage to cause some moments of panic at San Mames in the home defence.

Luka Modric improved as the game went on, something which cannot be said of his midfield colleagues Toni Kroos and Casemiro.

Another major aspect of their play which was sorely missed was simply doing damage in dangerous areas, and Los Blancos could never come up with that killer final ball.

However, the biggest problem for the club to deal with appears to be in attack.

Ronaldo and Benzema are trying and working hard but that isn't a valid argument for them to retain their place in the side and be certain starters in this system again.

Their form is far from their best and in 14 LaLiga matches this season, they have just four goals between the two of them.

Of course, Gareth Bale's injury has done a lot of damage in this regard, skewing all of the club's best laid plans.

A special mention is also reserved for Zidane.

He waited until the 80th minute to go to his bench and, in his opinion, all the team was missing was a goal.

It may seem obvious, but if a goal hasn't arrived by a certain point in the game, then an alternative route for finding it should be looked for - and he didn't do so it until it was far too late.

The big problem is that those four goals from Ronaldo and Benzema have left Real Madrid in an extremely precarious position in the league.

When you consider that on Saturday a big chance to cut the gap was missed after Barcelona drew at home to Celta, it leaves a sour taste.

Griezmann has found his lethal touch

All talk of a crisis is history, Antoine Griezmann is back and he has found his lethal touch in front of goal, scoring yet again in the 2-1 victory over Real Sociedad.

He looks happy playing football and his goals are propelling the Madrid club forward in their domestic campaign.

In a clash against his old team, Griezmann showed no mercy with an 88th minute winner and heading into the midweek clash with Chelsea, he is in fine fettle in front of goal.

The Macon-born forward was alive at the back post and quickly poked the ball home following a pass from Saul Niguez.

Over the course of his last three matches, he has scored four goals, including a wonderfully acrobatic strike in the Champions League against Roma.

Prior to this streak, the 26-year-old was in the worst period of his career, and never before had he endured such a torrid start to a season.

No longer are there suggestions that a move to Manchester United is imminent, Griezmann focusing only on Los Colchoneros.

Saturday's winner was the fourth time he has scored against his previous club and he elected not to celebrate in order to show respect to the club who gave him his break in Europe after being cast aside by Olympique Lyon as a schoolboy.

"I am happy because the victory will give us confidence," he explained in his post-match interview.

"The goal didn't look like it was coming, but the drive of the supporters took us to the three points."

The French international is now just 10 goals shy of a century for Los Rojiblancos, currently standing as the 14th all-time scorer in the club's history.

Guardiola: Late City victories 'show what we are'

After late victories against Huddersfield Town and Southampton, Silva scored with seven minutes left on the clock for a City side who, in cantering to an eight-point lead, are showing all the hallmarks of champions-elect.

For large periods on Sunday, however, City were frustrated by an organised West Ham but their sheer will to win proved too much for the Hammers as Guardiola's side restored their comfortable lead ahead of next weekend's Manchester derby.

"It's a big victory," Guardiola told the BBC. "It showed what we are.

"It was similar to the last few games, in the second half I thought we would score. It was massive. They played 10 players inside the box, it was almost impossible.

"We started really well but we lost our patience. We didn't have any rhythm because (West Ham goalkeeper) Adrian was taking 30 seconds every time.

"But you have ups and downs -- what is important is that in the second half it was outstanding the way we played. It means we have done 39 points in a row. That is a lot. You see how they run and how they fight, that's why we are so proud again."

Guardiola has favoured a lone striker this season, with either Sergio Aguero or Gabriel Jesus deployed at the head of their fluid, interchangeable attacking system.

But City played both in the second half on Sunday as they laid siege to Adrian's goal and Guardiola said the performance of the Argentine and Brazilian in tandem had given him plenty to consider.

"You have to try to solve it (when teams pack the defence). We had two strikers in the second half and that helped, it was a big lesson for me. We created more with two," he said.

"The pace was better, we had more presence in the box. Kevin de Bruyne playing as the holding midfielder gave us the tempo. We were much, much better."

City have been in irresistible form this season but it appears that teams may have identified a potential Achilles heel in their defence at set pieces.

Angelo Ogbonna's opener for West Ham came directly from a corner, as did the goal that City conceded against Huddersfield last week, while Southampton troubled them from set pieces during the week.

Against an imposing United lineup that includes Romelu Lukaku and Nemanja Matic, the leaders could have their work cut out next week against master-tactician Jose Mourinho.

"We spoke a lot about defending set pieces but they are taller," Guardiola added. "It will happen again next week against United so we have to try and concede fewer set pieces."

Conclusion: Real Madrid need to sign a forward much more than a goalkeeper

Real Madrid didn't manage to take advantage of Barcelona's slip when they travelled to the Estadio San Mames, providing further evidence of their serious problems in attack, with a poor all round scoring contribution.

We are already in December, a month before the winter transfer window opens, and it is likely to be one in which Los Blancos look to reinforce the team, given the poor standard of the side's performances.

If something was clear at San Mames it was that the side need a striker, a No. 9 who can provide the goals that Alvaro Morata did, before they even think about strengthening between the posts and providing competition for Keylor Navas.

He kept a clean sheet against the man tipped to arrive, Kepa, and although he performed well and is a big star for the future, Zinedine Zidane has already insisted that Navas is 'his goalkeeper.'

The stats when it comes to Real Madrid is devastating.

They hadn't failed to score in two straight away games since September 2011 when they drew blanks in a 1-0 loss to Levante and scoreless stalemate at Racing Santander.

Athletic were like a wounded lion after their incredible Copa del Rey collapse against Formentera but instead of licking their wounds, they went after Real from minute one to show their fans that they were determined to put things right, and were furious about crashing out of the cup.

They suffered but were well equipped to deal whatever Real threw at them, and Los Leones ended up with a priceless point to show for it.

Sergio Ramos is a leader, that is indisputable.

He played with a broken nose, protected by a mask, and took it off as he looked to head his side in front.

He wanted to drag the team up from the canvas and was his usual physical self because, as he said, he would bleed a thousand times more for the jersey.

However, he ended up being sent off once again even if it did seem unfair.

Real Madrid have to love Ramos the way he is because he has always given much more than he has taken away.

It was already discussed on the night that Athletic played Barcelona and we bring it up again.

Raul Garcia is always fired up and seems to perform above himself in every high pressure game for the Bilbao side, particularly when it is against Real Madrid.

His collection of confrontations, insults and protests against Madrid were enough to fill an album.

He was constantly involved and it was perhaps miraculous that he didn't see yellow in the end.

The post frustrated the visitors on more than one occasion as it denied the league champions the opening goal in each half.

Karim Benzema volleyed against the upright after Isco set him up, while Cristiano Ronaldo unleashed a lethal left foot drive against it late in proceedings.

It was evidence though that before they consider signing a goalkeeper, Real need a striker.