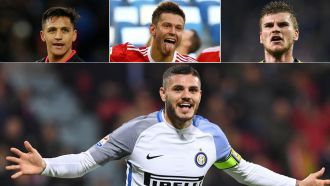 As the winter transfer window approaches, Real Madrid are considering reinforcing their frontline and Inter star Mauro Icardi tops the list of the forwards who have attracted Los Blancos' interest.

The Argentine striker has already scored 15 goals in 14 matches this season for the Italian team, who have set his price tag at 100 million euros.

The Milan club want to renew the player's contract until 2023, offering him 7m euros per year, but Real continue to keep a close eye on him.

The Spanish club, however, acknowledge that during the upcoming transfer market it will be hard to find a player that will make the difference, and they would prefer to avoid mistakes made in the past.

Arsenal's Alexis Sanchez is also on the club's radar, although the player prefers a reunion with his former coach Pep Guardiola at Manchester City.

Moreover, Timo Werner and Fyodor Smolov are also included on Real Madrid's wish list and have been thoroughly assessed by the club.

Real's underwhelming first stretch of the season has brought unease to the club administration, who have decided to re-assess the current squad after the derby against Barcelona and figure out their next steps during the winter market.

After coming off the bench to send Real Madrid into the next round of the Copa del Rey, Gareth Bale is set to miss the weekend match at Athletic Club.

At the final whistle on Tuesday night, the Welshman felt discomfort having not played in two months due to a collection of injuries.

Therefore Los Blancos feel no need to risk him when they travel to Bilbao on Saturday, even though Bale demonstrated how instrumental he can be for his team when introduced against Fuenlabrada.

It is hoped that the winger can be fit for the following midweek dead rubber against Borussia Dortmund in the Champions League, which would provide a good opportunity for more minutes under his belt.

While this is a minor setback, it is not the recurrence of any previous injury and Madrid are willing to show patience in their desire to get Bale back to top condition for the first time in a while.

Neymar's father: Neymar to Madrid? I can't talk about something that does't exist

Rumours continue to circulate that Neymar could end up at Real Madrid, but the player's father has sought to put a definitive end to them.

During an interview, Neymar Sr. denied there was any interest from Los Blancos to purchase the 25-year-old.

"How can I answer that?" he said to Fox Sports Brazil when the question was put to him.

"I can't talk about something that doesn't exist.

"How can he go to Real Madrid? What sort of a question is that?"

He commented in a tone that left nobody in any doubt as to his annoyance.

However, he didn't close the door either.

"Today we don't have that thought [that Neymar signs for Real Madrid]," he continued.

"Answering that is feeding an idea that is not possible, I simply can't talk about a negotiation that could happen in five or six years time."

"Neymar has a long contract with Paris Saint-Germain and has only just arrived.

"We are three months in and already a move is being talked about.

"It's difficult for people to respond to this type of thing."

Neymar Sr. also referred to the words of his son, who said he could eventually return to Brazil and wear the Flamengo shirt.

"He himself talked about that," the player's father noted.

"Neymar has an international career and at the moment I see it would be difficult to leave Europe.

"Our job is to keep Neymar's career at where he dreamed of playing.

"That was in Europe and he is there, and he will develop his football there.

"He can reach Palmeiras, Flamengo or Santos of course, but I can't foresee it at this moment."

When Neymar cried at Tite's words recently, it showed his human side according to his father.

"Neymar had a lot of feelings at the time that he was asked to speak," he said.

"People have to realise they need to be careful.

"The media are there to give news.

"On the other hand, they have a human being in front of them and not everything that is said is true.

"There comes a time when, however much experience Neymar has, however strong he is, there will be emotional moments.

"You saw that came at the press conference because Tite really knows him, they live together, they work together..."

Zidane should hand Marco Asensio the keys to the Bernabeu

Some have openly pondered at various points over the season what Zinedine Zidane sees in Lucas Vazquez. It's not that the 26-year-old is a bad player, in fact he has proven himself as an effective option for Real Madrid over the past two years. It's just that many perceive there to be better alternatives.

Indeed, Vazquez has become something of a favourite for Zidane, starting in the 3-2 win over Malaga on Saturday. His place in the team wasn't quite as contentious as it might have been, with Marco Asensio and Gareth Bale sidelined for the game through injury, but nonetheless, it underlined for many how Vazquez is so frequently picked over the former, in particular.

Asensio has become something of a peripheral figure at Real Madrid over the last few weeks and months. He was a real difference-maker earlier in the season, with his form making him undroppable. There was a sense that Zidane had himself a homegrown Galactico on his hands, illustrated by his double over the two legs of the Spanish Super Cup (particularly the stunner he scored in the second leg).

But why has Zidane seemingly lost faith in one of the brightest young players in the European game? Real Madrid are, after all, in need of a spark in attack. Karim Benzema might have rediscovered his goalscoring touch over recent weeks, with Cristiano Ronaldo also chipping in against APOEL Nicosia and Malaga, but they remain laboured in their forward play. Asensio has the ability to shake things up.

He showed that in the space of just 15 minutes against Atletico Madrid. Having been left out of the line-up for the derby, the youngster created the best chance for the game for Ronaldo after being introduced off the bench. It was illustrative of how for no particular reason, Zidane seems not to trust him on the big occasion. It's a bizarre stance to take given that the 21-year-old has scored in a Champions League final, a European Super Cup final and more than one Clasico.

Such is the puzzlement over Asensio's current situation, on the outside looking in on things at Real Madrid. Pretty much every elite Premier League side has been linked with a move for Asensio of late, with Manchester City the latest to be reportedly interested. Regardless of whether there is weight to those reports, it's just another illustration of how grave many see Asensio's position at Real Madrid.

Some have drawn comparisons to the way Alvaro Morata was treated last season, with the striker eventually leaving to join Chelsea amid frustrations over a lack of game time at the Santiago Bernabeu. Asensio rejects those comparisons, but the parallels are there for all to see.

"Morata's case is very different [than mine]," Asensio recently insisted. "When he returned to Madrid, he wanted to be more important. I am 21, just starting out in this game I always want to take advantage of the playing time I get from the coach, whether 15 or 20 minutes, or when starting, so that I can be counted on for important games in future."

It's not so long ago that Zidane was comparing Asensio to Lionel Messi, or at least his left foot. "Zidane told me that since Messi, he had never seen a left foot like mine," the 21-year-old revealed in an interview just two months ago.

A lot has changed since then, though. It's true that Asensio has suffered a dip in form, but that's to be expected of such a young talent. His unpredictability could be precisely what Real Madrid need at this time.

And so when he returns from injury, Zidane will surely look to give the attacker more first team game time. Otherwise, his potential as the vanguard of European football's next generation could be wasted.

These years are crucial for his development, but true greats start young. Asensio doesn't just possess the potential to be a star for Real Madrid in the future, but a star for them right now. He could be what they need to continue the turnaround of their season.