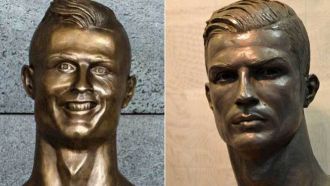 Latest Cristiano Ronaldo statue revealed: Is it better than the last one?

Jose Antonio Navarro Arteaga has unveiled his bronze immortalisation of Cristiano Ronaldo, coming in at 60 kilogrammes and almost a metre high.

This new bust of the Real Madrid forward is set to enter into the club's museum and has drawn comparisons to the efforts of Portuguese sculptor Emanuel Santos, whose statue of Ronaldo sits outside Madeira airport.

Zidane: I want to see Cristiano Ronaldo, Bale and Benzema back together

With Karim Benzema and Cristiano Ronaldo unable to find consistency in 2017/18, the Blancos boss may well be eyeing up Bale's comeback against Fuenlabrada as a chance for Real's chief scorers to turn the page.

"But I do want to see all three, Cristiano, Bale and Benzema, playing together, because I haven't seen them play together for a long time.

"[Bale] will be with us tomorrow. The idea is for him to play [against Fuenlabrada]. I want to see Bale at one hundred percent as soon as possible, but I cannot say when he will be at that stage.

"I think he's doing well. The main thing is that he has to play and it's in the full flow of the game that his next step will become clear for us.

"The idea is to play tomorrow, but we'll have to see how much."

With LaLiga still reeling from an embarrassing night at Estadio Mestalla, Zidane gave his take on goalline technology.

"It's expected to be implemented, we all know that technology changes things and it's a system that will improve football," he added.

"I'm not going to go into [the controversies], you're always looking for them and I don't want to. I focus on my team, there are many others who want to talk about that."

Reports have continued to push forward the idea of Madrid entering the January market in order to solve their early season struggles and Zidane admitted that signings are a possibility.

"It can happen, nothing else," insisted the coach. "I am very happy with my squad and I don't want anyone to leave.

"But then in football anything can happen, and there are other people than me to dictate these things.

"When the market begins, we will talk. They talk about a forward or a goalscorer, I won't talk about anything.

"We know we can make signings, but nothing else."

Bale returns to Real Madrid line-up after 63 days: It's been tough

While Zinedine Zidane is to use the Copa del Rey second leg match versus Fuenlabrada to test out a number of youngsters, Gareth Bale is the headline name of a trio of stars returning from injury.

Along with Keylor Navas and Mateo Kovacic, the Welshman will start against the Segunda B outfit having spent the last 63 days on the sidelines.

Initially falling foul to a fibrillar rupture of his calf muscle when facing Borussia Dortmund on September 26, Bale's return was then delayed by a similar problem to his hamstring.

"Great to be back in training with the guys, been a tough month but working hard to get back out there," he tweeted ahead of the game.

When looking ahead to Tuesday's game, coach Zidane insisted that Real Madrid's BBC attacking setup is again at the forefront of his mind.

"But I do want to see all three, Cristiano, Bale and Benzema, playing together, because I haven't seen them play together for a long time," he told reporters.

"[Bale] will be with us tomorrow. The idea is for him to play [against Fuenlabrada]. I want to see Bale at one hundred percent as soon as possible, but I cannot say when he will be at that stage."

A bookmaker will pay out on a Barcelona win at Mestalla

At least one betting house will be paying out on a Barcelona win at the Estadio Mestalla on Sunday.

The furore surrounding Lionel Messi's 'ghost goal' will go on for some while yet, but with it being so obvious that a goal was actually scored, some punters will be happy.

A bookmaker in England considered that the goal was a perfectly valid one and will also pay out on Messi being first scorer against Valencia.

In a statement, the bookmaker confirmed their stance on the matter.

"In a gesture of good will and justice to our clients, we will not only pay the benefits to those who bet for the draw, but also those who bet on a Barcelona win."

In addition, bets on Rodrigo as first scorer will be paid too.

Juventus striker Gonzalo Higuain has had surgery to mend a fracture in his left hand, the Serie A club said on their website (www.juventus.com) on Monday.

The Italian champions did not say when Argentine Higuain, who was on the bench with his hand wrapped but did not play in Sunday's 3-0 home win over Crotone, suffered the injury.

"Higuain's return date to team action will be defined over the coming days," Juve said in their statement.

Italian media expect Higuain to miss Friday's visit to his old club Napoli, who are top of the table two points ahead of Inter Milan and and four points clear of third-placed Juve.

Juventus coach Massimiliano Allegri has played down the importance of his team's match away to arch-rivals and Serie A leaders Napoli on Friday. Juve, aiming for a seventh successive title, are third in Serie A and four points behind Napoli, however Allegri said that the odd point here or there did not matter at this stage of the season.

"The target is to get to March, still be in touch with the leading group and be ready for the final sprint," he said after Sunday's 3-0 win over Crotone.

"We have played some excellent football, and Napoli have been extraordinary, but it's a long season and it doesn't really matter at this point whether you are a couple of points ahead or behind."

Allegri pointed out that Juve's own form had been impressive with 11 wins, one draw and two defeats in 14 Serie A games.

"It's not as if we are 27 points off the lead, it's just four points behind two teams who are unbeaten," he said.

"We dropped points with Atalanta, where we just stopped playing after going 2-0 up, and we had a black-out and lost focus for eight minutes against Lazio."