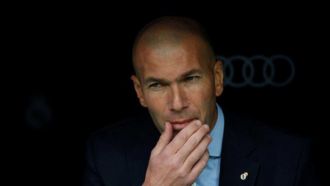 What seemed like a closed transfer market for Real Madrid with no option to open, has now changed, Zinedine Zidane noting after the win against Malaga that anything is possible now in terms of new players arriving in January.

President Florentino Perez rarely buys in mid-season but his plans have been altered.

MARCA can confirm that the option to purchase new players in the first month of 2018 exists, but as long as a series of conditions are met.

Zidane and the club's leaders are not entirely satisfied with the performance offered by the team.

They believe that the group must and can improve, but finding a solution in the market has become a possibility.

The coach doesn't want any of the current players to leave, but should a player arrive it wouldn't be a surprise that those who have had fewer minutes could go and look for the opportunities they don't have at Real Madrid.

Players such as Borja Mayoral or Marcos Llorente.

Zidane will always put the stability of the group ahead of everything else and so doesn't want elements within that can disturb the order and coexistence.

There are positions that are causing alarm however, such as the goalkeeper, centre-backs and forward line.

In the case of the first, the health of Keylor Navas will ensure the advance of a signing that was surely going to be made next summer.

It's a priority for the club and they are already working on it.

On the central defensive issue, Vallejo's response has been positive, but Zidane believes it is a position that needs to be reinforced shortly.

The issue of the strikers is more complicated.

There is a 200 million euro kitty to sign a world class forward but that will not be used in the winter.

That said, if a player such as Mauro Icardi is available, Real will go for him.

The Argentinian can play in the next round of the Champions League, which is an essential requirement and makes his capture favourable.

Valverde: Barcelona had a goal count against Malaga when the ball went out

Whilst a 1-1 draw away from home to one of your title rivals is never a bad result, Ernesto Valverde was left to rue an incredibly poor refereeing decision, but the former Athletic Club coach also made clear something similar happened against Malaga which went in their favour.

"In our game against Malaga, we had a goal count when the ball had clearly gone out," he explained in his post-match press conference.

"We all agree that in these very clear plays, you don't need the replays.

"However, we are still facing these moments where a ball crosses the line and it can't be seen."

The match was an incredibly intriguing battle between two well matched teams and Valverde felt that his team couldn't quite get to grips with Los Che's counter attacks.

"It was a hard fought game," he admitted.

"We were exposed because they are great on the counter attack.

"We know they are a strong team at home and in the end we earned a draw, it was a good game."

Balance is incredibly important in a football team, and that's what helped Barcelona recover from the hosts taking the lead through Rodrigo Moreno.

"With the balance we have, we had to be very attentive to their two strikers," he intimated.

"They have good players, especially Guedes who is excellent.

"We did a good job to recover, we could see that we only needed one key moment but we couldn't rush."

Iniesta: With plays like Messi's goal, technology would be ideal

Cheered by the crowd at the Estadio Mestalla, Barcelona captain, Andres Iniesta, rued the fact that there was no VAR available to ensure Lionel Messi's perfectly legitimate goal against Valencia stood.

The goal would've seen the Blaugrana go ahead and despite the bad clearly crossing the line, it was missed by the officials.

"It was very clear, the gesture of the goalkeeper, everything... " Iniesta said after the game.

"In those specific moves the technology would be ideal, and there is no doubt about whether it went in or not."

It's not the first time this has happened to Barcelona either, having had a Luis Suarez goal ruled out at Real Betis when much the same happened.

A question of whether it makes LaLiga a laughing stock arose.

"Those who have to implement it will keep taking note," he continued.

"It's very clear that there is no possible interpretation."

Lionel Messi's assist tied the game and everyone at the club was pleased by the Argentinian's renewal, signed on Saturday.

"It was a matter of time," Iniesta noted.

"It's the best news for the immediate future."

The 1-0 win over Brighton on Saturday was something of a struggle for Manchester United but it nonetheless marked a momentous achievement under boss Jose Mourinho.

While Sir Alex Ferguson could only manage 37 matches unbeaten in a row at Old Trafford during his long spell in charge, which came between April 2010 and October 2011, Mourinho has now gone 39 home matches without defeat.

That run is the same length as Sir Matt Busby's club record from 1964 to 1966 as the Red Devils have drawn 11 and won 28 of their home matches in all competitions since losing 2-1 to Manchester City in September 2016.

Claiming the outright record can be done at home to CSKA Moscow in just over a week's time with the potential 41st game of this streak up against Pep Guardiola's Citizens.

Indeed, Mourinho managed a spell of 60 home games unbeaten whilst at Real Madrid he went 43 matches without defeat at Estadio Santiago Bernabeu.

Manchester City manager Pep Guardiola said it was "impossible" for his side to go through the season unbeaten after a 2-1 win at Huddersfield Town on Sunday gave them the best ever start to a Premier League campaign.

City have been in stunning form with 37 points from a possible 39 this season and are unbeaten in 26 matches in all competitions stretching back to last term.

Ominously for their title rivals Guardiola's side show no signs of slowing down, although the Spaniard was quick to dismiss the notion that City could match Arsenal, who are the only side to finish a Premier League campaign unbeaten.

"We are going to lose a game," Guardiola told reporters on Sunday. "Today was so close. With one game a week, you are less likely to drop points, but with three games a week and four competitions, it is impossible.

"When it happens, I want to see how we are going to react.

Arsenal's '2003-04' Invincibles', Jose Mourinho's Chelsea side who won a Premier League-record 95 points the next season, and the Cristiano Ronaldo-inspired Manchester United of 2007-08 are among the teams touted as the Premier League's greatest.

But City are now firmly entrenched in that debate and, in blazing to an eight-point lead after 13 games, they have set an unprecedented level of performance in the Premier League.

While their seemingly unstoppable rise has been built upon their irresistible attack, it was resilience that saw beat promoted Huddersfield for their 18th successive victory.

City posses an attacking arsenal few sides in world football can match, but it is perhaps the form of their rejuvenated England winger Raheem Sterling that will please Guardiola most.

The 22-year-old had struggled for consistency since his big-money move from Liverpool in 2015, but has now scored 12 goals in 18 appearance in all competitions -- his best return in any single season.

On Sunday he was at the heart of City's best play, winning the penalty for Sergio Aguero's equaliser before bundling home the winner in the 84th minute.

"It's not just about how many goals he scores or how many chances he creates," Guardiola said.

"It's also about how he keeps the ball and his movement. He is still young and we can improve him to become a better player. We are so happy with his performance."

Email : [email protected]
Προηγούμενο : A Super XI made up of players at zero cost | Επόμενο : Latest Cristiano Ronaldo statue revealed: Is it better than the last one?
Προβολές : 595
- 7286 προηγούμενη ημέρα