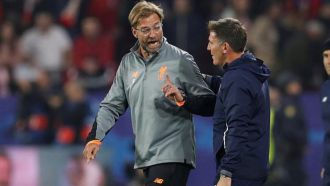 Sevilla's Guido Pizarro scored a 93rd-minute equaliser to complete an incredible comeback from three goals down to draw 3-3 against Liverpool on Tuesday in a pulsating Champions League Group E clash.

Liverpool were on the verge of sealing qualification to the last 16 for the first time since 2009 but Pizarro stabbed home from a corner deep into stoppage time to deny them.

Sadio Mane headed home in between two Roberto Firmino strikes to put Liverpool three goals up within 30 minutes, but Sevilla came back from the dead after the break.

Wissam Ben Yedder netted twice before Pizarro's late equaliser, leaving Liverpool top with nine points, Sevilla second with eight and Spartak Moscow third with six, after they drew 1-1 with Maribor in the group's other game.

Liverpool, who won the Champions League in 2005 after coming from three goals down against AC Milan in the final, were given a taste of their own medicine at the Ramon Sanchez-Pizjuan and must now avoid defeat against Spartak to qualify in their final group game on Dec. 6.

"It feels like we lost but we didn't lose. There is a game to go and it's still in our hands but at the moment it feels really bad," Liverpool manager Juergen Klopp told BT Sport.

The German's side tore into the hosts from the off with Firmino pouncing in the second minute after Georginio Wijnaldum flicked Philippe Coutinho's corner into his path.

Mane doubled the lead in the 22nd minute as Liverpool scored an almost identical goal to their first. This time it was Firmino flicking Coutinho's corner towards Mane, who dived in to head home.

The forward turned provider eight minutes later when his shot was tipped into Firmino's path by Sergio Rico, leaving the Brazilian a tap-in for the third.

Liverpool's defensive frailties, however, were exposed as Eduardo Berizzo's side completed a year unbeaten at home in all competitions, with two Alberto Moreno errors helping them on their way.

The Spanish left back helped out his former club by conceding a silly foul to the right of the area and Ever Banega's free kick was headed in by Ben Yedder in the 51st minute.

Moreno then brought down the French striker in the area just before the hour mark and Ben Yedder found the net with the resulting penalty twice, after his first effort was disallowed for encroachment, before Pizarro's last-gasp equaliser.

"When you are faithful to attacking play, football ends up paying you back," said Sevilla coach Berizzo.

"Football shows you should always keep believing and that is what happened today."

Zidane: We knew that the goals from Ronaldo and Benzema would come

Real Madrid coach Zinedine Zidane said it was only a question of time before the goals from Cristiano Ronaldo and Karim Benzema would start to flow again with both getting a brace against APOEL.

Los Blancos had been struggling for goals and went into the Champions League game on the back of a 0-0 draw in the derby with Atletico Madrid last weekend.

"I am happy for them and they will keep working now," explained Zidane of Ronaldo and Benzema.

"We knew that this was going to happen, that the goals would come. You need to keep working, we know they are two very good players and now we need to focus on the next game.

"We are calm, we have had some bad moments but we will also have some good ones.

"We are on a good run as recently we have been doing things well. It is not easy to score six goals against any team and it is not right to say that it is because you are against a weak side."

Zidane decided to rotate the squad against APOEL playing four in midfield an including Asensio and Lucas Vazquez.

"All the players are focused and ready to play," he continued.

"It is good that some who have not been playing as much have had minutes here."

In particular, Zidane was pleased for Benzema.

"It is not that Benzema was suffering but because he doesn't speak a lot, like me, it means that he keeps it inside to an extent. I don't think it is a big issue because he is a level headed player."

Whilst his domestic drought continues, Cristiano Ronaldo maintained his Champions League form with his two strikes against APOEL taking him to a grand total of 100 European goals for Real Madrid.

The victory over the Cypriot side was a much needed confidence boost for Los Blancos, especially after the Madrid derby draw left them an entire 10 points behind Barcelona at the top of LaLiga.

Of Ronaldo's 100 continental goals for Los Blancos, 98 have come in the Champions League whilst the other two were in the UEFA Super Cup.

His tally of eight in the competition this season has him placed as the top scorer, he is also on the cusp of making even further history.

Scoring against APOEL marked the fifth successive Champions League matchday in which the former Manchester United forward has found the net, he is now just one match shy of Burak Yilmaz's record of six from the 2012/13 season.

To date, only two players have managed to start the Champions League by scoring in the opening five matches, Alessandro Del Piero was the first in the 1995/96 season whilst Sergei Rebrov followed suit in 1997/98.

Ronaldo has scored in nine of Los Blancos' last ten European matches; this run has seen him register a total of 18 goals.

As one of the most reliable goal-getters in European football, Mauro Icardi could be on his way to Real Madrid, according to Daniele Massaro.

Although he's often known for his off-field antics as much as his striking abilities, the Argentine is very highly-rated at current club Inter and could be an option for Los Blancos to increase their firepower.

"I can tell you that, next year, Icardi will be at Real Madrid in [Karim] Benzema's place," former Fiorentina and AC Milan forward Massaro told Premium Sport.

Icardi's record of 13 goals in this season's Serie A has him second on the scoring charts and far clear of Benzema, who has mustered only a single strike for Los Blancos in all competitions.

With a contract until 2021, Icardi could command a transfer fee upwards of 100 million euros, according to La Gazzetta.

Manchester United manager Jose Mourinho said he hoped defender Chris Smalling did not get called up by England because his players often returned from international duty with "real injuries".

The Portuguese's comments at a news conference on Tuesday came in the wake of Smalling's England and club team mate Phil Jones returning from the recent international break with a knee injury.

Jones will miss Wednesday's Champions League clash at Basel and the visit of Brighton and Hove Albion in the Premier League on Saturday, Mourinho said.

England's next matches are against Netherlands on March 23 and Italy four days later.

"I hope (Smalling) doesn't get his spot (in the England team) because somebody comes (back) injured, he comes injured, Jones comes injured and real injuries," Mourinho told reporters.

"Our injuries are real injuries. Jones does not play tomorrow and I can say in advance he doesn't play the weekend too.

"Smalling is playing all the time and... tomorrow plays again. We don't have Jones, we don't have Eric Bailly again, so Smalling has to play every match and well."

Centre back Bailly could be fit for the weekend, while striker Zlatan Ibrahimovic, who returned from a long-term knee ligament injury last weekend against Newcastle United, will start on the bench in Switzerland.

Mourinho said United's doctors had not been informed about Jones receiving pain-killing injections before facing Germany at Wembley, the game in which he was injured, but ruled out taking the lack of communication up with England boss Gareth Southgate.

"I'm not a doctor," he said. "(The England doctors) consult my doctor in relation to Jones with a little problem in the knee when the national team starts working and then no more contact.

"And then the local injections before the match, we were not informed. Apart from that I don't have to speak with Southgate."

Mourinho said his comments about Smalling were from a selfish perspective and added that in reality he wanted his players to be happy and play for their national teams.

"I say in a selfish perspective but it is not a real perspective because what I want is my players to be happy and go to the national teams and an event like the World Cup," he said.

United top Champions League Group A with 12 points from four matches, while Basel are second on six points, ahead of CSKA Moscow on goal difference.

Koke: The fans will get behind Griezmann

Atletico Madrid midfielder Koke is confident that the fans will get behind Antoine Griezmann when they take on Roma despite his poor form and comments he has made about leaving the club.

Diego Simeone's side have had a poor run so far in the Champions League without a win that has left them third in group C with three points. Roma are top on eight and Chelsea are a point behind them.

"The fans will support Antoine as it (whistles) wouldn't help anyone, neither him nor the rest of us," said Koke.

"He is big enough and knows what to do. He will give his all and then later we will see if he can get the goals but we are sure he will have the backing of the fans.

"We have to focus on our position and winning which will keep us alive in the group. After that we will have to wait but if we do not win tomorrow then we will not be able to do anything.

"Never before have we been in this situation and we need to learn to adapt to it."

Koke believes that the team is where it is because they have not been able to get the results to match the performances.

"We needed to win a game and in Rome we played well but we did not win," he continued.

"Against Chelsea we lost when we looked as though we were going to draw and we were unable in both games against Qarabag."