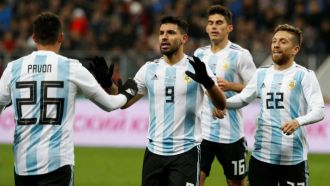 Aguero taken to hospital after fainting during Argentina game

Argentina striker Sergio Aguero collapsed in the dressing room at halftime before they lost 4-2 to fellow World Cup qualifiers Nigeria after taking a two-goal lead in a friendly in Krasnodar, Russia on Tuesday.

The Argentine Football Association (AFA) said in a statement that Aguero, who scored in the first half, was taken away for routine examinations but added: "The player is well".

His Premier League club Manchester City said the 29-year-old Aguero had been cleared by doctors to return to England as planned after he suffered what they called "a dizzy spell".

"Sergio never lost consciousness, and was taken to hospital for precautionary medical checks," City said on their official website (www.mancity.com).

Argentina coach Jorge Sampaoli rested Lionel Messi following the 1-0 win over next year's World Cup hosts Russia on Saturday and it seemed that they could cope without him.

Ever Banega curled in a free kick, awarded after Nigeria goalkeeper Daniel Akpeyi picked the ball up outside his area, in the 28th minute and Aguero finished off a sweeping counter-attack eight minutes later.

First, he emulated Banega by scoring from a free kick on the stroke of halftime and then set up the equaliser by pulling the ball back for Alex Iwobi to net seven minutes after the re-start.

The Super Eagles took the lead two minutes after that when Brian Idowu sidefooted home from the edge of the area to finish off a counter attack.

A superb goal by Iwobi completed the comeback in the 73rd minute as he collected the ball, slipped it between Javier Mascherano's legs and fired past Agustin Marchesin.

Argentina staggered through their World Cup qualifying campaign, only clinching their place at the finals with a 3-1 win in Ecuador in their final match.

"My biggest worry was the way the team played when we were behind. I know we are capable and have the individual talent to be able to get out of these situations and I'm worried about what happened tonight.

"We played an incredible first half but we lost our way in a match which could confuse a lot of people."

Aguero will be assessed by Manchester City's medical team ahead of this weekend's Premier League trip to Leicester City.

Cristiano Ronaldo: A man who wants so much

Every player needs to fulfill their goals, have a sense of worth and to feel on top of the world from time to time, however with Cristiano Ronaldo he is accustomed to the extreme end of these emotions, which he is currently being deprived of.

History so often informs us of what the future may hold, and this can be the same for the Portuguese winger. Look back only as far as 2016 and he was seen to be the leader of all men.

His Real Madrid had won the Champions League, he lifted the European Championship trophy with Portugal, and he won the Ballon D'or for the fourth time as life could not get any better for the forward.

Furthermore, his numbers were starting to outstretch everything football had ever seen. Ronaldo did not feel inferior to anyone and he was fighting to be the best he could possibly be.

And yet, the striker has seen in recent months the signing of Neymar for Paris Saint-Germain and the bumper salary boost awarded to Lionel Messi that left the Madrid star behind both in terms of their pay packets. Although, he can take great heart from leading the way on the advertising and sponsorship front.

Denmark's Christian Eriksen scored a hat-trick in a 5-1 thrashing of a disjointed Ireland in their playoff second leg on Tuesday to secure the final European berth at next year's World Cup.

Denmark trailed to an early Shane Duffy header but took control immediately and struck twice in three minutes, first when Andreas Christensen's stabbed effort on the half hour mark hit the post and went in off Ireland's Cyrus Christie.

That was followed by a superbly swept home second from Eriksen, who then made sure of victory with a left-footed effort on 64 minutes and completed his hat trick following poor defending 10 minutes later.

Nicklas Bendtner added a late penalty for the Danes, who reached their fifth World Cup having been frustrated by a well-organised Irish display in a scrappy goalless first leg.

"We were well beaten in the end, no question about that... The goals were so sloppy," Ireland manager Martin O'Neill told Irish national broadcaster RTE.

It had all looked so different for Ireland when Duffy took advantage of some poor defending to put the hosts ahead.

Nicolai Jorgensen sliced an innocuous long free kick towards his own goal and into the path of the Brighton and Hove Albion defender who beat Kasper Schmeichel to the ball and sent the packed Aviva Stadium wild.

Denmark refused to panic, however, sewing fears among the home fans that they scored too early as Ireland keeper and first leg man-of-the-match Darren Randolph saved well from William Kvist and Pione Sisto after his defence was carved open.

Ireland tried not to sit back and contributed to the blistering start with two quick chances of their own with big striker Daryl Murphy rippling the side netting with a deft flick and James McClean dragging a shot wide.

Ireland boss O'Neill predicted his side would need to score two goals to end their 16-year World Cup appearance drought and that briefly looked like being the case when Sisto's nutmeg of Harry Arter from a short corner led to Denmark's leveller.

Stephen Ward then carelessly lost the ball on the halfway line and it made its way to Eriksen whose edge-of-the-box strike went in off the crossbar.

The hosts never looked like threatening and fell apart as they were easily picked off on the break with Eriksen curling in the pick of the bunch from outside the box and then hammering home his 11th of the qualification stages.

"It's a crazy feeling right now, we've been fighting together for so long," Eriksen said.

Most Irish fans, in raucous voice only an hour earlier, had streamed out of the stadium before Bendtner completed the humiliation.

Belgium striker Romelu Lukaku became his country's leading scorer at the age of 24 when his goal gave them a 1-0 win over fellow World Cup qualifiers Japan in a friendly in Bruges on Tuesday.

In a game that Belgian officials said was nearly called off after a terrorism scare, Lukaku scored with the easiest of headers at the far post from Nacer Chadli's cross to take his tally to 31 goals in 65 appearances.

Belgium extended their unbeaten run to 15 games, their last defeat having come against Spain in a friendly in September last year.

The Belgian football association, quoted by public broadcaster RTBF, said that in the end there had been no danger to the public, although extra security measures, including metal detectors, meant many fans were late taking their seats.

Bruges police told local media they had been warned by the federal authorities shortly before the kick-off of a possible attack during the match, prompting the additional checks.

Belgium has been on high alert since Brussels-based Islamic State militants attacked Paris, including a France-Germany soccer friendly in the city, two years and one day ago. Brussels itself was attacked by IS suicide bombers in March last year.

Ventura an easy scapegoat but Italy has deeper problems

With his monotone delivery and forlorn expression, Italy's veteran coach Gian Piero Ventura would make an easy scapegoat for the country's astonishing failure to qualify for the World Cup in Russia.

He baffled them by fielding an unfamiliar and open 4-3-3 formation which barely any other teams use, then suddenly switching to a 3-5-2 for the two-leg World Cup playoff against Sweden.

He praised his players for trying to play his brand of football, without really explaining what that was.

And, having insisted that his mission was to rebuild an ageing team, he fielded a defensive quartet -- including goalkeeper Gianluigi Buffon -- with a combined age of 138 in Monday's decisive 0-0 draw at home to Sweden.

Ventura refused to step down after the match but is widely expected to lose his job this week.

But the fact that the nation's football federation (FIGC) turned to the journeyman coach in the first place may have simply highlighted the many problems facing Italian football.

As with many other countries, Italy's most illustrious coaches such as Antonio Conte, Carlo Ancelotti and Massimiliano Allegri, prefer to work with top club sides and their huge financial resources.

The FIGC managed to lure Conte into the job after the 2014 World Cup but the current Chelsea manager implied that he was bored when he complained of the long gaps between matches. He also got into a row with clubs over the release of players for training camps and left after Euro 2016.

Conte's predecessor Cesare Prandelli appeared to hit the nail on the head when he said that national team matches were treated as an unwelcome distraction to the club season and that interest only really picked up for major tournaments.

Italy's failures are not recent: they have been eliminated in the group stage at the last two World Cups, results including a shock defeat to Costa Rica in 2014. Since lifting the trophy in 2006, they have won only one game out of six at the finals.

The domestic game is also struggling. Serie A, once the world's richest league, has lost its allure, unable to attract the same television money as its English and Spanish counterparts.

The FIGC itself is seen as the problem by many with some media calling for a clearout of officials on Tuesday.

Its president Carlo Tavecchio was elected in 2014 amid a racism row after giving a speech in which he talked of a fictitious African player he named Opti Poba "eating bananas".

Tavecchio, who denied that his comments were intended to be racist, was still elected with the support of the third and fourth tier clubs and amateur leagues who hold the balance of power in FIGC elections.

Still, Serie A appears to have turned a corner with more clubs owning their own stadiums, Juventus reaching two Champions League finals in three seasons and Napoli playing some of the most exciting football in Europe.

The question is whether the FIGC will opt for a wholesale overhaul of their football, as Germany did in the early 2000s, or whether a simple change of coach will do the trick.

It is only a few months since Ventura himself was praising Italy's young generation of players such as Federico Bernardeschi, Daniele Rugani, Alessio Romagnoli, Gianluigi Donnarumma and Davide Zappacosta.

"The feeling is that they're building something important," said their 2006 World Cup winning coach Marcello Lippi after a 0-0 friendly draw against Germany last year. "There is a wave of interesting young players."

As recently as August, the FIGC were so pleased with Ventura's progress that they gave him a two-year contract extension, taking him until 2020.

Buffon who ended his 175-match international career on Monday, insisted that Italy would be back. "There's definitely a future, because we have pride and strength," said the tearful goalkeeper.

"We're stubborn and hard-headed. After ugly falls, we find a way to rise back up. A lot of these kids are talented -- I wish them a lot of luck."