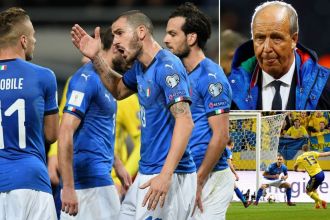 According to legend, San Siro (Saint Syrus) was the boy who brought a basket of bread and fish to Jesus before the miracle of feeding the 5,000.

Tonight in the Milan stadium known by his name, the whole of football-mad Italy will be praying for more divine intervention to avoid a summer of purgatory.

Only once, way back in 1958, have the Azzurri failed to qualify for the World Cup.

But after Friday night’s unholy 1-0 defeat by Sweden in the first leg of the playoffs, the four-time winners are 90 minutes from the stigma of making more unwanted history.

Even the 1966 team pelted with tomatoes after losing to North Korea reached the finals in England.

Fabrizio Ravanelli, who helped Italy win their only previous playoff against Russia in 1997, said: “I wouldn’t watch a World Cup without Italy.”

There is no doubt who will get the blame if Italy are not back in Moscow next summer.

Since the Solna defeat, there have been calls to replace journeyman coach Gian Piero Ventura (below) with Carlo Ancelotti or previous boss Antonio Conte even if they qualify.

At Euro 2016, Conte inspired an ordinary squad to beat Belgium, Sweden and Spain before only losing to Germany on penalties in the quarter-finals.

In World Cup qualifying, Ventura deployed a suicidal 4-2-4 formation while losing 3-0 to Spain before drawing at home with Macedonia – and had to deny leading players like Gigi Buffon had called a crisis meeting without his knowledge.

The Italy coach has failed to find a role for the in-form Lorenzo Insigne and the Napoli forward only came off the bench for the last 15 minutes in Solna.

Sweden full-back Emil Krafth admitted: “Obviously I preferred to be up against Matteo Darmian instead of Insigne.”

Sweden won through a deflected shot from Jakob Johansson, but set the tone after 30 seconds when Ola Toivonen elbowed Leonardo Bonucci and broke his nose.

Striker Marcus Berg, who was booked within 50 seconds, said after the match: “I knew there would be war tonight and it will be a damn war on Monday.”

Ventura added: “I hope that in Milan the officials give to us what they granted to them here.”

The only previous time Italy failed to qualify for the World Cup was after losing 2-1 to Northern Ireland in freezing Belfast in January 1958.

Afterwards I cried all night – for the lost opportunity and very much for shame. I missed a chance because I slipped close to the goal because I had the wrong studs on.

“It is a game I still cannot believe. Even now, I still dream about that missed chance.

“If I had scored, it would have maybe changed the history of Italian football. I hope we stay the only ones in history not to qualify.”

Italy came closest 20 years ago when 19-year-old Buffon came off the bench to make his debut in snowy Moscow as his side drew 1-1 before Chelsea’s Pierluigi Casiraghi scored the winner in the return leg.

The Juventus goalkeeper, who will win his 175th cap tonight, could now go full circle and finish his international career in the playoffs as he had planned to retire after a sixth World Cup.

“The important thing is the result is the same as in 1997,” said Buffon.

His former team-mate Ravanelli added: “Our players have to be aware that Italy’s failure to qualify for the World Cup in Russia would be a catastrophe.

“I don’t even want to think about it. Winning is important not only for the players, but for the whole country. Can you imagine a World Cup without Italy? I can’t.”

Benzema: Cristiano Ronaldo is more selfish than me but that's normal

Yet another international break has arrived and Karim Benzema continues to be left out of Didier Deschamps' plans, and while domestically he and Cristiano Ronaldo continue to struggle for goals, the French forward has confessed that the Portuguese forward is more selfish than he is.

With Real Madrid facing the task of overturning an eight point deficit between themselves and Barcelona, it is imperative that Benzema finds his domestic form as quickly as possible.

"[Ronaldo] is more selfish than me, but that's normal," Benzema explained in an interview with Canal+.

"We get along well, I like to play with him.

"In the end, his selfishness doesn't bother me, it is good for the team."

One of the more unfortunate parts of the season for the French forward has been the criticism he has received from his own supporters.

Poor form and missing clear chances happens to any striker, however Los Blancos fans have made clear their own frustrations with booing and whistling, something which hurts the former Lyon goalscorer.

"It's difficult, especially in Spain, where sometimes you don't understand it," he admitted.

"The hardest part is when the criticism comes from your own fans.

"They are normally there to boost you."

As Deschamps' exile of the forward continues it has become abundantly clear that Real's main central striker will not be playing at the World Cup in Russia.

"It's complicated, I'm not stupid but I want to win something with my country," he confirmed. "I love football, I love these tournaments.

"The pressure to succeed with your country is something else, I hope my situation can change."

"As long as Deschamps is coach, I will not have the chance to return to the national team," he intimated.

"It's been more than two and a half years, it doesn't take much to understand what is going on. He is someone I respect, but he turned his back on me, it's hurtful."

Gareth Bale may have suffered yet another injury setback in his battle to return to action, yet the Real Madrid directors are adamant that they will not abandon the Welshman.

While many outsiders have suggested it is time to move Bale on from the club, nobody in the offices of the Estadio Santiago Bernabeu is paying any heed to these calls for change.

It is true that the new injury is viewed as most unwelcome by those in charge at the capital city club, especially given that they hoped he could be a real difference-maker for this current squad, but there is a sense that the player needs protected now more than ever.

The forward is going through one of his worst experiences since moving to Spain and there is no plan to leave him high and dry, with Bale instead being given every type of support from Florentino Perez and Zinedine Zidane, among others.

As such, any decision about his Real Madrid future will be taken next summer, rather than in the heat of a frustrating moment.

Those in charge at Los Blancos are well aware that the 28-year-old would fetch a significant transfer fee from the Premier League so the possibility of an exit does exist, but they are also confident that he can return to fitness and form, while the player's desires will obviously factor into any decision too.

Messi: I was embarrassed to cut short Argentina retirement

The shock international retirement made by Lionel Messi after the Copa America Centenario left Argentina stunned and thus it was the man himself who felt a tinge of shame when finally returning to the fold.

Recently firing his country to the World Cup, it had initially seemed that the Barcelona star's last involvement with La Albiceleste was to be a missed penalty in the 2016 tournament's final versus Chile.

"[Retiring] was a decision I made in the heat of the moment," confessed Messi to DirectTV Sports.

"But I was embarrassed to say that I wanted to come back.

"[The coach at the time, Edgardo] Bauza and my teammates made everything easy for me to return to."

Since being reintroduced to the Argentina team, Messi has seen things in a different light and is less bothered by criticism of his contribution.

"At 30 years old, I now enjoy it in a different way and much more than I did before, I take advantage of every moment, both on and off the pitch," he noted.

"I am experiencing this period with the national team in a different way, I am more relaxed. When they criticise me, I experience it differently."

There is only one footballing prodigy that fans want Real Madrid to bring into the senior setup and that is Vinicius Jr. following the Brazilian's form at Flamengo.

MARCA asked readers to vote in a poll of all of Los Merengues' players currently out on loan and the hotshot forward was the only one to get a majority vote in favour of him being installed in the first-team as soon as possible.

With almost 50,000 fans having entered the poll at time of writing, 55 percent voted in favour of Vinicius being ready for a shot at Estadio Santiago Bernabeu.

No other player earned a majority backing from the readers to return to Madrid but Federico Valverde, currently on loan at Deportivo La Coruna, was close with 42 percent considering the Uruguayan ready, the same number awarded to Martin Odegaard.

With Freiburg awarding Austrian defender Philipp Lienhart game time in the Bundesliga, the 21-year-old also landed on 42 percent in the poll while only 15 percent considered Cruzeiro loanee Lucas Silva ready for a run in Real at this moment in time.